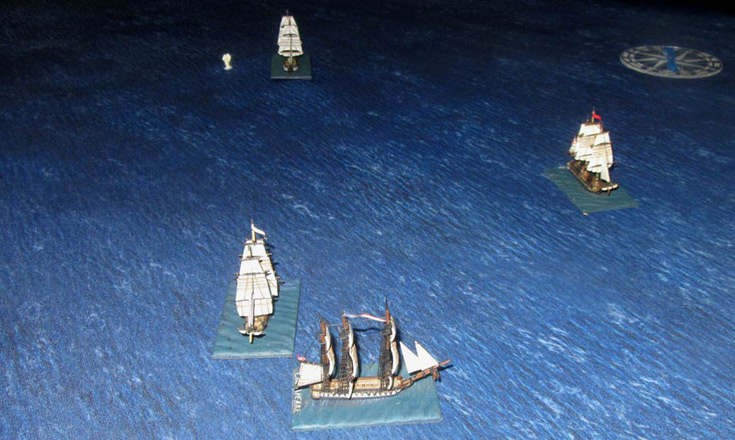 We fancied a trip to the sea this week, and opted for a frigate action. While we use Far Distant Ships for fleet actions, for the smaller stuff I opt for Post Captain, from the same people who produce General Quarters. While they claim you can fight large battles with them, I wouldn’t like to try it. For frigate actions though, they’re ideal – just the right level of detail to produce the right period feel. 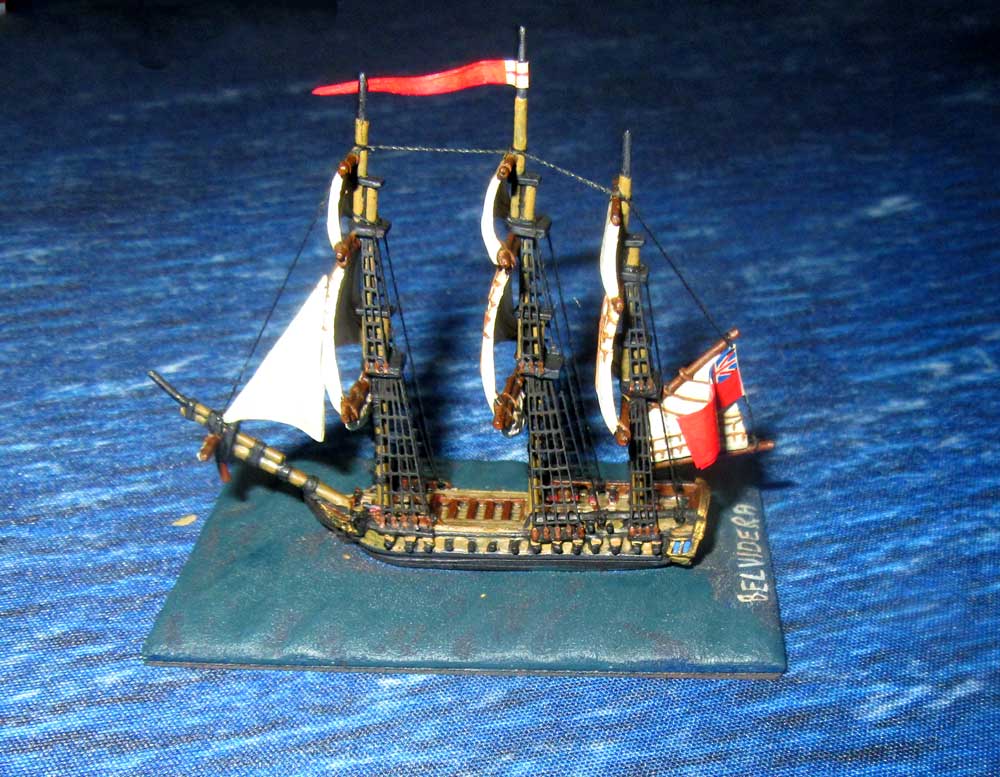 In this game, fought of the Massachusetts coast a little north of Boston, the premise was that the 38-gun frigate USS Chesapeake was returning to the port after a cruise. Lying well off the harbour were two blockading frigates, HMS Belvidera of 40 guns, and the 38 gun HMS Aeolus. As the Chesapeake would have trouble fighting her way past, the 44 gun USS United States also slipped out of Boston to escort her in. 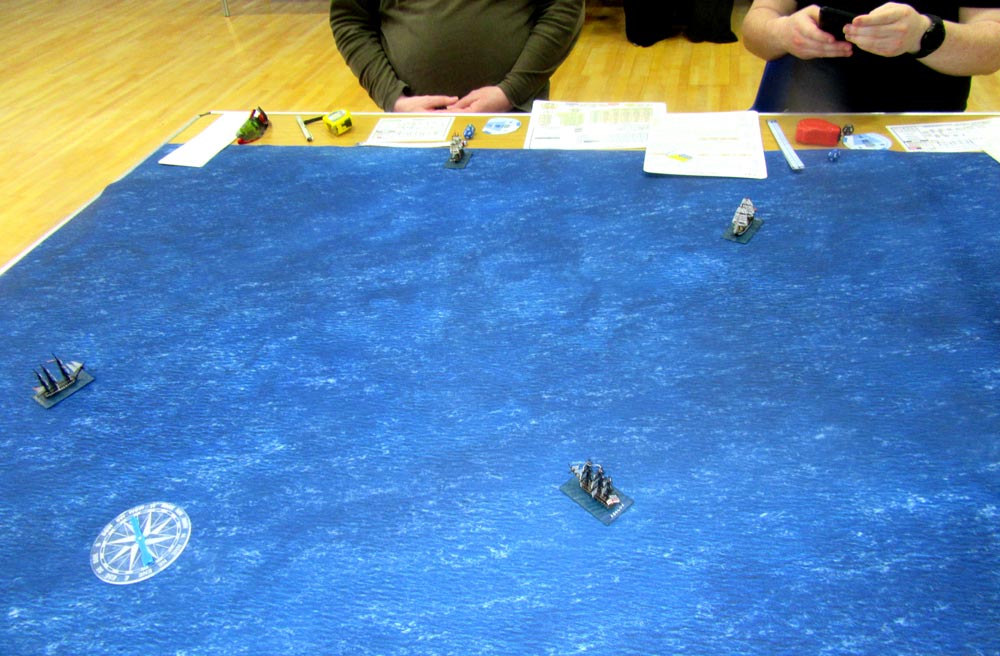 With her lethal 24pdr long guns and 42pdr. carronades , the United States was a real beast. So, to even things up we gave her a green crew.  In this one, Nick and Chris played the Americans, commanding the Chesapeake and United States respectively. For the British, Sean commanded the Belvidera while I had the Aeolus. The game was played out on a 6×4 foot table, with a fresh inshore breeze blowing from the east-north-east. It was a funny starting configuration, with the four ships at four corners of the table. That was just what the Setup Gods decreed. Still, it sort of fitted our premise for the scenario. 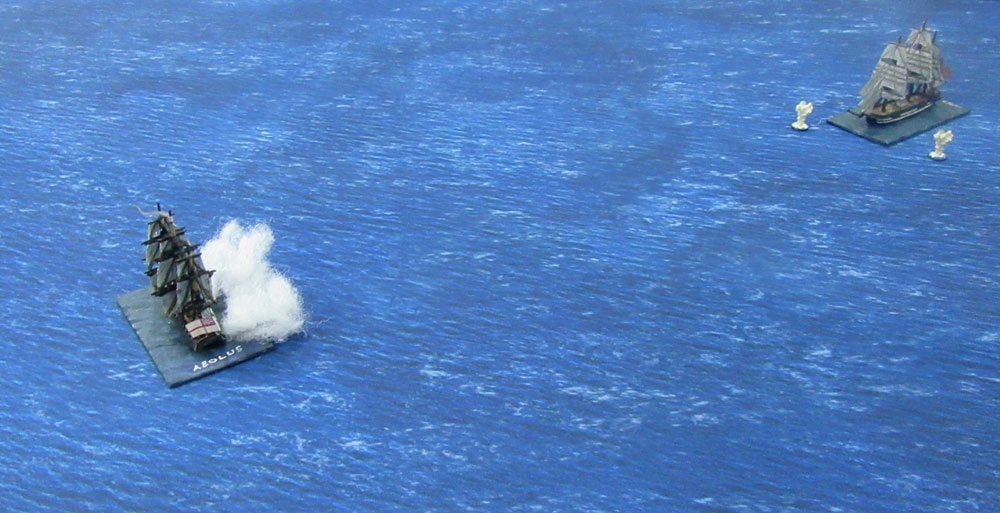 Obviously, this setup and the wind direction helped dictate the course of the game. Essentially though, Belvidera in the south-west table corner closed with Chesapeake in the south-east, while the United States shaped a course to intercept the Aeolus. She in turn was trying to avoid her, while trying to join up with the Belvidera. Inevitably then, everyone was heading for the same little patch of sea! It was the Aeolus who opened fire first, targeting the United States as she closed with her. I think I pranged some rigging though, nothing more. 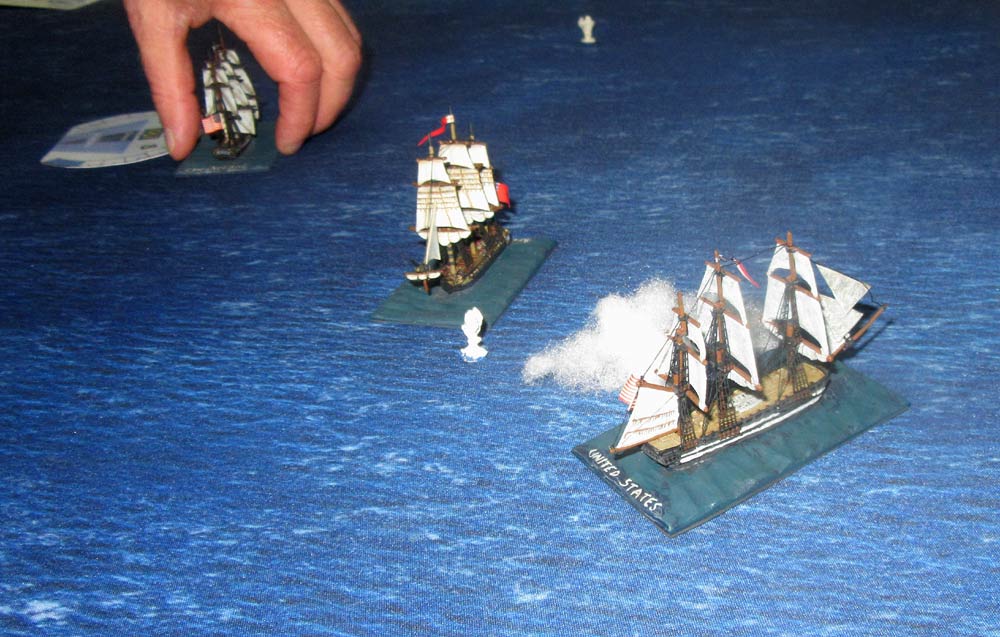 Inevitably, with the range closing things were starting to warm up. As the range dropped the big American frigate turned to starboard and delivered a thundering broadside at 300 yards. She fired at the rigging, and managed to bring down Aeolus‘ mizzen mast.  That was a pretty devastating blow, as it mean there was now little chance of dodging the devastatingly powerful United States. 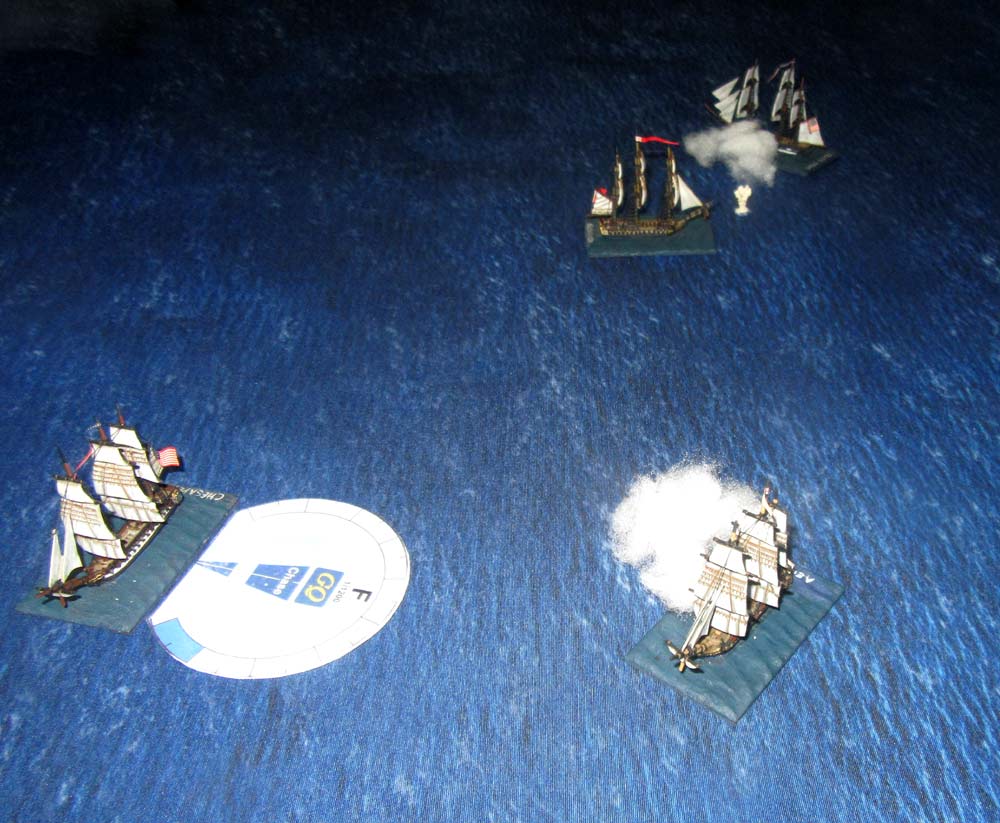 Over to the south Chesapeake and Belvidera were hammering away at each other, with the range now down to 300-400 yards. That meant both ships could use their 32pdr carronades to good effect. On the whole though, the American frigate was getting the worst of the duel. So, she turned away to the open sea, as did Aeolus, which had more thanenough of her duel with the United States.

An ineffective broadside from Chesapeake didn’t do any real damage to the battered Aeolus, but as Belvidera headed away from the United States, the crew of the Aeolus tried to reduce sail to save their other damaged masts, while also firing at Chesapeake. It was clear by now that the best course of action for the British was to try to escape. That’s why the United States clapped on full sail to give chase, firing her bow chasers as she went. That though, was when it all fell apart for the Brits. 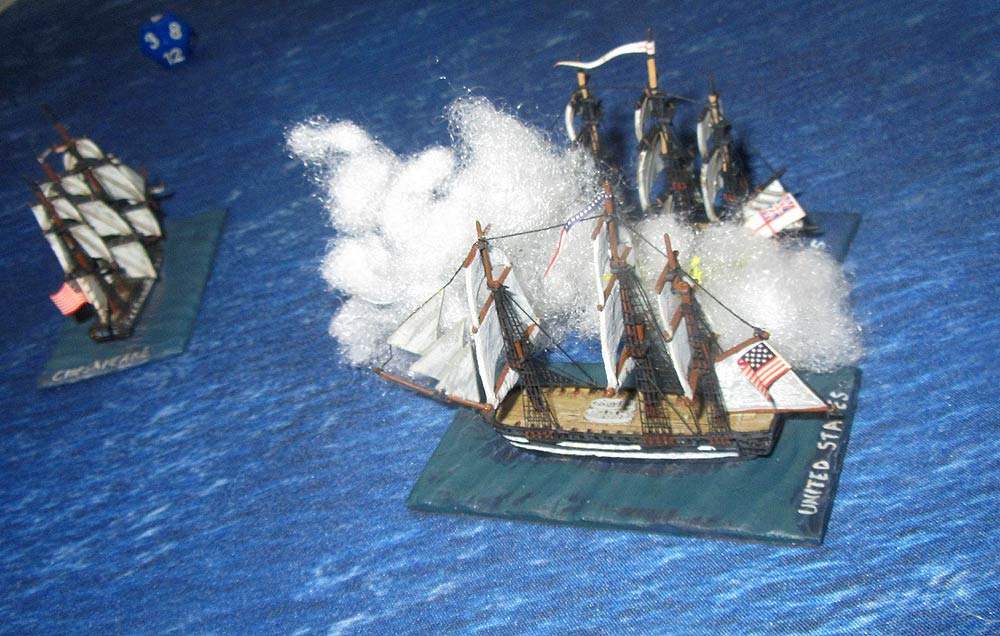 With my  wrecked mizzen draped over the side and my other masts damaged, things weren’t looking good.  So, when the United States ranged alongside Aeolus and unleashed a point-blank volley, my two remaining masts went by the board. it was a piece of inspired ship-handling by Chris, but it meant that the end of turn rigging check was a mere formality. Reduced to a floating hulk, the Aeolus was forced to strike. 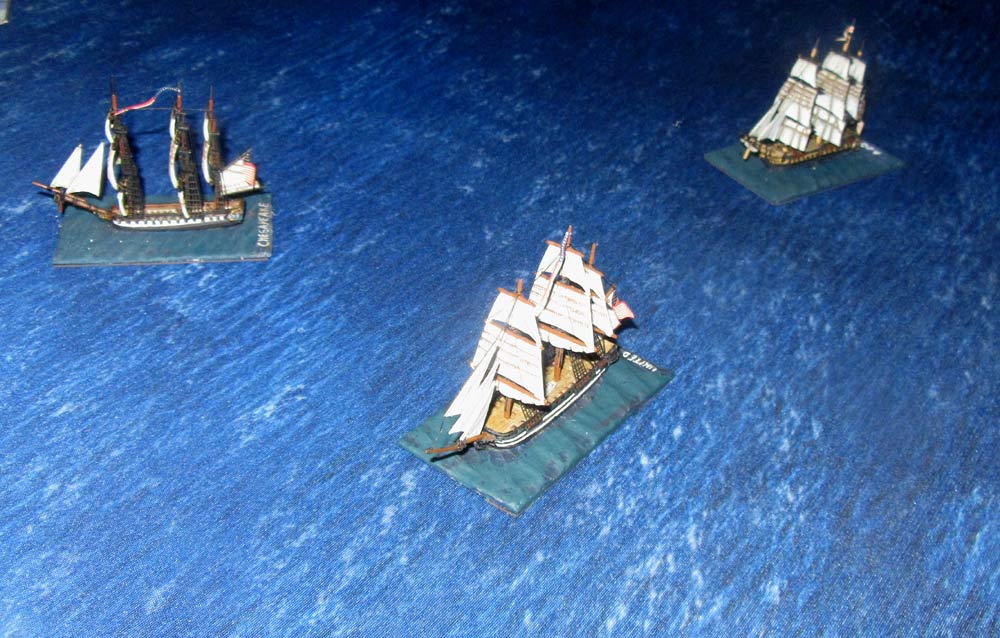 With that, it was all about the Belvidera. Abandoning the Aeolus to take possession later, the two American warships headed off after Sean’s  frigate. Unable to save Aeolus, the Belvidera headed out south, and the open sea beyond Cape Cod. She’d taken rigging hits of her own though, and so in the next Rigging Phase it all came home to roost. Her mizzen went by the board, which slowed her escape. 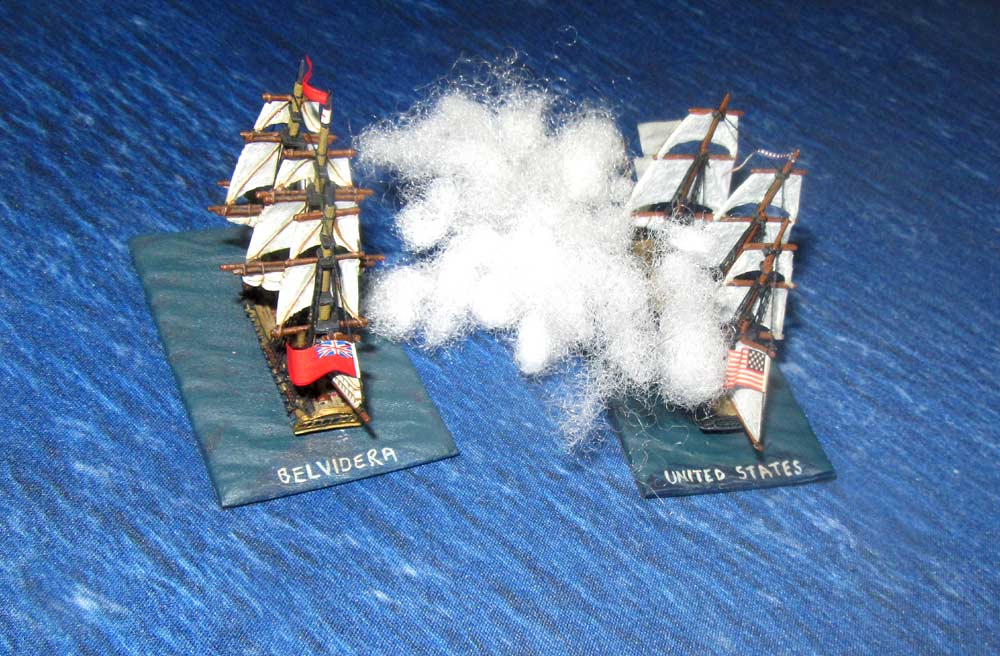 The only thing that was going to save an utter calamity for the British was nightfall. It was already almost dusk, so Belvidera kept on, hoping to make it off the table. However, before she did the United States overhauled her, and ranged alongside her starboard beam before unleashing her broadside at a range of just 100 yards. It inflicted heavy damage to the British frigate’s hull and rigging, and knocked in several gun ports. Ouch. 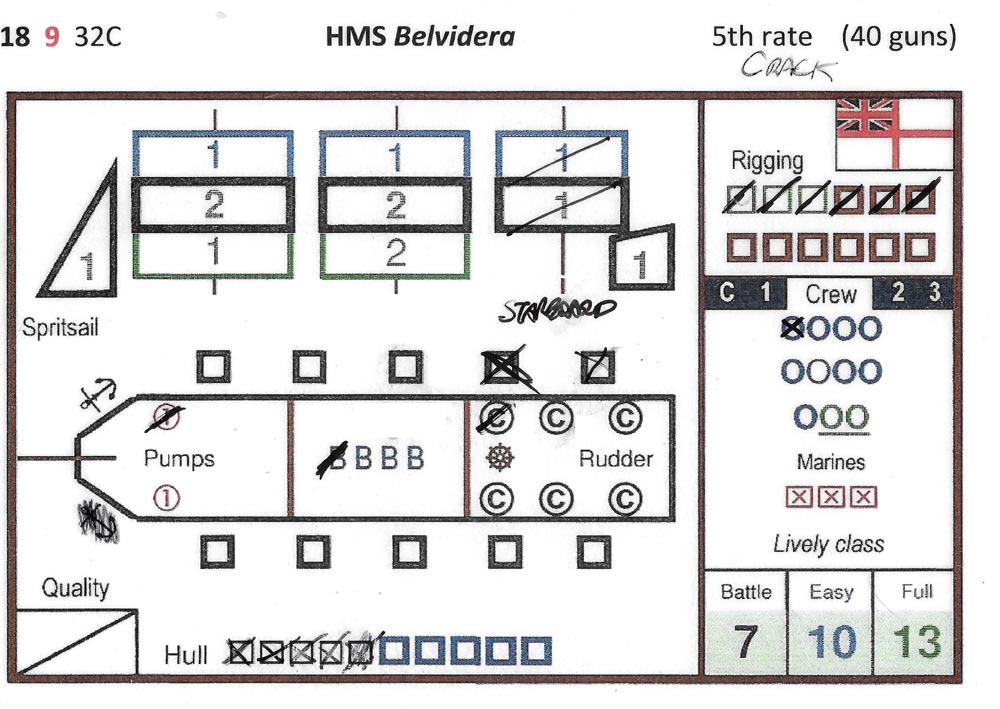 All the Belvidera did in return was to inflict a hull hit and some crew casualties on the American frigate. Still, it was enough. It was now dark, and the Belvidera slipped away, altering course to get clear of her American pursuers. Realising that a bird in the hand was enough, the two American frigates duly broke off the chase, and returned to claim their prize. It would be a wild night in Boston that evening, as the Aeolus was towed into port. The salutary lesson of course, is not to mess with American super-frigates, unless you come mob-handed! It was a great little game though, and we all enjoyed it immensely. 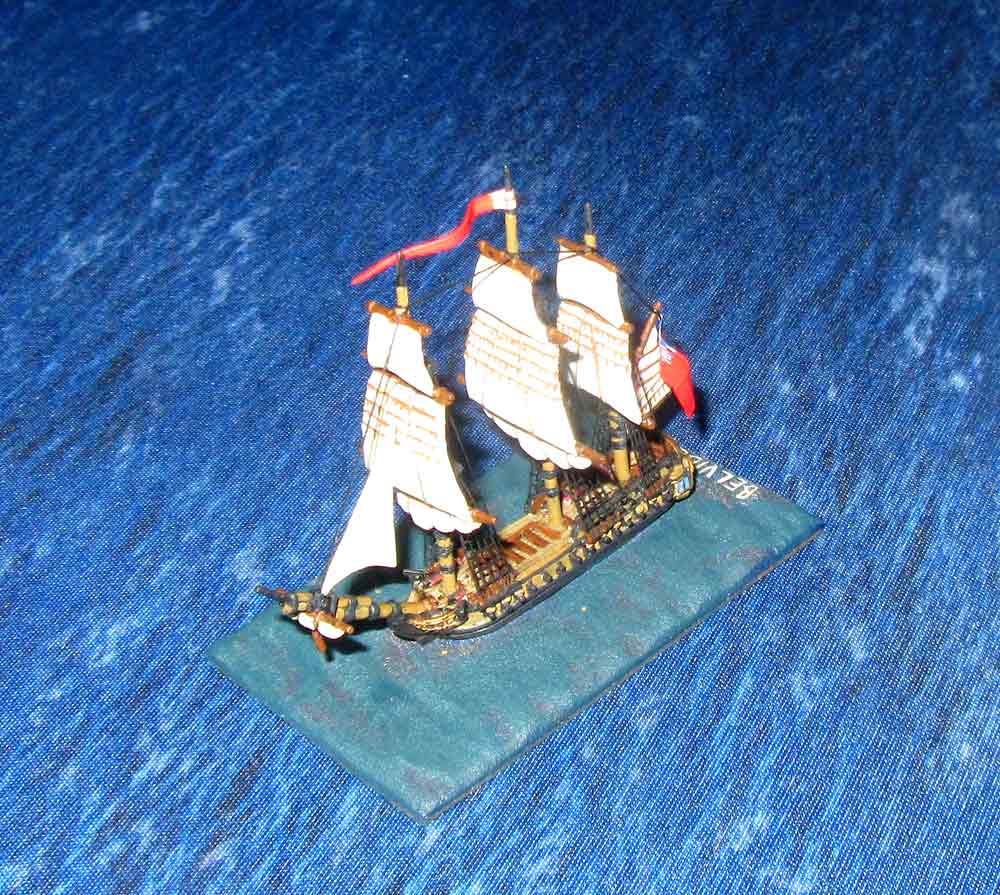