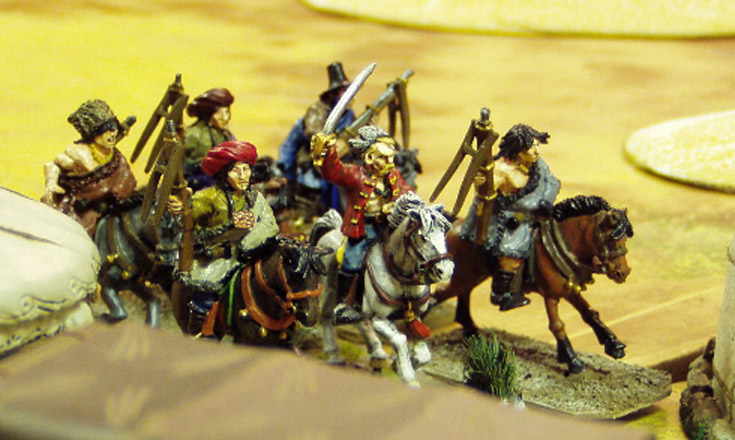 I know – we did a Back of Beyond game last week. However, wargaming buddy Dave O’Brien was able to take a break from his long-running Warhammer Ancients campaign (actually, he must have been knocked out), and he wanted to field his Chinese. As Colin Jack devised the scenario we could all expect a fiendishly unpredictable game. You really have to read the little order slips he gives you before the game. However, it true fraternal spirit my fellow Bolshevik player Dougie Trail refused to show the slip, on account of me belonging to the wrong “Red” faction. After that my Stalinist Cheka kept one eye on the enemy and the other on Dougie’s Trotskyist bodyguard!

In theory the idea was simple. Advance to the Mongol encampment in the centre of the table, bring the Mongol Princess back to Moscow for “talks” (using bribery if need be), and fend off any other factions. Of course the local Chinese Warlord also showed up, along with the “Mad Baron” and his Whites. The three-cornered contest turned into a four-cornered one when the Baron’s cavalry bribed the Mongols, who promptly joined forces with them. The Chinese seemed obsessed with looting some Mongol gold, while us Reds amused ourselves my mowing down anyone within range, regardless of nationality.

Our Bolshevik armoured car was knocked out by Chinese artillery, but fortunately our plane arrived. We had visions of chasing the Mongols and strafing them as they fled. Unfortunately after its arrival the Red team never got to move last, which meant that the fleeing Mongols always managed to stay out of our 6″ machine gun range!However, we took solace in carving up the Baron’s officer battalion, while the Chinese seemed to mill around just out of range of everyone else.

It was a crazy game, but highly enjoyable, and victory was awarded to the Baron, who swept the Mongol Princess to safety, along with all of her tribe. As usual the rules we used were the Back of Beyond supplement to Chris Peers’ Contemptible Little Armies. Simple, brutal and enjoyable…