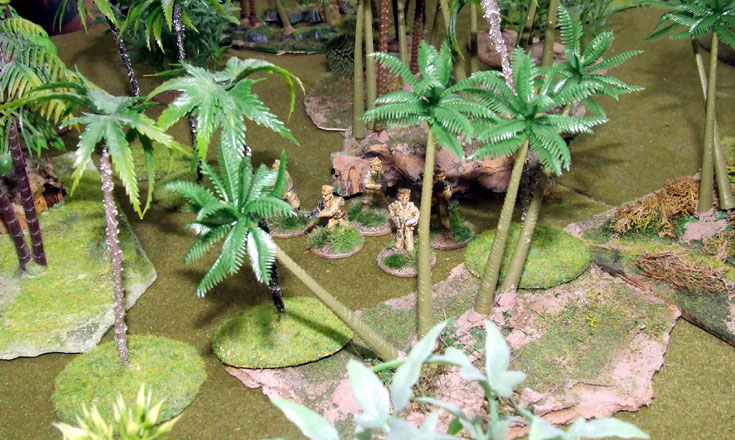 During my wargaming visit to Shetland, the original plan was to play a 15mm Second World War game set in Burma. However, drinking got in the way. Instead, Chris Brown of the Shetland Wargame Club let us use the same terrain for a couple of skirmish games using Force on Force, using my figures. The games was set during the Malayan Emergency of the early 1950’s. The first involved a raid on an Communist-held kampong (village) in the jungle.

Although the buildings were a tad small for 28mm figures, they served our purpose very well, and besides, they looked really good! The Communist Terrorists (CTs) were placed in several of the buildings, and two squads of Gurkhas deployed on two sides of the settlement. The game began with the alarm being raised by a sentry, and as the Indonesian soldiers started tumbling out of the buildings the Gurkhas opened fire.

What followed can best be described as a turkey shoot. The hapless CTsnever really stood much of a chance. One fire team after another was eliminated in the crossfire, leaving heaps of seriously wounded or dead men littering the perimiter of the village. Only two of the six teams in the village managed to escape the ambush, and even they were badly knocked around. The end result was about a dozen CTs killed, the same number seriously wounded. They along with a handful of others were captured, all for the loss of one seriously wounded Gurkha. All in all it was a good day for the British Commowealth.

The second game  involved a Commonwealth sweep through the nearby jungle known to contain CTs. Two small Gurkha squads (6 figures apiece) were joined by a five man squad of Malay police, and led by an Iban tracker. Things got off to a good start when the tracker spotted CTs in the jungle ahead of them, who had been lurking in ambush. A firefight followed in which the CTs had the worse of the exchange. The Communist player sent another team to tend to his wounded, and merged the two units to create a large, powerful squad. It then spent the game on “overwatch”, shooting at and Gurkhas who tried to move forward.

While all this was taking place two other CT units revealed themselves by opening up on the police, and effectively knocking the squad out of the game by killing two of them, and seriously wounding four more. The Gurkhas now found themselves outnumbered, and pinned down by a heavy volume of fire. On the Commonwealth right flank two small Gurkha fire teams used fire and movement tactics to outflank the large squad of CTs, and began to whittle them down.

However, on the left flank things weren’t going so well, as first one fire team then the other were silenced by the crossfire of the remaining CTs. The game ended when the Commonwealth players elected to withdraw, while there were still Gurkhas left standing to haul away the wounded.

So, in two lively and fun skirmishes the Commonwealth won one game, and lost the other. All four of the Shetland players hadn’t played Force on Force before, and were well pleased with the rules, and planned to use them for their own modern games – Cold War, Vietnam and alternative 1970s history clashes using 20mm figures.