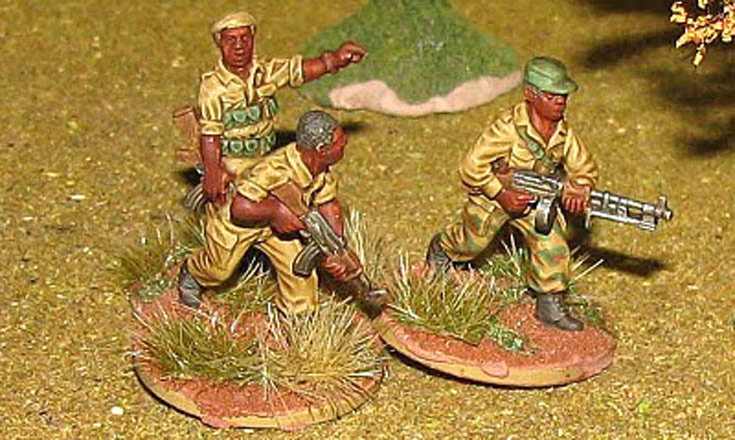 While I’ve been painting up modern figures for the Borneo Confrontation, Dougie has been beating his own path through the bush of Rhodesia. This small skirmish was another “testing the rules out” clash using the new Force on Force rules. Hid did a great job painting the lovely Eureka figures, but the terrain still needs a bit of work.

No doubt that will come. Anyway, the game involved a small Rhodesian fire team, which had set up an ambush in an old river bed – now a line of swamps and gullies. Local ZANLA (Zimbabwe National Liberation Army) forces used the river bed as a route across the Zambian border into Rhodesia, and sure enough a small ZANLA force dully appeared, the main body preceded by two scouts on point.

The point men failed to spot the ambushers until it was too late, and when the Rhodesians opened fire they were both cut down. That, of course, is where it all went wrong for the white guys. The rest of the ZANLA force went to ground, and fired on the ambushers from two different directions. What was a great ambush position soon turned out to be a rather exposed location, good for concealment, but bereft of hard cover. The tooled-up guerrillas actually out-gunned the ambushers, and within a couple of turns of fire the bulk of the |Rhodesian ambush team were killed or wounded, for the loss of only two of the enemy.

The game was all over in a few turns – a pretty good reflection of a close-range modern firefight. In fact, it was all over so quickly that the two players – Dougie and Dax – staged a second game, using Dax’s figures. With hindsight Dougie, playing the Rhodesians felt he’d left it too late to spring the ambush, allowing the ZAPLA squad to approach too close to his position. By firing earlier he would have been able to make better use of his superiority in troops quality. Instead, at nearly point-blank range even the worst-trained guerrilla could probably hit a target in soft cover by spraying the bush with his AK-47.

Once again the rules proved quick, pretty simple, and produced a realistic result. However, the system might be basic, but both players felt they really needed to hone up their tactical skills before the next game, as with these rules it really pays to know the best way to behave in a firefight – decisions like whether to shoot, scoot, or simply hug the dirt are made in split seconds in the game – just like the real thing – with the big difference that in this case, the loser can simply pack his toys away and try another day.