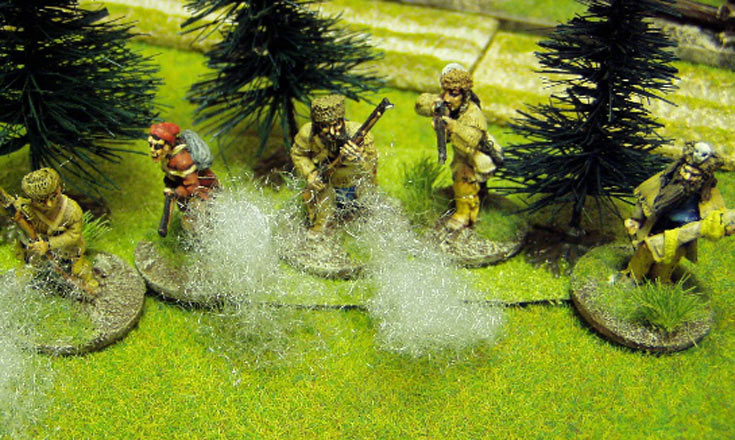 I’m not usually a fan of skirmish games, but we hadn’t played this for a while, I had a new unit which needed to be blooded, and so we gave the period another go. The premise was that two Abenaki war parties (2 x 20 figs.) – one supported by French Coureurs de Bois ( 12 French trappers & woodsmen) launched a raid on Colonial American settlers in the Mohawk Valley.

A patrol of Rangers and British Light Infantry (24 figs.) was sent to rescue the beleaguered homesteaders before they were burned out of their homes. The Indians split into two groups, one attacking a homestead at each end of the table. In my attack I used the Coureurs de Bois as sharpshooters, pinning down the settlers with musket fire while the Abenakis swarmed in.

It worked, and within two turns three settlers were killed and scalped, and three more were holed up in a log cabin, firing out the windows at the Indians and trappers milling around outside. they managed to old out until almost the end of the game, by which time the cabin was on fire. Eventually two Coureurs de Bois managed to kick the door in, and slaughtered the surviving defenders, just before the cabin collapsed in flames.

On the other side of the table the attack didn’t go quite so well, mainly because the those settler womenfolk were tough cookies. One managed to kill four Indians, while another led a charmed life, holding her own on top of a wagon until the Rangers arrived to rescue her. The rangers arrived in the nick of time, and managed to demolish the Abenaki through their superior firepower, and more than a few lucky melee dice rolls.

The British light infantry tried to do the same at the other side of the table, but ran into about a group of Abenaki deployed in a skirmish line, who pinned the British down. That allowed a small unit of Coureurs de Bois to join the fray, while yet more Indians joined in from the perimeter of the homestead, at the far side of a clearing. After three turns of this uneven fight one Indian was dead, and four British regulars. Quite sensibly the British withdrew, just as the homestead finally succumbed to the flames.

It was almost as if two games were being fought on different sides of the table, one ending in a British victory and the other in a French / Indian one. The rules we used were War in the Forest, the French & Indian War variant to his skirmish set called A Good Day to Die. Certainly they had their quirks, and didn’t cover things like breaking into buildings or setting fire to them. However, that’s what you expect from Chris Peers’ rules – you’ll have fun, but inevitably you’ll find yourself writing amendments and house rules for them! The consensus was that while we’ll probably try the rules again, we’ll also try writing a French & Indian Wars version of Chris Peers’ In the Heart of Africa set. After all, we use them for Colonial games, so surely they won’t need much tweaking for this period.

Tags: A Good Day to Die