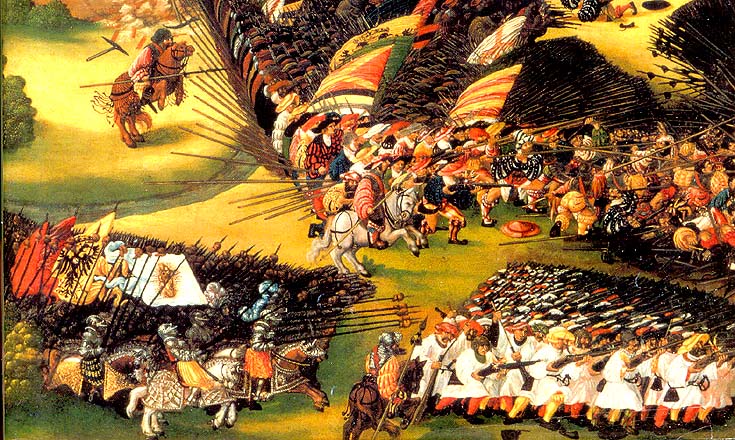 I really love this period. One of the first Osprey books I ever wrote was Pavia 1525. I studied Italian Renaissance history at university, and my Masters dissertation was about Renaissance artillery -albeit guns used at sea. However, my actual foray into the wargaming of the Italian Wars was recent. Like so many projects, it came about due to a club project., “German Michael” is a big fan of the period, and has an army of landsknechts. I once started painting up a landskencht pike block, but ran out of steam after six figures. I revisited them every year, and so when I finally managed to field a block of 36 pikemen, it was a unit that had taken me six years to complete! Still, it was a start, and now I have a small but steadily growing army.

When it came to sides I opted for La Serenissima – the Serene Republic of Venice. I’m fond of Venice – its one of my favourite cities – and I already had Venetian galleys. So, it seemed logical to build up their land forces too. The pikemen became Tyrolian mercenaries in the service of the Republic – they had several thousand of their books – and they were soon joined by other units – blocks of militia crossbowmen with rather obsolete pavises, units of mounted crossbowmen and Balkan stradiots, screens of skirmishing handgunners, pikemen from the Romagna, elite condottiere of the lanze spezzate, and of course artillery – a must given my love of Renaissance guns, and admiration for the great Venetian founder Sigismondo Alberghetti. Others have jumped on the bandwagon – we now have French, Spanish and Florentine troops to augment the large Imperial army, and my small but growing Venetian one.

For rules we use Pike & Shotte, augmented by some house rules developed by “German Michael”, who remains the driving force being this club project. In fact, it can be argued that our delving into The Italian War has been too successful, as we now probably have more troops between us than we can sensibly field for a club night game. Still , the games are a real delight – they’re colourful, dashing and great fun. Most importantly, they capture a little of the aesthetic charm of this period, with its brightly clothed Swiss and Landsknechts, it brightly-caparisoned French gendarmes and Italian condottiere, and the gaily-painted banners and pennons fluttering everywhere on the tabletop. In other words – these games are wargames – but they’re also probably the most beautiful ones around.