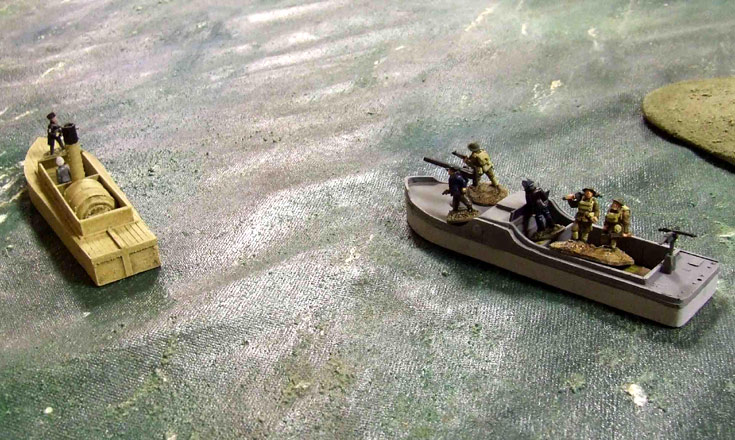 I’ve already said that games organised by Colin Jack tend to be a bit silly. This one was as daft as they get! For a start, it was part of his alternative “1938: Tthe Third English Civil War campaign”. That means everything was completely fictitious, and slightly unbelievable. Then there was the scenario itself. This was no finely-crafted Charles S. Grant affair. Oh no. Our game involved an 8×6 foot sea mat, two bare islands, and a lighthouse.

The rather loose premise was that these were the Farne Islands, off the North Sea coast of north-eastern England. Inner Farne boasted a lighthouse, while there was nothing on Outer Farne apart from a radio tower and an awful lot of puffins.  The newly-built radio tower was held by the British Union of Facists (BUF), who used it to broadcast their brutish propaganda to the mainland. The Inner Farne lighthouse was held by a small anti-Facist garrison, which included a howitzer and crew – the start of a makeshift coastal battery. These troops came from the Anglican League. Don’t ask. For some reason, both sides simultaneously decided to send reinforcements from the mainland, and to launch an attack on the enemy-held island. I told you it was silly!

The BUF landed near the Inner Farne lighthouse, the landing supported by a strange-looking armed tug. They then spent the whole game overpowering a small bunker, and by the end of the evening the battery position and its command bunker were still in Anglican hands. Meanwhile, on Outer Farne the Anglican League approached in two boats – a landing craft and an armed motor launch. The launch began shooting up a lightly armed BUF launch it found off Outer Farne, and the landing went ahead unopposed. Unfortunately the Facists had  an armoured car on the island, which (rather gamily) hid on the reverse slope from the well-armed motor launch, and kept the Anglican assault troops at bay.

When the game ended the Anglicans had wiped out the island garrison, but still had to overpower the armoured car. The launch had been sent back to the mainland to pick up reinforcements (a small tank), but the Facists were also sending two boatloads of reinforcements to reclaim the island. The game was finally declared a draw, but in truth the outcome was still very much in doubt, despite the Facist superiority in “cool toys”

To add to the silliness, special events and reinforcements were diced for at the end of every turn. Something turned up about every second turn, and strangely enough, all of the “cool toys” appeared on the Facist side. The first  was a Nazi corvette, with a bizarre howitzer on the back. Then came a well-armed boatload of reinforcements, followed by air support in the shape of a turncoat Gloster Gladiator. Finally a Nazi U-Boat surfaced between the two islands, which used its anti-aircraft gun to pepper the defences of Inner Farne. Of course, this was no more farcical than the scenario itself, the line-up of forces and the bizzarre two-island tabletop! All utter nonsense – but shame-faced fun.

For rules we used Warhammer’s The Great War. If you like Warhammer rules they worked fine, bolstered by Colin’s own bolt-on nautical bits . 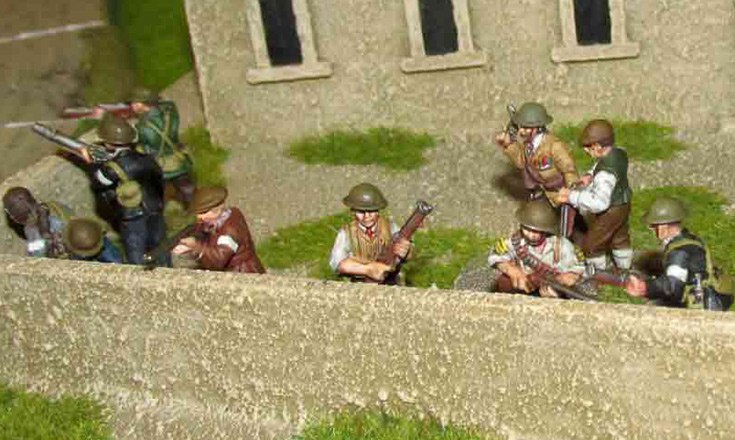