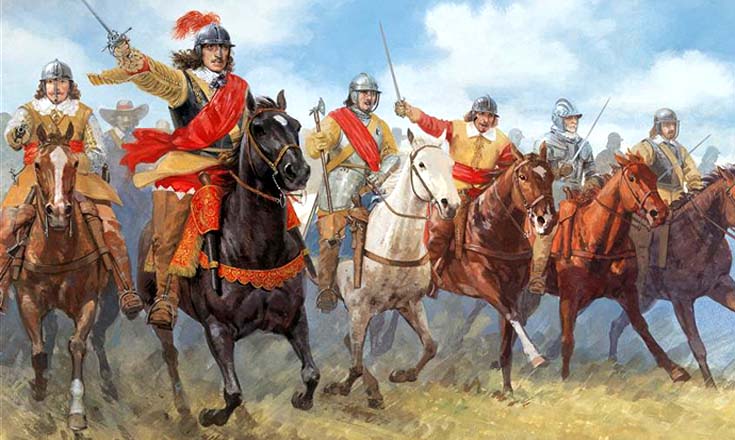 Neither English, nor Civil…

This has long been one of my favourite periods, and so the “War without an Enemy” has been one of my gaming standards for many years. The relatively small size of English Civil War battles makes it ideal for 25mm figures, so a few years ago I sold off my 15mm figures and “re-tooled” for 28mm.

The big attraction of this period is the colour and spectacle of it all – mixed units of pike and shot, the dashing units of cavalry, the flags, the drums … you get the picture! These were also the days when religion and politics were completely intertwined, and some of the basic tenets of democracy were being forged in the crucible of civil war. As for sides, I’m undoubtedly a “right but repulsive” Parliamentarian rather than a “wrong but womantic” Royalist.. although my true allegiance is with the Scottish Covenanters. My current army is based on the Earl of Manchester’s Eastern Association – mainly because I can have Oliver Cromwell (a historical hero of mine) as my cavalry commander.

For rules we opted for Very Civile Actions, produced for free by “The Perfect Captain”. These are great fun, but at least in theory battles are fought out at a fairly low level, where a “company” of around 16 figures (four stands) represents about 200 men – or roughly a third of a regiment. This works pretty well when you want to field 40-man regiments, with three separate “companies” of pike or shot. Cavalry run around in 8-12 man units.

If you prefer “army” level rules, then I’ve long been a supporter of Pete Berry’s Forlorn Hope, a set produced by Partizan Press (or Caliver Books). I know Pete has strayed into 6mm in his old age, but his original ECW system is hard to beat. I’ve tried Warhammer ECW – believe me, I gave it my best shot. I just couldn’t get my head around having to roll 60 dice when a unit fired its muskets, then 40 to wound, and about another 20 to penetrate armour. That’s about 120 dice – Forlorn Hope achieve the same effect with two D6s! Then there’s the “anteater-tongue” grapeshot rules which could wipe out half a unit on the far side of the table! Don’t get me started on the crazy morale system…! While Warhammer might work reasonably well as an Ancients set if you don’t take it too seriously, in my humble opinion the ECW rules suck big time! However, there are plenty of alternatives out there, including 1644, and Warfare in the Age of Discovery. I won’t even mention DBR, as I want to play something akin to a historical game rather than a semi-historical engagement limited by the mechanics of a clunky rules system!

Very Civile Actions (VCA) uses a system which was originally (and rather clumsily) called Spanish Fury – Actions, which was designed for the late 16th century. The “Actions” part is just one element in a greater “Spanish Fury” system for the late 16th century, which includes “Battle”, “Siege”, “Sail” and “Campaign” elements. The VCA rules are essentially a 17th century variant of the original set, and they work a treat, especially if you enjoy games where the emphasis is on enjoying yourself rather than wanting to refight Naseby, or gaming the system rather than the period.

If you want big battles, then opt for Forlorn Hope, which has a 33:1 figure ratio – by contrast VCA is pretty low level, with a scale of around 12:1. Well, damn it, I like having 48 man regiments in this period, and that’s not counting extra officer, drummer and ensign figures!

Here’s another one – Dave Imrie’s Covenanters, with a 16 man pike block, and two “sleeves” of 12 muskets apiece. the little leather gun is added for interest, but the regimental command stand plays a part in the actual rules, although officers don’t actually count in combat. I’ve got to say, Dave paints extremely well…

The icing on the cake is Tinker Fox, an ECW campaign produced by The Perfect Captain, and set somewhere in the Midlands. Players fight for control of their county. All in all The Perfect Captain have produced a superb package for wargamers, and one which has led to something of a revival in interest in the period in the Edinburgh club over the past few years.

Incidentally, these VCA cards are designed for 15mm figures. What we do for 25’s is to increase the movement distances by around half, but keep the already generous firing ranges as they are. For example, “formed” pike now move 4″ a turn, shot move 6″, and formed cavalry 9″. If you have the right version of Adobe you can tweak the cards before printing ’em out.

I’ve often used the throwaway Scottish line that the good thing about the English Civil War was that it involved Englishmen killing each other. Of course this isn’t strictly true, as the Scots, the Welsh and the Irish all got in on the act. I was going to build up a Covenanting army, but others have pipped me to the post – club members Dave Imrie and Jack Glanville have both raised Covenanting forces. I’m afraid I can’t bring myself to raise the Scots Royalist army of “that devil” Montrose. This means my my allegiance remains solidly with Parliament.

Recently, Warlord Games have come out with Pike & Shotte, and after a good English Civil War game using the rules I can honestly say that they produce a very good game. they’re a little more complex than Very Civile Actions, but they’re designed for a different kind of battle – a full-scale affair, rather than a large skirmish. The good thing is that nothing has to be rebased – we can use the same bases for either set, which gives us a palette of rules to use as the scenario demands. The other advantage of P&S is that it’ll also work for The War of the Grand Alliance, and also for the Italian Wars, which is a period I may get off the ground one of these days.

My review of Very Civile Actions Published in Battlegames (Issue 3)