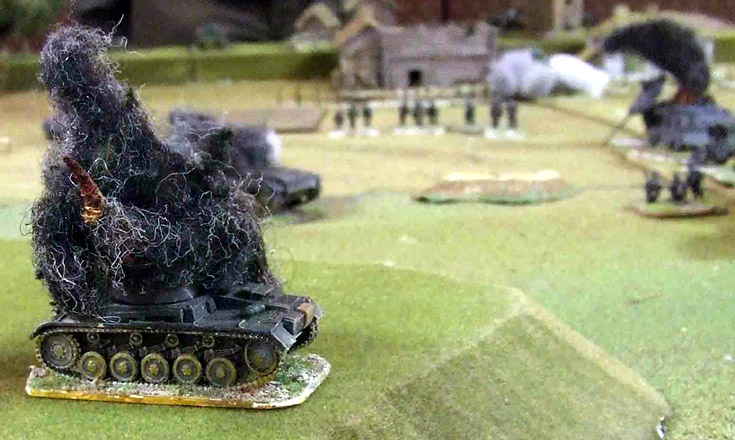 This hard-fought little battle involved a German combined-arms attack against a hastily-formed Soviet defensive position, and was set somewhere near Millerovo, in the bend of the River Don, during the German advance on Stalingrad. the Russians had two defensive layers – a lightly held outer band consisting of infantry and concealed anti-tank guns, and a second, better fortified line, with dug-in infantry, wire, trenches and tank support.

The Germans attacked along the axis of the main road, and had little difficulty either bypassing or overrunning the first line of defence. Russian anti-tank guns hidden in a cornfield only scored one kill before being overwhelmed,  and the GErman armoured rolled on towards the village. That was when things started to go wrong for them.

Soviet artillery caused casualties amongst the infantry, forcing them to disembark from their trucks a fair distance from the village. then, another battery of hidden anti-tank guns knocked out more German AFV’s, although they too were eventually overrun by the attackers. By then though, the Soviet armoured reserves had arrived.

While the lighter BT-7’s weren’t too successful, the T-34’s proved more than a match for the German tanks, particularly as most of the new long-barrelled Pz. IV’s had already been brewed up. The German air support never arrived to clear the road, and as German tank losses mounted their assault ground to a halt. Finally they were reduced to laying smoke, to cover their remaining tanks from the Soviet armour.

Without aggressive support from the panzers, the German infantry never managed to press home its attack against the village. As the game drew to a close Dougie, playing the German commander was about to give the order to pull back, to try again another day. No doubt he’d also have a sharp word with his Luftwaffe liaison officer!

Like all our 20mm Second World War games, this was played out using the excellent Battlegroup Panzer Grenadier rules. Caliver Books have just published a new 2nd edition, but we haven’t got copies yet, so this game used the original rules. to be honest, we’re all a little wary of the new version – mainly as we all believe in the principle that if it ain’t broke, you don’t try to fix it! Still, we’re all keen to see what the changes will be…