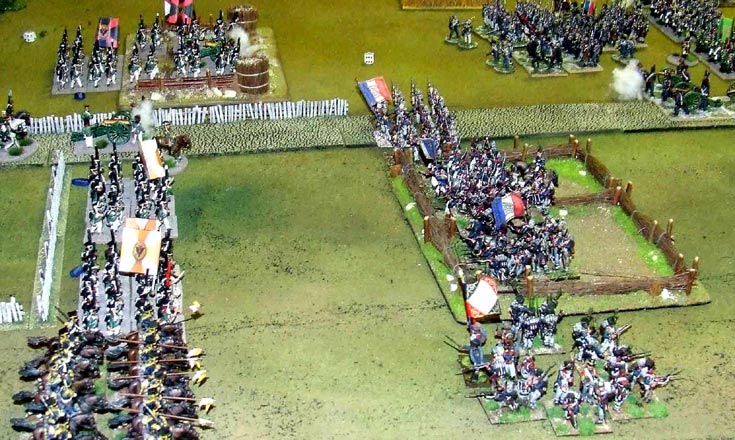 The real Battle of Vyazma was a hard-fought affair, where the Russians tried to block the advance of the Grand Armee’s rearguard during the retreat from Moscow in 1812. This multi-player Black Powder game was an equally well-contested battle, but it was only loosely based on the real engagement. It was fought on the day before the snows came, and defeat for the French would mean the virtual annihilation of Davout’s I Corps, and the fighting heart of the dwindling army. For the Russians, in the real battle Kutuzov didn’t reinforce the blocking force, as he was happy to let the Russian winter do the work for him. Consequently Davout broke through to rejoin the main army, with a little help from some of his colleagues – Poniatowski, Prince Eugene and Ney. In our little game there was a good chance that Russian reinforcements would appear on the southern table edge as the battle progressed. Time was therefore on the Russians’ side, and the French had to punch through quickly to guarantee victory.

In this game Iain Gale, Dougie Trail and Dave Marks  commanded the French invaders, while “Shug” Wilson, Colin Jack, Bart “the Pole” and I led the defenders of Mother Russia. Bill Gilchrist concocted the Black Powder scenario, and umpired the game. You can read his full orbat and briefing notes on his blog. The fact that Bill’s wife is Russian naturally had nothing to do with the outcome…  The figures came from the collections of Bill, Dougie, Iain and myself. A special mention goes to Iain’s French command group, complete with attendant cantiniere/mistress figure  – all very colourful.

True to form, the French launched a furious attack from the first turn onwards, and as fresh brigades entered the table they too were hurled against the outnumbered but resolute Russian line. Over on the French right flank the French cavalry edged forward, led by a brigade of cuirassiers. They were charged by their Russian counterparts of the Empress Cuirassier regiment with mixed success – they routed one of the French units, but were bounced back by the other.  The remaining French cuirassier regiment was shaken, disordered and seemingly ripe for plucking. Rather rashly the Russian Cossack commander launched three successive charges at them, and not surprisingly all of them were bounced. Then it was the turn of the other half of the Russian Empress cuirassiers. They too were repulsed, leaving that side of the table covered with cavalry units licking their wounds.

Back in the centre the leading French brigade reached the Russian line, where it was met by musketry and canister. We’d downgraded the Russians when it came to shooting, so rather sensibly the Russian commander decided to go in with the bayonet. Thanks to some rather impressive die rolling two of the leading French battalions broke and ran, while their colleagues resorted to shooting at long range, while they waited for the rest of the Corps to renew the attack. One of the French battalions even went into square, as it was faced by the Marioupol Hussars. What saved them is that for the next two turns I forgot to fire my attached horse artillery battery, which gave the French something of a breather.

To the north of the Vyazma Road was a small redoubt, defended by heavy artillery, hiding what can only be described as oversized fantasy gabions.  Still, they did the trick. One attacking French battalion was broken by canister fire, while the others failed to charge in, as their commander rolled badly at a crucial moment. Still, he’d brought up his artillery, who commenced a counter-battery fire. The plan was to soften up the defences before launching another assault. Still, the great French attack was starting to grind to a halt, and remember – time wasn’t on the French side.

Back on the French right (or the Russian left) – the northern table edge – the Russians had finally got rid of the doughty and bloodied 11th Cuirassiers, thanks to another rash but bizarrely successful Cossack charge into their front and flank. With the cuirassier bulwark gone the French had to use what remained of their cavalry to screen the infantry and artillery in their centre-right, and the fighting there fizzled out as the Cossacks worked their way around behind the French flank, and the French horsemen extended their screen. In effect the two cavalry bodies had cancelled each other out.

The French renewed their assault, but once again the outnumbered Russians held their ground, helped by those heavy guns in the redoubt. Then, the Russian reinforcements appeared. For much of the game the Russian blocking force had been heavily outnumbered, at least in terms of artillery. One Russian brigade faced no fewer than four French infantry brigades. However, the French were constrained by a big clutter of wagons and gun impedimenta, and by poor command dice. As a result they never managed to launch that all-important coordinated assault. The arrival of reinforcements tipped the battle, as now both sides had a rough parity in strength – in fact the Russians might even have had a slight edge in numbers.

In the picture below you can see the Russian reinforcements appearing on the southern table edge – on the unprotected French left flank. The French still had one brigade of infantry left in reserve, and they hurriedly re-deployed to face this new threat, but frankly they were too few of them to stem the tide. By this time the infantry assault on the Russian centre had been repulsed for the second time, and more French units had broken. The real heroes of the day – apart from the French 11th Cuirassiers – were the two Russian battalions of the Astrakhan Grenadiers that defended the line of a fence at the edge of a small area of enclosures, and held their ground against everything the French could throw at them. With time for packing up upon us, it was clear that the French had shot their bolt. While given time they might have been able to launch a third assault, its chances of success were greatly reduced by the appearance of the Russian reinforcements. Davout was therefore forced to pull back, and no doubt on the following day another attempt would be made – if the rest of the Grand Armee could turn around and come to Davout’s aid. Victory then, was duly awarded to the forces of Holy Mother Russia. Urrah!

Like I said at the start, this game was only loosely based on the Battle of Vyazma, which was altogether a more complex affair, with the blocking force being hit on both sides, and Kutuzov keeping most of his army sitting quietly by, waiting for the snows to come and finish off the job with little or no risk to his men. As always, Black Powder produced a fast-paced and enjoyable game. These rules are perfect for a fast game on a club night, where you can put lots of toys on the table and still achieve a result by the end of the evening. However, I’d like to replay this again some time, using the slightly slower but more realistic General de Brigade rules – my rules set of choice for the Napoleonic War.