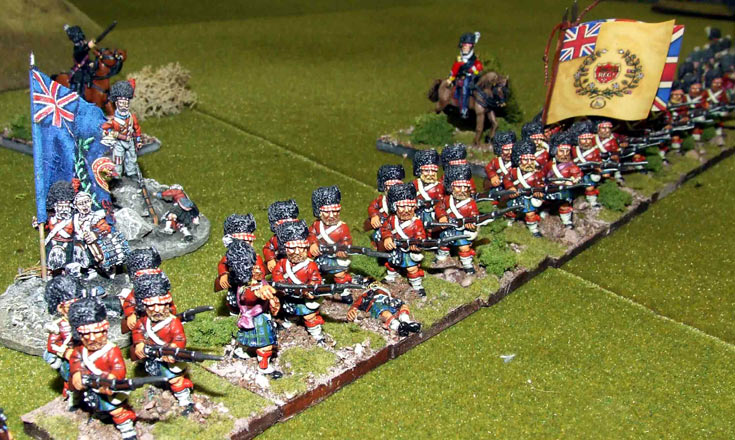 About two or three times a year I take part in a League of Gentleman Wargamers game, a fancy name for what is essentially a group of gamers who get together for a weekend to refight a battle. These games are usually pretty big, and this one was no exception. The unusual thing about it was that instead of a dozen of us all supplying our quota of figures, this time almost all the lead came from one guy’s collection! Bob Lauder had been building his Crimean War collection for more than a decade, and this – believe it or not – was its first proper outing. In this refight of the Battle of the Alma there was around 3,500 figures on the table, which meant the battle was refought at a figure ratio of 1 figure = 30 men.

Apart from a few hundred French figures, the rest all belonged to Bob – a labour of love that took almost 60 file boxes to move around. In fact, Bob has about 20 more boxes at home – figures for other battles of the war. It was a real pleasure for the rest of us – a dozen wargamers – to refight the battle using Bob’s mountain of nicely-painted lead.

I played the part of one of the Russian commanders, whose small force held the far left of the Alma Heights, facing off four times their number of French and Turks. The whole table stretched for about 30 feet, and was divided into two sections (east and west), with cut-outs and a hole in the middle to allow players to reach anywhere they wanted on this vast tabletop. As you all know, in the real battle about 60,000 Allies (British and French in equal numbers, plus about 6,000 Turks) faced around 35,000 Russians, who held the high ground on the far side of the River Alma.

The Allied objective was simple – by Sunday at 3pm (when we had to pack up) they had to be in control of the road leading to Sevastopol, which ran down the centre of the table (pictured above, stretching south from Bourliouk village). The British were deployed to the west of the road, the French to the west, and the Turks on the French right flank, where the River Alma flowed into the Black Sea. Just offshore were a couple of very impressive warships, whose guns covered the heights within a mile of the shore.

We used Republic to Empire,  a Napoleonic set, which have a tendency to be more than a little complex, but fortunately the author was on hand to keep us right. Just as fortuitously, these Napoleonic rules didn’t need much amending for this game as weapons and tactics had barely changed since Waterloo, save for the introduction of rifled muskets. The refight didn’t exactly unfold historically. For instance, it wasn’t until 11am on Sunday – after 11 hours of play – that the British infantry finally waded across the Alma river. By contrast the French reached the top of the Alma Heights, while the Turks not only reached the heights, but traversed them from the coast to the Sevastopol road! So much for British pluck… and the rules. They can be more than a little slow, and bog down even more when the two sides come to grips. The fact that the British took a day and a half of gaming time to cross the Alma and scale the heights underlines the point.

The battle began on Saturday morning with the Allies advancing – or at least the French and Turkish contingents did. A Russian advanced guard occupied Bourliouk village, and under these rules an occupied built-up area creates a sort of force field that effectively held up the British for several turns. In fact the British were repulsed when they launched an all-out assault, which effectively stalled the British advance for the rest of the day. They were helped by an aggressive use of cavalry and horse artillery on the Russian right, which effectively pinned the Light Division on the far side of the river until cavalry could be brought forward to deal with them.

On the British right flank the French and Turkish advance was unopposed, and even though progress was fairly slow, the attackers had reached the top of the Alma Heights by the end of the day’s play. The Russians only had enough troops to hold the westerly side of the eastern table, preventing access to the Sevastopol road. The French took a bit of a pounding from Russian guns, but the Turks didn’t suffer a single casualty, as the Russians didn’t have any troops in range of them. As the players headed for the local pub, it was still all to play for.

On Sunday morning the British cavalry forded the river, and eventually drove back their Russian counterparts. This finally allowed the British to move forward, but the Light Division and the Highland Brigade never seemed to make much headway, and the game ended before they set foot on the lower slopes of the heights. Kourgane Hill, and the Grand Redoubt which played a major part in the real battle remained firmly in Russian hands throughout the weekend. Things were a lot different to the west of the Sevastopol road. My own division was torn apart after a gruelling couple of hours of battle, and the survivors pulled back to the road, covered by the Moscow regiment and the other defenders on Telegraph Hill.

This intense pressure from the French coincided with a major British attack up the Sevastopol road, after the British right flank crossed the Alma south of Bourliouk village, and advanced on the heights beyond. In the end though, the Russian defences held – barely – and in terms of game turns we had reached the point where darkness had fallen. At one stage I had over a dozen melees to calculate in a single turn, as the French piled on the pressure, plus morale checks, firing and goodness knows what else. There’s a lot of tests in these rules. All the while the Turkish player was complaining I was being too slow, as he was keen to get his own troops into the fray before the battle drew to a close! No pressure there then…

Bizarrely, in the penultimate turn a Turkish brigade appeared behind the Russians on the hill above the road, thanks to some to some jiggery-pokery between the Turkish player and the umpire. In the end though, even this suspect move wasn’t enough to secure victory for the Allies, and after what had become an extremely hard-fought and closely contested battle the Russians were declared the winners. As we all packed away Bob’s thousands of figures, we all felt we’d taken part in something rather special – thanks to Bob Lauder we’d been given a wargaming treat to remember for a very long time. Let’s just hope Bob can lay on a similar game soon, and we can try our hand at Balaclava or Inkerman, the remaining big battles of a largely un-gamed war. Thanks, Bob, for giving us all a real treat.