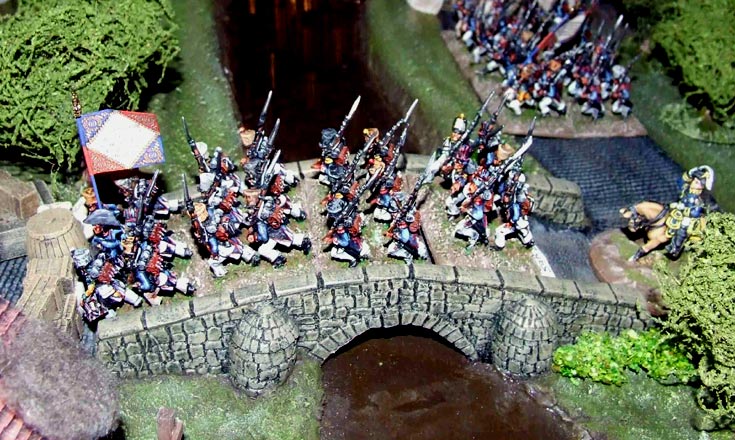 The weekend was spent up in the little Scottish town of Kirriemuir, some 100 miles north of Edinburgh, where “The League of Gentlemen Wargamers” refought the Battle of Ligny. For years I’ve claimed that this period never really interested me, and that Prussians were one of the dullest-looking armies in warfare, but this weekend proved that I was talking nonsense. the battle was a close-fought affair, and the Prussians have a certain dour charm to them which I hadn’t appreciated. They fought a lot better than I’d expected as well.

The battle was fought on two giant tables, each 14 feet x 14 feet, with a pop-up hatch in the middle. the battlefield was dominated by a fish-hook shaped stretch of river, and by the four villages which surrounded the only crossing points. On the western table were the villages of Wagnele, St. Amand la Haye and St. Amand, while the western one was dominated by Ligny itself.The French of course were attacking, and their objective was to capture the line of the Nivelles to Charleroi road, which ran behind the Prussian edge of the table.

Well, it was tough going. The first assaults into Wagnelle by Vandamme’s Corps and into St. Amand by Girard were repulsed, while Ligny proved to be a real meat-grinder. My command – the reserve cavalry of Milhaud and Exelman had nothing to do – which seemed a real waste of 250 cavalry figures!

However, by the end of play on Saturday we’d managed to gain footholds in Ligny and St. Amand, and were well-placed to drive the Prussians out of the rest of the towns into the green fields beyond. Ziethen and Pirch’s Prussian Corps were on the ropes. Well, that’s what we thought…

On Sunday morning we picked up speed a little, and soon cleared the villages of the enemy, and managed to capture Wagnele from the Prussians. However, that was really as far as it got. Despite the arrival of Lobau’s Corps and the Imperial Guard the attacks in the western sector were halted by a strong line of Prussians, backed up by hub-to-hub guns. The same happened in Ligny, where the Prussian reserves just sat and waited, daring the French to attack them.

Our last remaining hope of victory now lay with my cavalry, who had managed to find a crossing point over the small river near its confluence with the Sambre, a little to the east. A mass of French cavalry headed for it, as did the smaller Prussian cavalry reserve, which got there first. As darkness fell the two sides clashed around the ford, with honours being fairly even – units on both sides were chopped up or routed, but the crucial point was that the Prussians were actively contesting the ford, preventing the French cavalry from sweeping round to hit the Prussians from the flank.

The battle fizzled out as darkness fell – or Sunday afternoon drew to a close, and after much debate the long-suffering umpire Adrian Howe declared the Prussians to be the victors. After all, they’d done a lot better than they had historically, and had held their ground until nightfall.