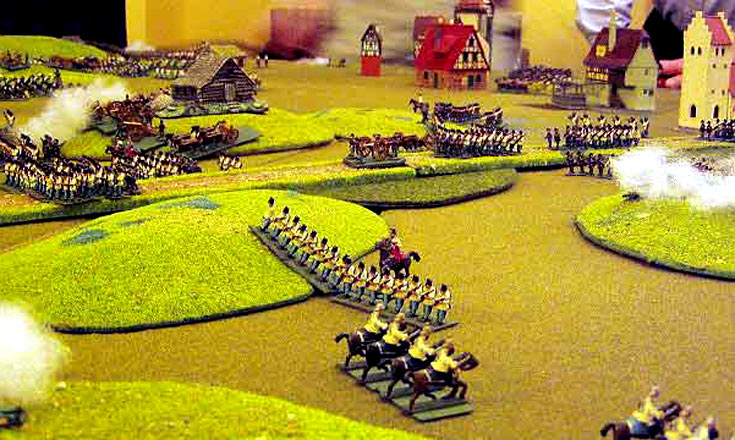 Bismarck’s Wars, On to Richmond, 15mm

It isn’t often that you get the chance to play a game with about 2,500 figures (even if they are 15mm), so when I was asked to take part in a refight of Königgrätz then I jumped at the chance. Wargame buddies Colin Jack and Bill Gilchrist planned to sell their old 1866 figures, but before the lead went onto E-Bay they planned one last hurrah.

They laid it all out in Hugh Wilson’s guesthouse, and it looked pretty splendid – for a 15mm game. Bill adapted the ACW rules set On to Richmond for the occasion. Once commands were allocated – this was a big all-day multi-player game. – then we began. The battle for German supremacy had begun!

I played the role of the Crown Prince of Prussia, commanding the First Army, whose goal was to pin the Austrians in place while two smaller flanking armies – Second Army on the left and the Army of the Elbe on the right – smashed into the Austrian flanks and rear. Well, thats how it worked historically anyway.

Like any refight, things didn’t exactly go according to plan! Poor Dave O’Brian commanding my III Corps on my left spent the first six turns trying to move out – and failing his activation rolls every time.

This meant the attack on the Swiepwald wood went in way behind schedule, exposing the flank of my IV Corps which headed straight for the Austrian centre. Even worse, the Army of the Elbe got into serious difficulty around Nechanitz, so the only attack of any note was taking place against the centre of a rather powerful Austrian line.

Fortunately the Austrian commanders (most of which were charmingly rated “Poltroon” in the game) weren’t too good at activating their Corps either, and then rather obligingly they committed their reserves piecemeal against my centre. Thank goodness for the needle gun, which blew ’em away with Teutonic efficiency. Another highlight was the IV Corps cavalry, which rode through a large gap in the Austrian line and captured the Austrian commander Benetek and his entire staff.

Finally the Prussian Second Army arrived, and although they made slow progress at first, the Guards managed to clear the heights above Chlum, and the game ended with the Austrians calling a general withdrawal. Although the Austrian team performed better than their historical counterparts, the Prussian victory was still pretty convincing. A good time was had by all. As for the rules, the slightly modified  Road to Richmond  set seemed to work fairly well.

Tags: On to Richmond