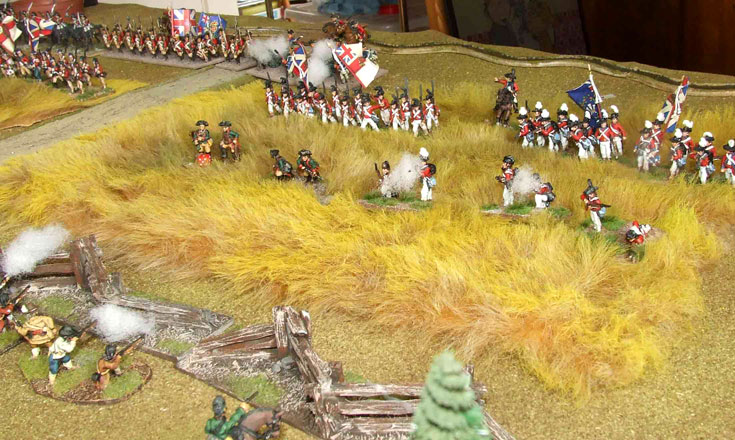 Two wargames in one weekend! This was a refight of Guilford Courthouse – probably my favourite battle from the American War of Independence, and not just ’cause I wrote the Osprey book on it! The war in the South has always held more appeal than the fighting in the Hudson Valley, or around Philadelphia. Part of the appeal – at least from a wargaming perspective – is the fact that the armies were tiny, but the stakes were huge. Well, you all know the basic setup for Guilford. The Americans deployed in three lines, with their worst militia at the front, and the Continental regulars forming the third line.

Cornwallis’ small army had to carve through all three ranks of Americans in order to claim victory. In the real battle he won, but at a terrible cost, and his small army was so badly battered it had to pull back to the coast – and the debacle of Yorktown. The battle always represents a challenge under any rules system, as the British need to have a chance of winning, thereby testing quality and resolve over quantity.

Dougie Trail took on the role of Cornwallis, while I played the bad guys. The first British decision was whether to go in with the bayonet against the first line of North Carolina militia, or to engage in a firefight. Dougie chose the latter, and despite taking a few “permanent” casualties from his light infantry, he managed to see of the rebels in fairly short order. I managed to extricate my 6-pounder section, which pulled back to the thrid line, together with the shameful militia brigadier who survived his brigade morale test, but lost the rest of his brigade! Then the British entered the band of woods, to take on the waiting second line of militia. This time they were Virginians, and slightly better quality.

They were also supported by rifle-armed skirmishers, who soon began to cause casualties on the advancing British. Still, the British advanced and fired, then kept firing until their opponents broke and ran. In British Grenadier firing involves a subtle form of decision making. The first three hits are “free” – they disorder rather than kill. You also pick up disorder markers by advancing through woods, or trying to manoeuvre too quickly. A sensible commander then stands and rallies them off before advancing again. Unfortunately the militia were less able to rally off disorder markers than the British regulars, which meant that they were bound to lose a stand-up fight, or else be forced to pull back when they started taking casualties. To cut a long story short the second line fared a bit better than the first, and this time the riflemen and cavalry pulled back safely, while all but one of the militia units broke and ran.

The British now faced the much sterner prospect of defeating the waiting line of Continental regulars, backed by skirmishers, guns and cavalry. Dougie halted his line at the edge of the woods, dressed his ranks, and gave the order to advance. That was when disaster struck. A lucky “double six” hit from the American guns managed to destroy the small supporting British battery of 3-pounders, and Cornwallis was wounded, and forced out of play for a turn while his wounds were dressed. This proved a crucial moment. The guns then destroyed the British Legion – horse and foot – as they deployed for a charge, and the rest of the British line began to take heavy casualties. Without Cornwallis to help rally off disorder markers the British were now outnumbered, outgunned, and taking casualties far more rapidly than their American opponents. One by one the British (and one Hessian unit) failed their morale check, and retreated from the hail of fire. Other units broke and routed. Let’s just say that the Guards were less than elite that day… It pretty soon became clear that the British had lost the battle, and the American line was no unassailable. Cornwallis had no option but to call off the attack, and call for a general retreat.

This account doesn’t really do justice to a game which was tense, highly enjoyable, and could have gone either way right up to the final turn or two. Guilford is always a tough refight for the British, but although the result wasn’t a historic one, both players agreed that the British Grenadier rules did a great job of simulating this type of morale-driven battle, where training and leadership count more than numbers. The most important thing though, was that I had my revenge after the drubbing of my Russians the day before. It also inspired me to keep painting up my AWI lead stockpile, and to stage another game soon.