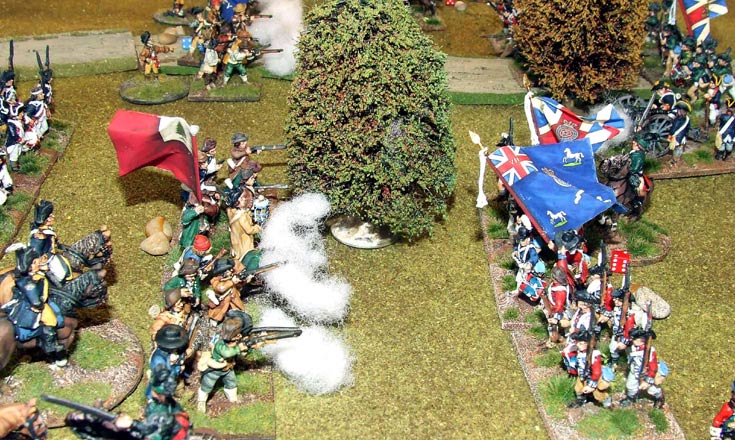 My one chance of a game in the past few weeks came when my pal Chris Henry came up to Orkney to visit. His wife and kid were sent off to play on the beach, while Chris and I got on with the serious business of refighting the Battle of Cowpens. In the original battle, fought in January 1781, a small British “flying column” commanded by Col. Banastre Tarleton came up against a tough little American force led by Gen. Daniel Morgan.

The two sides had about 1,000 and 1,900 on the field respectively. The Americans deployed in three lines -much like they did a few months later at Guilford Courthouse – and Morgan ordered his militia to fire three shots then retire, leaving his Continental regulars to take on the depleted British. The plan worked a treat, helped in no small part by Tarleton’s hasty attack against a well-led and well-deployed larger force. The British were defeated, a humiliating little setback that marked the beginning of the Guilford Courthouse campaign.

We fought out the refight using a figure ratio of about 1 to 15, rather than the usual 1:20 suggested for British Grenadier. The flexibility of the system (an AWI version of General de Brigade) means you can play around with this sort of thing at will, to tailor a game to the number of troops you have available. Well, my British began with an advance up the gentle slope towards the first American line, which was screened by skirmishers – Virginia riflemen.

In British Grenadier you get “disruption points” (DPs) if you roll the wrong dice for movement, or through shooting. Each one means a negative modifier for shooting, melee or morale. Once you clock up three DPs you start taking real casualties. That makes it imperative that you try to keep your DP total low by stopping to dress your ranks, and “rallying off” those pesky DPs. While this made progress frustratingly slow, it was better than a hell-for-leather advance, which would leave the attacker very vulnerable indeed.

The better the troops, the easier and faster it is to rally off DPs. During the advance my lead units began to suffer real casualties before they drove back the American skirmishers, and the first rank of militia. The British paused for breath (and some rallying) before taking on the main American line. This consisted of better-quality troops, including the Maryland-Delaware regiment, which was rated “elite”. By this time the cavalry of both sides had worked themselves into a position for a charge, and the British Legion duly cantered towards the enemy. The British horse were split on either side of the table – on their left a small Legion detachment clashed with American militia horse, while on the right a larger Legion force, took on Col. Washington’s Continental Cavalry, while a supporting charge by a detachment of the 17th Light Dragoons went in against a good quality unit of American militia.

That, of course, is when it all went horribly wrong. The first unit to break was the small dragoon detachment charging the American militia. They never made it into contact, but pulled up and then retreated before the chargers reached the American line. On the British far right the bulk of the British Legion took on Washington’s cavalry, and got the worst of it. They too began retreating for the British table edge, pursued by the American cavalry. So much for the British flank. On the other side – the British left – the smaller unit of British Legion cavalry suffered the ignominity of being routed by the American militia horse. That was the final straw. With both flanks gone the British infantry were left exposed in the centre of the battlefield. While they had been doing well in the firefight, they had no answer to the threat now posed by marauding American cavalry on their flanks.

They were forced to perform a “brigade morale” check. While the Americans had two brigades, plus a CinC, on the British side Tarleton’s force consisted of just one big brigade, which made it less flexible to command, and vulnerable to collapse when casualties started mounting. That collapse is exactly what happened next – the test result was a retreat, and the British immediately pulled back a foot, ceding the field to the Americans. They rallied on the British reserve – a small battalion of the 71st Highlanders – but by then it was clear that the best they could hope for was an orderly withdrawal, harried as they did so by the American cavalry and riflemen. Therefore our refight panned out historically – almost an exact replay of the original battle. While I claimed that I let Chris win, being my house guest, the truth is that like Tarleton, I had gambled everything on the prowess of the British Legion cavalry, and just like in 1781, they came up short.