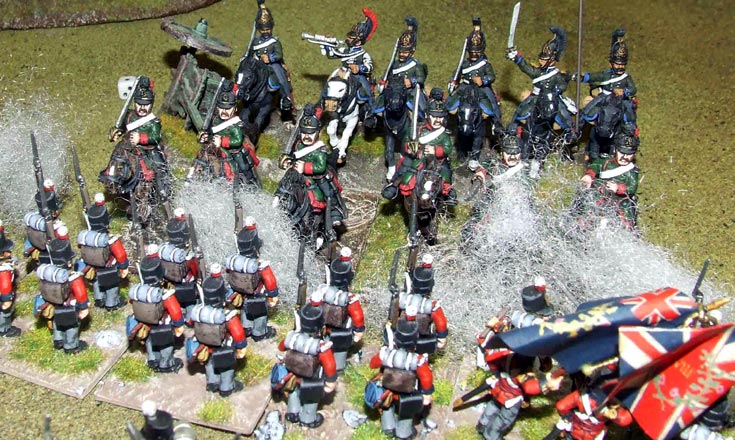 This Sunday we took part in a playtest of the forthcoming Republic to Empire rules. As this was just a playtesting session the armies were highly unusual. One side fielded British, supported by a pair of American guns, while the opposition was an unholy alliance of Frenchmen, Americans, Bavarians an Prussians! After the rules author outlined his numerous rule changes (just about everything), we set to. Both armies opted to launch right hooks, and to defend with their left flanks. The French (well, Bavarian) attack was launched first, and using the new-fangled “exploitation” rules the columns swept across the table – only to be shredded by British musketry and canister fire.

Still, they caused my British a few headaches, temporarily routing one regiment, and charging another veteran British regiment with French cavalry before it could form into square. Fortunately my guys managed to hold on, forcing the cavalry to pull back after a bitterly-contested melee. My routing unit rallied, and by the end of the game what was left of the Bavarians were in full flight.

On the British right the attack was launched against a steady American line, who managed to repel the assault without too much difficulty. Then in the final stages of the game the British launched a brigade-sized attack against the thinly-held French centre, and in the last turn the Buffs (3rd Foot) captured the village which was the lynchpin of the French centre. As a game it was a marginal British victory – although to be honest the game played second fiddle to the playtesting. Barry Hilton, who concocted this rules set, was constantly scribbling notes to himself, as we tested his new ideas to destruction and far beyond!

After all, that’s the whole point of playtesting games – trying out various things to see how the system stands up. On the whole we think the rules worked well enough before, and some of these changes aren’t for the better. In fact they tend to slow the game down quite a bit. Certainly a few parts could probably do with a tweak before publication. However, some nice touches were the order “pip” system, an elegant town fighting system, and a new and fairly intuitive firing system.  On the whole though, simplicity is better than complexity , especially for large games, and the tendency seems to be to err towards adding more stuff, rather than funding ways to streamline. Apparently we’ll get the chance to try the rules out again before they’re finished. By then, of course, they might have radically changed yet again. Let’s hope it’ll be for the better!