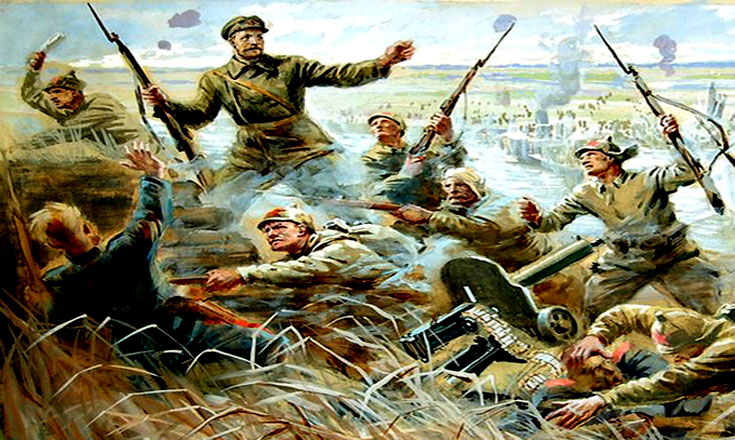 For those of you unfamiliar with the Back of Beyond idea, the name comes from a rules supplement to Chris Peers’ Contemptible Little Armies. Back of Beyond was a set of army lists and a campaign system which allowed players to recreate events which played out in Central Asia during the 1920’s, set against the backdrop of the Russian Civil War. In truth this was a “chicken and egg” period – Chris’ original inspiration was the range of figures brought out by Mark Copplestone. Naturally enough this inspirational range of figures then grew to encompass many of the armies listed in Chris’ Army Lists.

When I first turned up in the Edinburgh Club in late 2002 this was already a popular period with a group of gamers, and over the years it has become a firm favourite. We already had Red and White armies, plus British, Afghans, the followers of Chinese Warlords, Japanese and American intervention forces, Mongolian tribesmen – just about everyone you could think of. Just about the only faction left for the taking were the Turks, who made a brief appearance on the scene in the aftermath of the First World War. Before you could say Enver Pasha I had whistled up an army and was painting my way into the period…

The Red Army (Bolsheviks): Based on the forces on the Turkestan and Eastern Fronts, and including Cheka, Siberian Rifles and Red Guard

“The Army of God”: A force based on a planned invasion of British India by Indian radicals and revolutionaries – Russian regular troops and Muslim fanatics.

The White Russians: Supporters of the (late) Tsar, these anti-Bolshevik troops include elite Officer Corps and Cossack Partisans.

The “Mad Baron”: The army of Baron von Ungern-Sternberg, a larger-than-life White commander – a sort of Apocalypse Now’s Col. Kurtz,

Chinese Bandits: What it says on the box – a rabble which include Red Spear and Big Sword cult members.

Mongolian Tribes: Equestrian armies of tribesmen – who either swamp their opponents or (more usually) get mown down.

The Tibetans: This crowd aren’t peace-loving Hare Krishna supporters – these are stubborn tribal fighters, whose ranks include fighting Lamas!

The Ngoloks: Another tribal victim, these combine aspects of Mongol equestrian and Chinese bandit armies.

The Basmachis: These Afghan tribesmen are doing what they’ve always done – making life hell for anyone who invades their mountain homeland.

The Afghans: The Afghan Regular Army, a little outdated, but a useful foil to British interests in the region.

The British in India: A possible intervention force, and something of a regional super-power.

The Turkish Army: My lot – Although they didn’t intervene in Central Asia outside Georgia, they could have intervened under the leadership of Enver Pasha.

The Japanese Army: A “Blue” interventionist force, stationed in Manchuria, and fighting both the Red Army and Chinese Warlords.

The Dinosaur Hunters: “Indiana Jones” style American palaeontologists stuck in the middle of it all – and hire military muscle to fight their way home.

It all makes an interesting mix, allowing both historical and “what if” games, with a range of troop types, factions and weaponry. There’s scope for aircraft, tanks, armoured cars, trucks and gunboats – all of which have made an appearance, plus there’s lots of room for a bit of characterisation, with different players in the same faction having their own agendas, or allies having very different objectives during a battle.

Of course this is just the official list – you can add other units as you see fit. So far we’ve had games involving almost all of the forces mentioned above, plus American Expeditionary Force, the Czech Legion and even Chinese river pirates! Oh, and in the “Pulp” scheme of things we’ve had appearances by a few fictional characters, including Tin Tin & Snowy!

Many of our games revolve around our campaign, although we also enjoy the odd one-off game as well. If anyone is interested, you can see the latest campaign map down below. One of the good things about this campaign is that it can blow hot and cold – we can play it frequently, or leave it for a month or two, and pick it up where we left off. We can also expand it when we feel like it – we’ve used the same system for games involving German right-wing stormtroopers, the Poles, Chinese pirates and British or French interventionists fighting the Bolsheviks. The only limit is really our imagination.

The campaign also generates occasional newsletters (including the Dai-Li Sun, whose press team are shown above), and a string of occasional all-day or all-weekend multi-player games. If truth be known the result is one of the most enjoyable and light-hearted wargame periods we play.