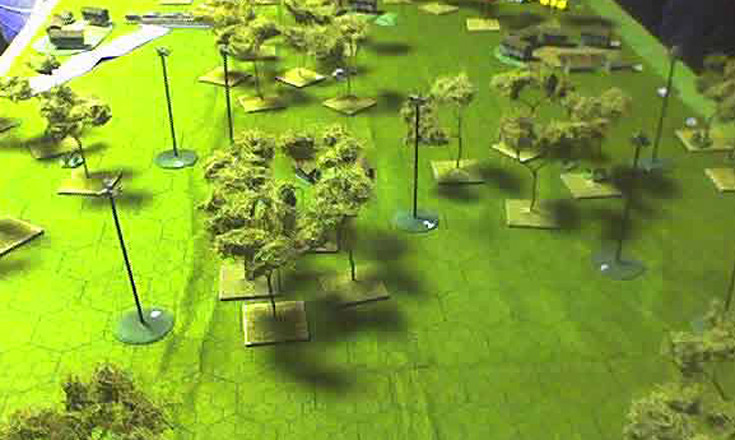 With most of the club doing their last-minute Christmas shopping, Jack Glanville staged a game of Low Level Hell – a 10mm helicopter game set in Vietnam. Everyone one gets a couple of choppers – mostly gunships of various kinds – and the aim is to fly around shooting things up. The umpire – Jack – played the Viet Cong, with Derek acting as his assistant. For some reason that wasn’t fully explained the helicopters couldn’t climb above the jungle canopy. So, they had to fly down what looked like fire breaks in the trees, or along roads or rivers. That gave the particularly well tooled up VC the opportunity to defend themselves by covering these avenues with anti-aircraft guns of various kinds, and from ground fire from troops hidden in the jungle.

It might have been rather silly, but it was all good fun. It was certainly better than going Christmas shopping. I messed up though. I forgot my camera, and the few pictures I took were snapped on my old mobile phone, which wasn’t really up to the task. I also wasn’t any good at using it for anything other than using it as a phone. So, the picture quality is dire – but at least it gives you an impression of what the game looked like.

Each group of players had a mission, which was largely forgotten once the shooting started as panic and self-preservation kicked in. It seemed as if we were choppering into an area crawling with NVA, and we began losing ships all over the place. In the end it became so bad that we had to call in reinforcements. As for me, I was shot down without hitting a thing, although in the last turn my replacement ride – a Cobra – destroyed a couple of trucks, an NVA group, and helped destroy a machine gun bunker.

The only problem with the game is that Jack might have had cool-looking helicopters, but he lacks all but the most basic idea of wargaming aesthetics – so he’s more than happy flying choppers designed for 10mm figures past trees suitable for 25mm figures. Roads and rivers were strips of buttermilk or brown vinyl. We’ll have to have a word with the old chap before he lays on the game again! Still, it was fun, and everyone had a good time. The rules were dreamed up by the South London Warlords as a 1/76 scale demo game for Salute. they were published in Miniature Wargames (I forget when exactly), so in theory they’re out there somewhere.