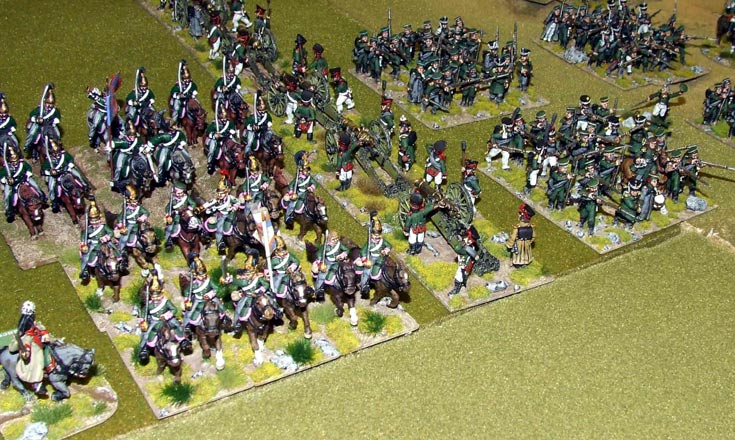 This large weekend game was a bit of a monster, and one of those where both sides had thousands of figures at their disposal, but there were never enough when you needed them! The premise was that Paris was just off one edge of the long table, and the Allies were attacking the last defensive line in front of the city, anchored on the heights of Monmartre at one side, then curving round to the Bois de Vincennes on the other. All the Allies had to do was to fight their way through the French, and claim their prize.

Of course, it was never going to be that easy. The French line was peppered by villages, and in R2E these become mini Stalingrads, their influence extending beyond their walls to the edge of the two foot tile they sat on, where they then exert a 9-inch “force field” beyond it, on every side. Troops entering this force field had to assault the village, leading to a long, bloody and complicated process which eventually ended with one side or other claiming possession. The secret then, was to funnel your troops through the narrow gaps between these zones of control  – easier said than done.

As in any game of this type you land up concentrating on your own little bit. My division of Russians found themselves up against the French in front of the village of Pantin, to the north-east of Paris. As the rules writer, Barry Hilton – the Frenchman – knew exactly what to do, so after a day and a half of gaming my troops landed up where they started, only with half of their original strength.

In my defence half of my troops were “recruits”, and the French weren’t, and my 24 man units were no match for their 36 man French counterparts. Still, it wasn’t one of my finest performances! The only good thing was that his attacks against me led Barry to advance far beyond his defensive position, and eventually Prussian reinforcements swept in behind him to capture Pantin and cut him off from Paris.

On my left Dave O’Brien’s Russians captured the village of St. Girvais after a particularly hard-fought slog, while further to the south Charles Grant’s Austrians wisely bypassed Belleville to chop up the remaining defenders in that sector. From Monmartre Heights to the village La Villette the Russians were held, but the French were unable to stop the Allies pouring past them on either flank – an Austrian (or rather Austrian allied) force had worked its way round the west of Monmartre, to open up yet another road into Paris by the end of the weekend’s play.

In the end the game was deemed a well-deserved and clear-cut Allied victory, but to be truthful the outcome was still in doubt until the last two turns. At one point – when we stopped play on Saturday evening – it looked as if the French would be able to hold the line and save Paris. In the end though, the French capital fell to the Allies, and our Cossacks managed to water their horses in the Seine.

While Republic to Empire (R2E) wouldn’t have been my choice of rules, the game rolled along reasonably well, and it was only the twin delaying factors of the town fighting and a famously pedantic but loveable French player that held up the flow of play. Another feature of R2E are the garish plastic markers that are supposed to accompany the units and commands on the tabletop. It seems a shame to have nice terrain and figures, then spoil the aesthetic with these things.

Still, this was my first full-sized game with the rules, and on the day they proved slightly more workable than I had expected, largely because the rules compiler and his acolytes were there to explain them. No doubt I’ll play R2E again, but my preference for Napoleonic rules still remains the more elegant General de Brigade (Deluxe) set, or the faster and simpler Black Powder for these sorts of large weekend games.