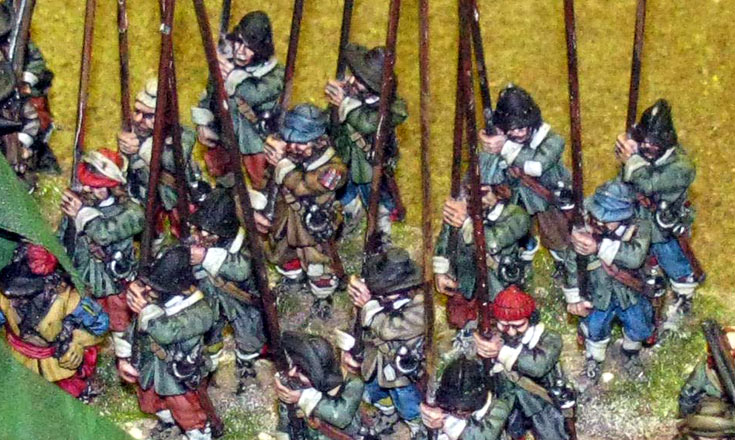 This fictitious little engagement was set in the Second Civil War (1648-49), and saw a small brigade of Parliamentarians defending itself against twice the number of Royalists and their Scots allies. As the defenders were troops of the New Model Army they enjoyed a qualitative advantage over their opponents, and their line was further supported by a small sconce, or earthwork, set in the middle of a large open area.

This sconce became the focal point of the battle, with the allies throwing a whole Scottish brigade against the place, which was defended by a mere handful of musketeers. The question was, would quantity defeat quality, or would we see a demonstration of that old Soviet military adage that quantity has a quality all of its own?

The allies divided up the problem. The Scots foot would take on the sconce, while their Royalist counterparts advanced and defeated the New Model infantry. Meanwhile both cavalry wings would also sweep forward and attack the outnumbered Parliamentarian cavalry. Simple. Of course, while it looked good on paper, it didn’t work quite so well on the tabletop. Most of the allied infantry commanders were “bookish” – they had their nose in the bible rather – and there was a 50-50 chance their units wouldn’t advance on any particular turn, as they dithered and scoured the good book for inspiration.

True to form, these units spent much of their time halted, waiting for their commanders to sort themselves out. This presented the New Model commander with a great opportunity, and he moved his shot forward to harass the Royalist infantry. Their fire did more than irritate – they caused casualties, and forced the oncoming enemy to retire and regroup, before coming on again. The whole attack eventually bogged down as this farce repeated itself. At the end of three hours of play the Royalists were no further forward than they had been at the start, only their units had been badly cut up by musketry.

Over on their flank the Scots threw themselves at Stinky Bottom Sconce, and after a lot of effort, and much halting and redressing of ranks their foot finally managed to charge home, and overrun the heavily outnumbered defenders. That attack though, against a mere 12 musketeer figures had held up the advance of half of the allied army, giving the Parliamentarians the time they needed to repulse the Royalist foot. The Scots cavalry advanced in support of their infantry, and after a fair bit of effort they managed to defeat the New Model cavalry regiment which blocked their way. In this instance at least, quantity had triumphed, but the Parliamentarians still had two horse regiments in reserve – more than enough to stall the Scots if they persevered. The game was finally declared a draw, but despite the loss of the sconce, the New Model army outperformed their lacklustre opponents. Overall then, quality shone through against quantity.