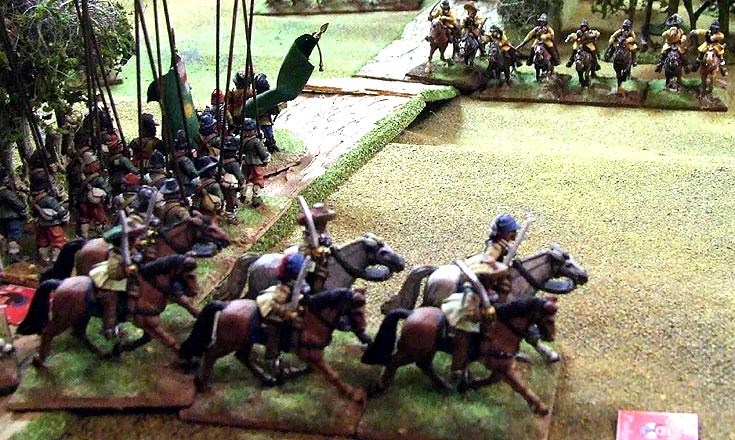 This scenario can be found in Battlegames magazine, Issue 17 (reproduced here with the kind permission of the editor). It was designed by Charles Grant the Younger (i.e. the Subaltern son of CSG), so it was interesting to see if he shared his father’s sadistic streak when it came to devising scenarios. All we did was to set it in the Yorkshire of the English Civil War rather than in the “Napoleonic” Peninsular, and of course we changed a few names – the river became the River Bouze, the vineyard turned into Master Theakston’s hop fields, the village was re-named Oakwell, and the Tavern was turned into the “The Poisoned Dwarf”. This “tabletop teaser” involved the rescue of a Countess, captured by the dastardly French. We made her Lady Fairfax, held prisoner by the evil Royalists.

The idea was that she was allowed out of custody to attend church, while her escort – a squadron of horse and another of dragoons – patrolled the area. Actually, only the dragoons were patrolling (at X) – in true cavalier fashion the Royalist horse headed to the tavern and brothel, despite it obviously being a Sunday. Lord Fairfax, based on the far side of the River Bouze, decided to launch a raid to reclaim his wife. When the Parliamentarians are sighted the Royalist dragoons can alert the cavalry, and either or both squadrons can ride off for help – heading in the directions marked A to D. Once reinforcements arrive, the Royalist objective is to escort Lady Fairfax back into custody,  down road A. Lord Fairfax had to reach the safety of the bridge – with his wife in tow of course. The game was played out on an 8 x 6 foot table.

When the Parliamentarian column appeared the Royalist dragoons headed straight towards road C, without waiting to tell the cavaliers in the Poisoned Dwarf what was happening! They saw the approaching column in the nick of time, saddled up, and fought a spirited defensive action which saw both sides charging and counter-charging in the lane leading to the tavern. This delayed the Parliamentarians, who seemed more concerned with deploying to meet the expected royalist reinforcements, or routing the pesky Cavaliers than rescuing Lady Fairfax!

Eventually though, a unit of Parliamentarian troopers rode up to the church,  collected the General’s lady, and headed back towards safety. By that time though, everything had changed. The Royalists had appeared at C, and while the Royalist dragoons skirted the battlefield to seize the bridge (and block the Parliamentarian line of retreat), the rest of the force launched itself at Fairfax’s line of horse and foot. While the Parliamentarians held their ground pretty well, and their shot were whittling the Royalists down, another crisis was developing on the far side of the table.

Each turn the players rolled for special events  – which kicked in when a double was rolled on 2D6. The Parliamentarians were the first beneficiaries – an extra unit of poor-quality horse. Then the Royalists won the perfect result – the arrival of another column of reinforcements at B, representing men who’d marched to the sound of the guns. This meant the Parliamentarians were caught between two forces. While the unit escorting Lady Fairfax threaded their way through them and headed towards the bridge, the bulk of the Parliamentarian force was already fully committed, and there was little left to counter this new threat.

What followed was a race to the bridge. The Royalist dragoons lost the first part of the race, as a unit of Parliamentarian horse reached the crossing first. However, the rest of the army was strung out along eight feet of tabletop, while the Royalist reinforcements were manoeuvring themselves between them and the bridge. We ran out of time as this rearguard action was playing itself out, but it was clear that while Lord and Lady Fairfax would be re-united, the Parliamentarian general had won a Pyrrhic victory, and as many as half his men would never make it back to safety.

The rules we used were Very Civile Actions, available as a free download from The Perfect Captain. As for Charles Grant’s sadistic streak, the scenario was taxing, but a lot also depended on timing and luck. Without those unexpected Royalist reinforcements the game would have been a walk in the park for the Parliamentarians. In the end however, we landed up with a very tense, and very enjoyable game, with everything to play for right up to the end. It seems that while Charles the Younger mightn’t be quite as fiendish as his brigadier father, when it comes to scenario design he’s certainly a chip off the old block!