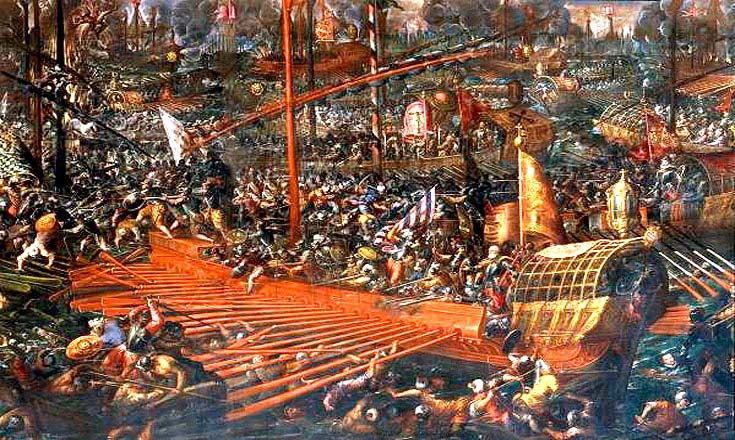 Renaissance Galleys in the Journal

This great new project came about thanks to a surprise delivery. My wargaming buddy Dave Imrie went to Salute 2015, and I met up with him a week later. It seems he met up with a Californian called Thomas Foss at the show – the creative genius behind Skull and Crown. Well, Thomas designs and produces wooden gaming models – things like you’d have found in a nursery a century ago, only produced using the latest technology. He is also a naval enthusiast, and so has produced a few ship models. He handed over a bag of them to Dave, to pass on to me. it seems Thomas had read my Osprey books on Renaissance War Galleys and Lepanto 1571, and rightly thought I’d be interested in his latest project. What Dave delivered was a selection of 1/300 scale plywood-built Renaissance galleys – beautifully designed and manufactured models, and ones that would look terrific assembled and painted. So, to share the joy – and because he’s better at this than I – the ships got passed onto another wargame buddy – Jack Glanville. He’s a first-class modeller, and occasionally a professional figure painter, and I knew he would do these models justice. The result is this – a small fleet of stunning galley models, all ready for action. they’re getting shared out among enthusiastic club members, to encourage them to expand their squadrons.

Thomas has also written a set of rules to go with his ships, called Galleys, Guns and Glory! His love of alliteration aside, these are a perfect set of rules for these models, as they are simple enough to allow multi-player games – and essentially that’s what this is all about – but they also have enough tactical detail in them to make everyone feel like they’re really the captain of a Renaissance war galley, or the commander of a galley squadron. All in all this is a great little project, and one that looks really good on the tabletop.

We’ve only just started playing with these great-looking models in the Edinburgh club, but already it’s generated a lost of interest , and several gamers now want to raise their own squadrons. So far we have the Turks, the Barbary Pirates, the Venetian and the Knights of Malta as contingents, but Spanish, Genoese and Papal squadrons are also planned.

Of course not all galleys are created equal. In GG&G! they come in three main sizes or types – the galiot, the galley and the lanterna. You also get the fusta – which is sort of an oared shuttle bus, and the galleass (which nobody has yet), which is a sort of lumbering death star – half galley, half sailing ship. Here’s how Thomas describes the three main types;

Galley The main fighting vessel in the Mediterranean during the Renaissance. These ships were around 150 feet long, with an average of 24 banks of oars. The galley was a forward facing weapon (the sides were venerable) – behind the great “spur” ram of the ship, Renaissance galleys had a battery of guns in the bow, with one large gun on the centreline, flanked by smaller calibre guns. Over the gun deck was a fighting platform called an arumbada, from which swivel guns, crossbowmen or harquebusiers could fire down into an enemy ship while the boarding party used the spur of the ship as a boarding platform.

Lanterna The lanterna was an oversized variant of the standard galley. Measuring up to 180 feet long, and sporting 2-3 masts, they were slow ships and depending on overall size needed 200+ oarsmen to row. Lanternas were built for war transporting 400 soldiers into battle, and crushing the enemy with a great amount of ordnance in the bow. Named after the lanterns mounted on the sterns used for signalling, the lanterna was most often used as flagships by commanders.

Galiot Galiots were smaller faster more manoeuvrable versions of the galley. Measuring from 80- 90 feet long with 18- 20 oars per side and a single mast, these shallow craft were favoured by corsairs for coastal raiding, as well as using “swarm” tactics on larger ships. Galiots only had one centreline gun, and some swivel guns.

I’ll post more here once we’ve got a few more games under our belt. As these are 1/300 scale models, we can also use 6mm figures instead of markers to represent boarding parties. That’s the next step, but at the moment we’re still getting our sea legs!

You can buy these galley models yourself, and pick up a copy of the rules on Thomas’ Skull & Crown website. If you can’t wait, check out his Skull and Crown blog for more pictures of his games. Thomas also plans to add extra bits, like game aids, more ships, and – if I can somehow talk him into it – a sailing warship or two…

Renaissance Galleys in the Journal