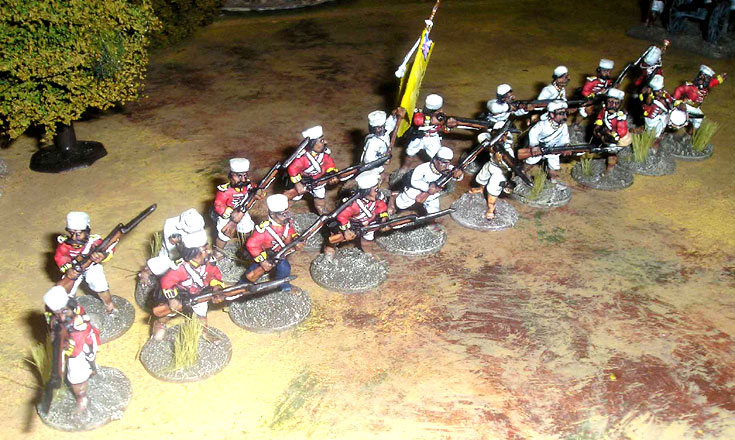 Well, after weeks of painting my Indian Mutineers were finally able to take the field. We set up a large 8′ x 6′ table, with a beleaguered British compound at one end, and a town in the middle. A British relief column had to fight their way through t the compound – which sounded pretty straightforward.

The British managed to get into the town itself, only to meet a mob of Badmash bazaar scum coming the other way. Although the Badmash were shot to pieces, then driven off, they distracted the British long enough for the Ghazi Muslim fanatics to storm in, locking the Guides in combat. The fight continued for the rest of the game, stalling the British advance, and allowing both sides to filter more units into the town.

Over at the compound the siege lines were held by more rabble, which left the Mutineers themselves to concentrate on the relief column. Nikolas, our Polish gamer decided to attack the compound, mainly because he didn’t have much else to do in the game. The defenders caused huge amounts of casualties, but numbers were on the side of the Indians, who drove the British from one of the two strongpoints, and were on the verge of completely overrunning the defence when the game ended.

British firepower was phenomenal – and halfway through the game we dropped the handicap on Indian units having to spend a turn reloading. it just made them useless – and they were already penalised by both morale and shooting ability (the British firing further, and with more effect due to their rifled muskets).

Still, in the end the game was declared a tactical victory for the Mutineers, who not only managed to stall the relief column, but also all but wiped out the defenders of the compound. For rules we used our home-grown variant of Chris Peers’ In the Heart of Africa – a set we rather obviously refer to as In the Heart of India. Essentially the rules are the same, just we’ve changed the troop types a little.