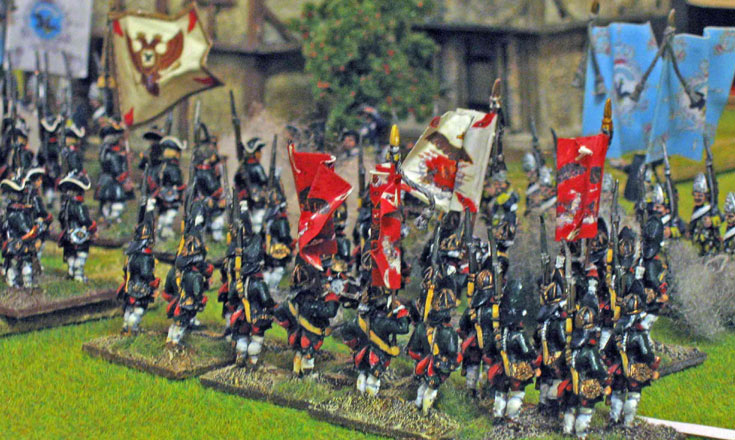 We actually haven’t played a Seven Years War game for more than a year, largely because we’ve been building up our armies. Dougie has the Prussians, and I have the Russians, and we were both waiting until we had a dozen infantry units a side before we took the field again. Well, we reached the target. back then, we used Phil Olley’s homegrown set of rules – A Grim Panoply. However, both Dougie and I have a soft spot for General de Brigade, the Napoleonic rules, and so when their publisher, Dave “Baz” Ryan, asked us to develop a SYW version, we jumped at the chance. this is their first proper playtest by us, although we’ve farmed out playtest games on others as we developed, tweaked and altered.

The Seven Years War is probably my favourite wargame period, although I only have one army – a Russian one. As you can see from the pictures, they still haven’t fully recovered from a varnishing error, which left them with a satiny sheen. My figures are Wargames Foundry (with a few Front Rank mixed in), and apart from the Russian grenadiers, my flags come from GMB Designs. The Prussians are also Foundry, with home-made flags.We decided to run this game more as a vehicle for trying out and adapting the rules, rather than as a straight battle. My opponents for the evening were Dougie Trail’s Prussians. The Huns were outnumbered, but defending a strong position, anchored on a village. The game wasn’t much – just an advance to musket range, followed by a couple of charges – but we did manage to put the rules through their paces.

The main problem is that General de Brigade is geared up for 30-40 figure battalions, while we use 16-man units. That makes it more akin to British Grenadier, so we started using its playsheet, then changing things around a bit to better suit our needs. The Disruption Point system slowed things down – so we dropped it, and we also reverted to the original GdeB movement system rather than the Grenadier one. Then there’s the different tactics to consider, and the need to encourage historic manoeuvres. There’s still a lot of work to do on it, but we now have a working prototype. We’ve even got a rather grand name for it Die Kriegskunst – (The Art of War).