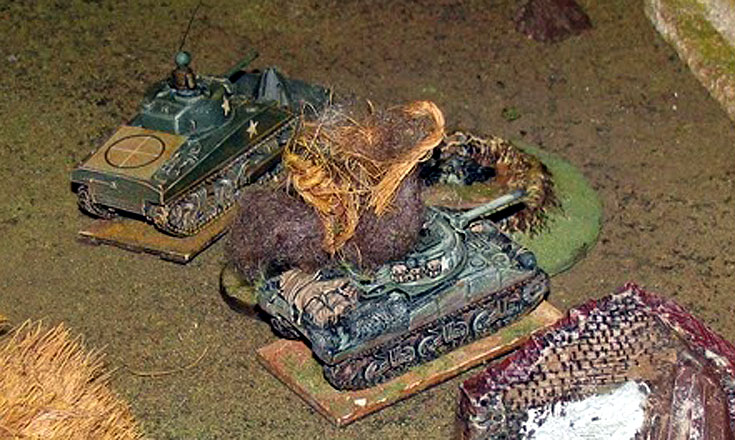 This little game was set amid the initial American attacks on the West Wall around Metz. The US 5th Infantry Division is probing forward towards the German positions to the north-west of Metz, and this game involves a small mixed-arms column of theirs. The German defenders were from the 462nd Infantry Division, who  occupied a blockhouse, surrounded by mines, tank traps and barbed wire.

Team America has two reduced infantry companies at its disposal, backed by armour. Their mission is to probe the German lines, to look for weaknesses. If possible, they should try to knock out the blockhouse – that guarantees a decisive win. The concrete blockhouse was the centrepiece of the German position, and inside it a PAK 40 and an HMG team swept the open ground in front of it. .The defenders had a single reduced infantry company, but one with plenty of its heavy weapons. Could the Americans break this tough nut?

The American players began by pushing an infantry company onto the table in rushes, reaching the woods to their front without taking any casualties. They then settled down to do some observing. There seemed to be a worrying lack of activity to their front, which either meant the Germans were staying hidden, or were somewhere else. The rest of the command then started to come on from the rear of the American advance company. Finally they spotted some German infantry skulking in the buildings on the south edge of the table. A fresh order to the supporting tanks and they began pushing round the edge of the wood  to engaged the Germans. These outnumbered defenders duly fell back through the village to its far end. After gathering for an assault in the southern most wood, the American infantry advanced out of the trees to attack the village. Halfway across they ran into a large minefield. The armour pushed up to the front to look for a gap, but was then ambushed by a hidden panzershrek team. Fortunately for the tankers the Germans missed, and was duly wiped out by the tankers’ machine guns.  However during this exchange one of the tanks became “low on ammo ” – starting what seemed like a trend in the game.

By now the American infantry had found the edge of the minefield, and began pushing round it. As they advanced they pushed round the minefield spotted more German infantry in the village. A heavy firefight began,  heavy fire, but the Germans were heavily outgunned, and once again they pulled back.  The second American company decided to take advantage of this by launching an immediate hasty assault on the village. That’s when they ran into the next minefield – one that extended into the very village itself. Things were starting to look bad, but they soon got even worse. As the attack faltered amid the mines some German mortars opened up, and American casualties began to mount.

Now it was time for the first American company to earn its pay. A fresh attack was launched in an attempt to skirt the edge of the village and get into it from the north. However, a well placed and completely hidden machine gun  opened up, ripping into the advancing troops, and stalling the attack. The tanks were duly called up, and a few rounds finished off the GErman machine gun team. The attack duly resumed, and this time it successfully reached the village. it pushed on, capturing half of it before it ran into any serious opposition. The machine gun in the blockhouse began firing, pinning down the American infantry in the buildings. SO, once again they called up their supporting Shermans.

The tanks fired into the the blockhouse, and were fired at in turn by the PAK 40. Soon, one of the tanks ran out of ammo completely, while another went low on ammo. The German return fire increased in intensity, and soon the PAK 40 knocked out one of the Shermans. It was now clear that the American attack had stalled. Without its tank support the infantry were unable to make any headway, and both the blockhouse and the rest of the village were still firmly in German hands. So, the game ended, in what was effectively a stalemate, albeit one that benefited the defenders. They’d stalled the Americans, and done their job, despite taking casualties.

The inspiration for this game came for a trip to Metz a few years ago. When we were driving down the road north-west of Metz, , heading to one of the many battlefields in the area, when we passed this very blockhouse, one of a small cluster of linked defences sitting in the middle of a farmers field beside the road. it overlooked the road itself, and a nearby village – Saint Hubert. Dougie Trail always wondered what happened there, and why it looked so isolated. Now we know why – it was covering a large area of countryside, and the approaches to the village. In any case, it made an excuse for a good little game.