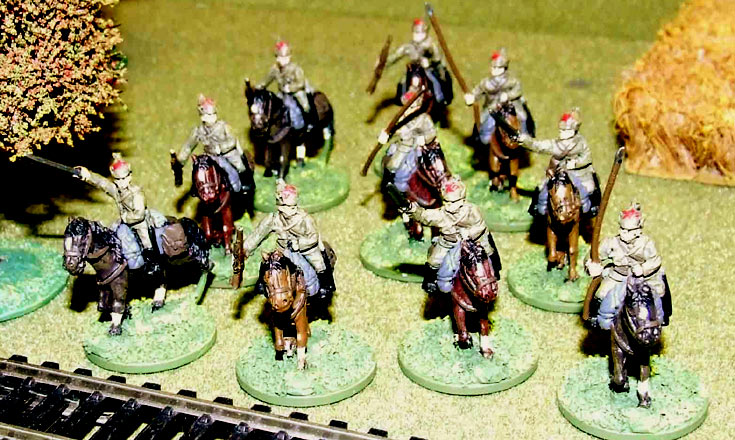 I’m not sure if this should be labelled a Back of Beyond game or a Great War one. Effectively it was a Russian Civil War battle, or rather a Russo-Polish War one, using the rules we use for The Back of Beyond. Of course, it was also set in Belorussia rather than Central Asia. Another thing that was different is that we were using 20mm figures for a change, and the lead was spread over an 8 x 6 foot table.

It was also one with rolling terrain, as the attackers – the Poles – had the task of driving hard towards Minsk, about 32 feet away down four tables – when figures moved off one end of the table everything rolled along a bit.

The Poles (led by Nikolas our Polish wargamer) came unstuck pretty early on. A shootout between two armoured trains saw both Polish and Russian engines damaged, but the “blitzkrieg” up the Minsk road was halted by a doughty Russian company dug into a village. They saw off several waves of attackers, and destroyed most of the Polish Model T Ford transport column in the process. By the time the Poles dealt with the garrison their timetable had become badly unstuck.

Next came an attack on a small hamlet, whose defenders dealt with what remained of the Polish motorised column, and emptied a few cavalry saddles in the process. The defenders were slowly being winkled out, but at every stage the Polish casualties were simply too great for them to absorb. On the far side of the table a lone Red battery dealt with what remained of the Polish armoured train, and the final straw came when the Polish armour bogged down.

The high-water mark of the Polish advance came when their leading cavalry column clashed with Budenny’s Red Cavalry. Although the clash was inconclusive it was clear that the Poles had advanced too far to enjoy any support from their infantry, and were in danger of being chopped up. Consequently Minsk was never seriously threatened, and by the end of the game it was pretty clear that victory lay with the defenders of Mother Russia. All power to the Soviets!

The 20mm figures belonged to Colin Jack and Bill Gilchrist. As with any Chris Peers rules set the game was exceedingly fast, fun, simple and bloody.