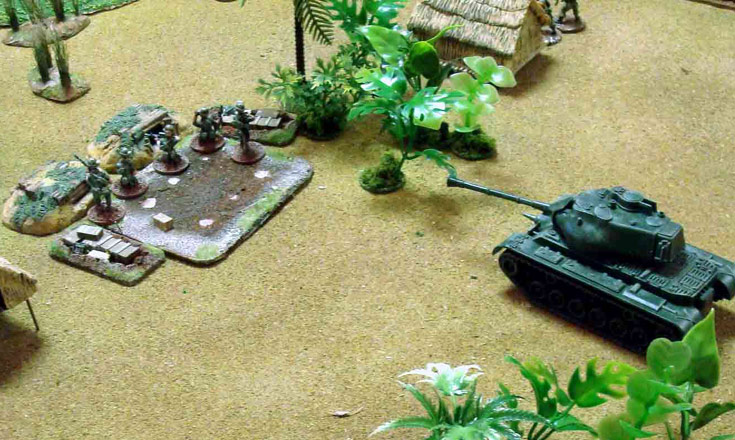 The publication of the new Force on Force modern rules by Osprey has caused quite a stir in the Edinburgh club, and several of the guys are planning to use them to game all sorts of conflicts, from Korea to modern Afghanistan, with the most popular being Rhodesia (encouraged by the fantastic new Eureka figures) and Daxya, a fictitious version of Chechnya. I’ve been reading up about the British campaigns in Malaya and Borneo, and plan to raise a force for them (Eureka Vietnam ANZACS will make do for the Commonwealth troops there). This might even be the start of a brand new period – Lord help us!

Well, to try out the rules it was decided to run a Vietnam game, as people had the figures to hand, and to base the game on a scenario in the rule book. North Vietnamese regulars launched an attack on an American firebase, and the game began with the attackers inside the perimeter. Unfortunately, the scenario called for the game to be played out on a 2 foot x 2 foot table with 15 or 20mm figures. The fellas used a 4 foot x 4 foot table, but forgot to double the movement distances and ranges. This made the game more than a little skewed. Also, instead of an artillery base, as the American players didn’t have artillery models they used whatever they had to hand – tanks and personnel carriers. It therefore looked a little strange. the confusion only increased when buildings and paddy fields were used as bunkers, as the guys laying out the table couldn’t find enough earthworks. the result was something of a farce, and therefore a rather unfair first testing of the rules. When you first try out a set of rules you need to think small – say with a squad or so on each side. Did the guys do this? Oh no! They went full-bore, and ran a game with three players a side, plus artillery, helicopter gunships and fortifications!

This is Bill Gilchrist’s account of the battle; This weeks game at the SESWC was a 28mm play test of the Force On Force (FOF) modern warfare rules by Ambush Alley Games, and published by Osprey. The game was a variant of the Vietnam War scenario ‘Of the Birds and the Bees’ from the rulebook. We used the same forces as per the scenario – six US fire teams defending a firebase being attacked by initially five NVA fire teams who receive reinforcements each turn. The scenario as set out in FOF is to be played on a 2ft by 2ft table – we expanded that to 4ft by 4ft with eventually disastrous results for the NVA. We needed a bigger table as we had six members playing the game, plus another three armchair generals watching and “helping” make sense of the rules.

The game opens with the NVA automatically having the initiative for the first thre turns, with their objective being to overrun the base and eliminate all the US troops. The NVA quickly knocked out one US fire team and also ransacked the unoccupied US HQ but were held in check by a long continuing firefight with two of the other US fire teams. On Turn 4 the NVA still held the initiative but the US players where then able to employ the 155mm guns in the firebase firing beehive shells – i.e. canister -directly at the NVA troops. This proved devastating as they hit five of the NVA fire teams,  effectively eliminating three of them. The game ended rather suddenly at that point – so the US players weren’t able to deploy their gunship helicopter due to them on Turn 5!

The first move of the game took over an hour to play as we all tried to understand the rules in particular the key action – reaction mechanism of the rules, but the subsequent three moves were played in about twenty minutes apiece. The game and the rules were enough of a success that I’m sure we’ll be trying the rules again…