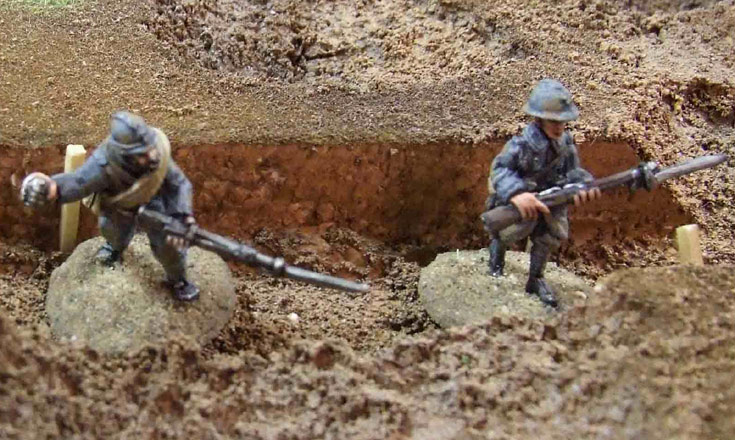 The Great War, Through the Mud and the Blood, 28mm

This week we decided to try out a new set of rules – Through the Mud and the Blood, produced by the Too Fat Lardies. They’re described as a large skirmish set, and are similar to the well received Sharp Practice rules, which we also want to try. Most of us have experimented with Lardy rules before, having tried the Second World War set I Ain’t been Shot Mum (IABSM). Like IABSM these are card driven – you have a pack containing cards for each of the “Big Men” who command troops, plus ones for support weapons and special events. As this was a learning game we simplified things a bit by using our own simpler artillery rules. I have to say, the Lardy ones are much better – probably the best available rules covering First World War artillery. However, we kept it simple.

The cards are turned one at a time, and that “Big Man” performs his actions – motivating troops (who then move and/or fire), removing Shock Markers (we used pebbles) and other inspirational things. The turn ends when the “Snifter” card appears. At that point all remaining units can shoot, but can’t move. Well, in the first three turns the damned “Snifter” card turned up in the first few cards, which meant there was very little movement going on – just a lot of firing. At that point one of the French players lost interest and wandered off, to talk lead-speak with his buddies. Faced with other mutterings I decided to make the “Blank Card” which served no other purpose a second “Snifter” card, and the game would only end when the second card was played.

The game picked up speed after that, but the system was still frustrating, as units would advance into the open, then stand there for what seemed an eternity while everyone fired at them. The game involved six German squad-sized units plus a few support weapons, attacking two French units plus machine guns, with more French coming on as reinforcements. The premise was that the Germans had captured a front line trench during the night, and this was the dawn assault on the French reserve line.

In the end the Germans managed to reach the French positions, but only by advancing up the two communication trenches. Anyone out in the open suffered badly (as you’d expect), including the French reinforcements, who ran into artillery and machine gun fire as they came up in support of their comrades. After three hours of play the game was declared a draw, albeit one which favoured the Germans. While they hadn’t completely cleared the reserve trench, they’d established a strong lodgement, and the French lacked the strength to eject them.

That’s when the real fun started. It seems that you either love Lardy rules or you hate them. For my part I quite liked them – or at least I liked some bits. The “Snifter” card was annoying, as was the general lack of flow in the game. Conversely I can see merit in the card system, and frankly it would become slicker with practice. Other players really didn’t like them at all, and while some agreed to give them another go “some time”, others point-blank refused.

The truth is, we like fairly simple rules for this period, which is why Contemptible Little Armies works for us. Through the Mud and the Blood is interesting, but – like peaty whisky – its also an acquired taste. I quite liked aspects of them, and it played well, but it has its problems. We’ll try them again, but we might need to tinker with the deck a little.

Tags: Through the Mud and the Blood