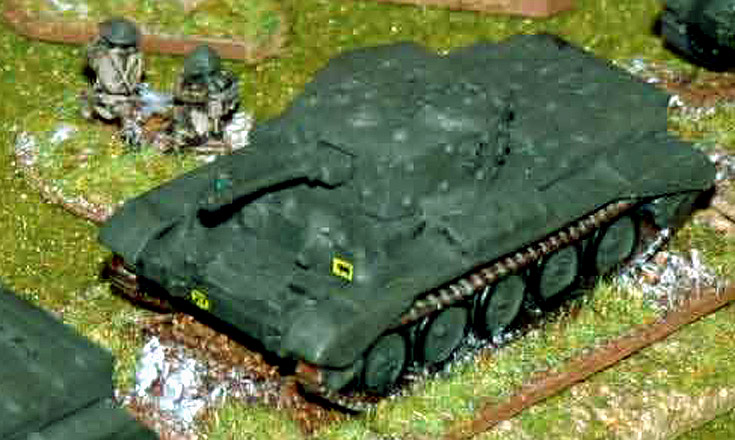 I’ve been talked  into playing quite a few 15mm games lately. While I usually try to avoid the scale, its still very popular in the Edinburgh Club, and sometimes you just have to go with the flow. This one was based on Operation Bluecoat – the British punch in Normandy south of Caumont in late July and early August 1944. The game focused on the crossing of the River Souleuvre, and the fighting around Hill 205 and the hamlet of Le Beny Bocage. For once I was playing the Nazis – a task I also try to avoid whenever I can.

Well, the British 7th Armoured led the attack, spearheaded by the 8th (King’s Royal Irish) Hussars  and the 1st Battalion of the rifle Brigade in their half tracks. To our war-weary German eyes the British had more tanks and artillery missions than common sense demanded. I think for Jack and I as the German players, our only real aim was to hang on until the end of the evening, which we did (more or less), more thanks to Allied caution than anything else.

Jim and Derek advanced very slowly, scouting everything, and taking most of the evening to get across the river in force, and to advance as far as Le Beny Bocage. The only real bit of fighting was around the hamlet, where our panzer grenadiers were holding, and most of it involved an artillery barrage, and a long range tank fire. The British seemed very reluctant to actually enter the place while there was the possibility of a German in it! So, a narrow German defensive victory thanks to the clock, although we lost most of our outnumbered forces. In fact it was a real grinding slog of a battle – most of our casualties came from artillery “stonks” – a seemingly never-ending rolling barrage that walked over the hamlet and then back again. Still, the game looked pretty in its dinky 15mm kind of way, and it was good to see the Germans get a bit of a kicking… even though I was one of them!