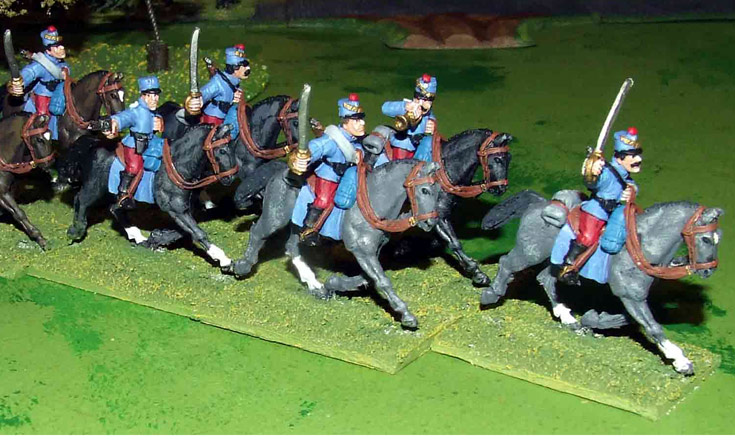 Due to yet another baby crisis Dougie failed to show up this week, so instead I joined in a First World War game staged by Colin Jack. Colin’s lime-green table, buildings from a mix of regions, and troops with shiny varnish all had a lovely “old school”, reminiscent of the games I used to play as a teenager, based on those inspirational books of my childhood, Introduction to Battlegaming, Battle and Charge.

In this game the plucky Belgians were holding out in Houfflaize, facing an attack by a division of Germans. Their aim was to hang on long enough for reinforcements to arrive – columns of French and (rather bizarrely) British troops were marching to the sound of the guns. Things were made a little harder for us Germans by having our troops advance one brigade behind the other, which meant we had to attack on a limited frontage, and expect our leading units to be shot up. We decided to launch the first brigade against the town, while the second would work its way over to the left, to face the expected French reinforcements. Then the reservists of the 3rd brigade would reinforce the assault on the town. It all seemed pretty straightforward, but of course games run by Colin Jack are never that simple.

The French appeared on the southern table edge from Turn 1, and their deployment was covered by a seemingly suicidal charge by Belgian Guides and French Chasseurs. In fact the cavalry swept all before them, riding down a battalion of German Jaegers, and then a battalion of infantry behind them before their saddles were finally emptied by massed Mauser rifle fire. After that the German 2nd brigade never really got back into the game.

Meanwhile the town attack bogged down in the face of steady casualties until the Germans were able to bring up their artillery and machine guns. Eventually this added firepower turned the tide, and the Belgians were literally shot to pieces, allowing the battered German infantry to storm the town. An unexpected appearance of a Minerva armoured car might have turned the tables again, but the Belgian vehicle was soon despatched by a lucky shot from a German field gun.

The leading units of the French column tried to fight their way through to the town, but their bayonet charge of a German unit blocking the way came to naught, and the game drew to a close. During the final turns the British contingent made an appearance to the west of the town, but it arrived too late to play any part in the battle.

In the end the game was deemed a draw, but one that slightly favoured the Germans. After all, they had wrested control of Houffalize from the Belgians, and were it not for that dashing Allied cavalry charge they would probably have swept all before them. As ever we used Chris Peers’ Contemptible Little Armies, a very bloody “4,5,6 you’re dead” kind of set, which added to the “old school” feel, but nevertheless seem to capture the flavour of the period, in no small part due to the appallingly high level of casualties everyone tends to suffer in these bloodbath-like games! As usual, great fun was had by all.