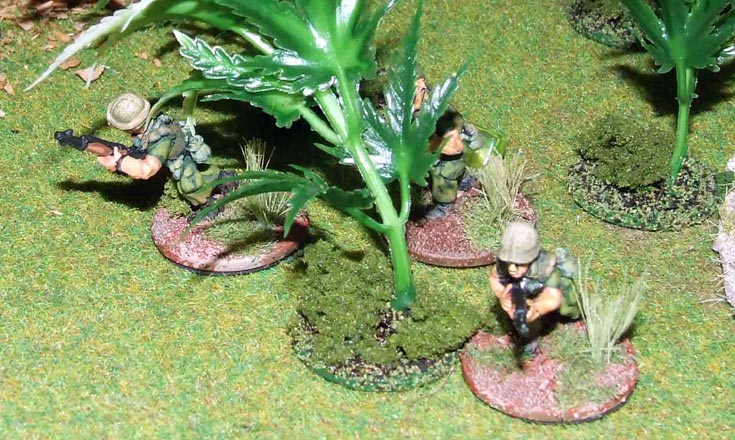 Disposable Heroes are a playable but slightly slow set of Second World War skirmish rules, but at least we’re familiar with them. So, hen they recently came up with a “Modern” version it seemed a good idea to try them out. Well, for Christmas I was given a 1/50th scale Huey gunship, and several packets of US Marines from Vietnam. It seemed sensible to paint these up and try out the period. This was a tiny game – just a squad a side – designed to test things out rather than anything grander.

The scenario (if there really was one) was taken from a series of linked Vietnam skirmish dug up by Dougie Trail. All were set in the jungles and hilltops surrounding Khe Sanh, and this one represented the first clash between the Marines and a small force of North Vietnamese regulars. Like any good dupes I marched down the trail in “indian fashion”, waiting for the sound of machine-guns.

When it came the NVA light machine gun killed or wounded three of my men – a quarter of my force. The rest tumbled into the jungle on both sides of the trail, and in the firefight which followed they managed to cause at least one NVA casualty, but suffered a few more themselves. After five turns the Vietnamese blended back into the jungle.

The game was over so quickly we had time to play it again – this time with a forewarned American player. This second outing was a little more successful, and the majority of the NVA squad was wiped out, although once again not without suffering significant American casualties in the process.

The Disposable Heroes team are planning to release a Vietnam supplement around the end of the year, but until then we have to figure things out for ourselves. While the basic rules work pretty well, we need to sort out a few things before our next game, such as defining where terrain features start and stop, and a few other small problems relating to line of sight. The Disposable Heroes firing system involves working out how many weapons in a fire team can bear at a target, then halving them (rounding up). this represents guys loading, crouching behind cover or generally doing things other than firing at the enemy. Its a slick way of avoiding keeping track of what every figure is supposed to be doing. Firing can be bloody, but usually if both sides are in cover it takes a lot of fire to cause many casualties. However, of a unit is caught in the open (like my guys on the trail), then it can all be over very quickly indeed.