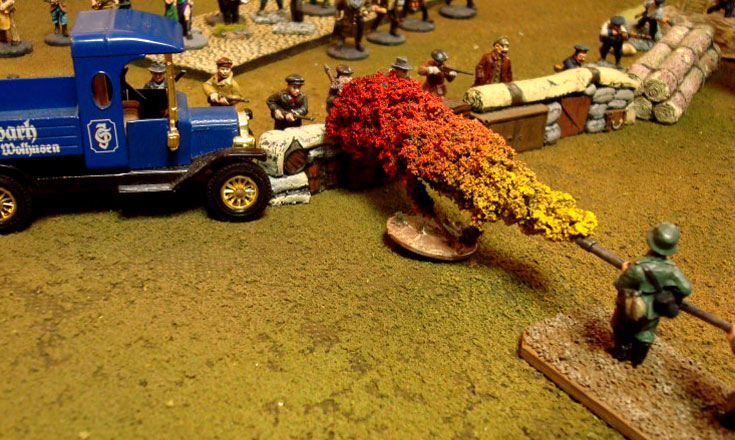 I have to say, I was more of an observer in this game than a participant, as I was waylaid at the Book Festival, and only appeared once things were underway. Still, Dave and Sam Marks were on hand to take the part of the Spartakus League (the Communists), defending the Berlin from the right-wing Freikorps. The battle took place in front of the Brandenburg Gate, represented by a beautiful model crafted by Hugh Wilson.

The Freikorps attacked through the park of the Tiergarten, which meant crossing an awful lot of open ground – apparently this bit wasn’t particularly wooded.

Well, as you’d imagine it was a bloody business, particularly as we were playing with a set of Chris Peers’ rules. The Marks father and son team mowed down the Freikoprs in droves, and then brewed up an armoured car which tried to storm its way into Pariser Platz from the Under den Linden. The Spartakists were suspiciously well armed, and their impressive field defences included machine gun positions.

Still, the veteran Freikorps finally managed to breach the lines to the south of the gate, spearheading their assault with a flamethrower. The Spartakists saved the day by throwing in their reserves – a unit which seemed to consist of several Berliner “ladies of the night!

The game ended when this last Freikorps attack failed. the battle was far from one-sided tough, and the experienced riflemen of the German army caused significant casualties on the Communists as they advanced. It just wasn’t enough to prevent the Spartakists from emerging victorious. It was an extremely pretty game, with some great buildings, a motley selection of armed civilians, and even a few suitably Germanic toy vehicles, just to help set the scene. I’m constantly amazed by what Colin Jack has in his collection, and baffled by how he finds the space to store it all!