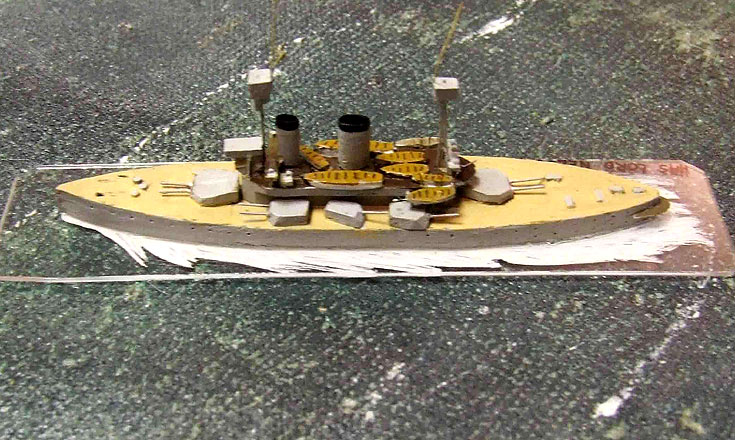 For the first time in ages we played a naval game, largely because the planned Second World War scrap had to be cancelled because the organizer was in New York. It gave me the chance to field the beautiful scratch-built models I bought earlier this year – all the work of the late Mike Earll. I based them up, gave them a small lick of paint and here’s the result – some of the nicest ship models you could hope to see on a wargames table.

The game was a multi-player affair, with everyone taking command of 2-3 ships. It started with just an Austo-Hungarian squadron on the table (The battleship Erzherzog Karl and the light cruiser Tiger), facing a French battleship (Charles Martel) and a British protected cruiser (Arrogant). Reinforcements came on when someone rolled a “six”, and the luck was with the Germans, whose three battleships (Kaiser Wilhelm der Grosse, Hessen and Deutschland) and two armoured cruisers (Scharnhorst and Freidrich Karl) arrived within the first two turns. Two British armoured cruisers also appeared (Cumberland and Aboukir), but soon found themselves completely outgunned by the German pre-dreadnoughts. Late in the day the last British ships arrived – two powerful battleships – the Lord Nelson and the Venerable.

The Arrogant was the first casualty, the British captain electing to risk not flooding his magazine when his ammunition hoists were hit. When the pall of smoke cleared the Charles Martel was on her own, but she pluckily fought it out for an hour before she went under – pounded by German shells. The British armoured cruisers were suffering badly as they tried to close the range, and the Cumberland was the next to slip beneath the waves as her crew failed to stop her flooding damage from spreading.

The Central Powers didn’t have everything all their own way though, as the Cumberland rammed a German battleship, and the Aboukir sank the Austro-Hungarian cruiser. Meanwhile the British battleships wisely kept their distance, and pounded the Scharnhorst into floating scrap metal. However, by the end of the game the Germans and their Austro-Hungarian allies were the clear winners, losing just one light cruiser to the Allied losses of a French battleship, and two British cruisers.

As with all our games the rules we used were Perfidious Albion, a set allegedly first devised by Colin Jack – the Austro-Hungarian player. They can’t be taken too seriously, and we both silly and good fun at the same time! What more could you ask for?!