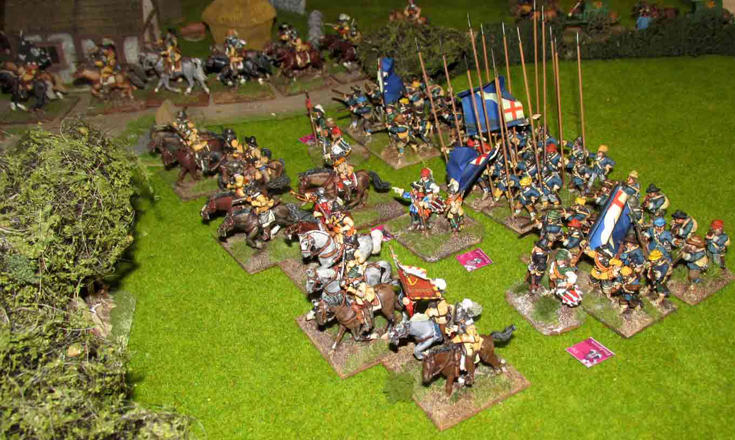 This little game was a replacement – we’d intended to play a Spanish Civil War battle, but two of our group couldn’t make it. So we scaled down, changed Civil Wars, and replaced the plains of Aragon with the fields of Yorkshire. The scenario was a rerun of the old classic “wagon train” teaser, where one side – in this case the Royalists – had to get two wagons filled with pay for the garrison off the far table edge. A Parliamentarian force had sallied from their own nearby garrison, and was trying to stop them. The Royalists’ route took them onto the south edge of the table, through a small hamlet of Cawood near Selby, and then across the River Ouse by way of a ford. From there the road exited the northern table edge. Guarding the wagons were two regiments of Yorkshire foot, two small regiments of Northern horse, and a dismounted detachment of dragoons. The Parliamentarian force was of a similar size, drawn from Sir Thomas Fairfax’s command.

The Royalists began well, with their cavalry leading the way, and their wagons trundling into the village and on towards the ford. The Parliamentarians were allowed to come on using the road in the north-west corner of the table, from the road leading off the western edge, or anywhere in between. The only proviso was that they entered in march column. The picture below shows the first turn, with the two columns entering the table, and the Royalists approaching the village. Sean’s Royalists made it to the village first, and his cavalry deployed in the fields between the hamlet and the nearby Church of All Saints.

Alan commanding the Royalists had split his forces equally between the two roads, and while one raced towards the church, the other deployed in the meadow to the north of the hedge-lined lane leading into the village from the west. As his first regiment – Overton’s – deployed in the churchyard, the supporting cavalry regiment of John Lambert rode around the churchyard, and deployed between it and the river.

This was too much for Col. Tuke’s Royalist Horse, who charged forward and smashed into the Parliamentarian cavalry. The struggle lasted two turns, but in the end Lambert’s horse were forced to route, largely thanks to their Colonel being killed trying some needless heroics. revenge was in the offing though, as the second Parliamentarian cavalry regiment – Charles Fairfax’s – trotted into the back of Tuke’s horsemen, and the melee started afresh. The second unit of Royalist cavalry led by Sir Richard Dacre ignored the fight, and rode around it, setting off in pursuit of Lambert.

Back in the centre of the meadow things were also hotting up, as the musketeers of Sir Thomas Tyldesley’s regiment held off the approaching Parliamentarians of Oveton’s foot, while Tyldesley’s pikemen stormed the churchyard. The second Royalist regiment – Lord Mansfield’s foot – were busy escorting the wagon train, which by now had reached the ford. The dragoons were in action too – Washington’s dragoons supported the Royalist left, while Thomas Morgan’s dragoon crossed the bridge by the church, to block the road the wagons were trundling down.

The firefight was protracted, but it took a few turns before there were any significant developments. A file of musketeers from John Bright’s regiment had been detached from the rest of the regiment, and used to bolster the strength of Overton’s men. Bright’s muskets were eventually broken after suffering about 25% casualties, and they retired from the field. Meanwhile at the churchyard two assaults by Tyldesley’s pikemen were repulsed, the second one with casualties.

Off to the east the cavalry were busy charging, retiring and countercharging – all very pretty – but essentially it was developing into a stand-off. Behind the church Lambert managed to rally his cavalry regiment, and they turned to face the threat of Sir Richard’s horsemen. In what was meant to be a game of manoeuvre, both sides had now become sucked into a brutal fight in the centre of the table, spread out around the meadowland to the south of the church. It was still all to play for.

Having spotted the Parliamentarian dragoons, Sir Francis Mackworth who commanded the Royalist force ordered the wagons to halt, and sent forward Lord Mansfield’s foot regiment to clear the road. That though, was matched by another significant move by the Parliamentarian commander, Colonel Sydenham Poyntz. He was watching the battle develop from the churchyard, and saw that only Morgan’s dragoons stood in the way of the Royalists and victory. He had a reserve though – the infantry of John Bright’s regiment, minus the detached file of musketeers. They duly crossed the bridge and formed up behind the Parliamentarian musketeers. The task of clearing the road north had just got a lot harder.

It was about to get worse. While the other cavalry regiments were still clashing without any significant outcome – both were accumulating “terror markers”, but not much else – Dacre’s horse charged into John Lambert’s cavalry, and were duly repulsed. This brought a breathing space for Colonel Poyntz, who ordered Lambert to ignore the reforming Royalist horse, and instead make his way across the bridge, to bolster Bright and Morgan’s defenders on the east side of the river. That was where we ended the game, having run out of time.

We always do this – put just a little too much lead on the table to finish the game in  a sensible evening. However, it was clear that the Royalists now lacked the strength to force a passage for the wagons off the north edge of the table. Victory was therefore awarded to Alan and his Parliamentarians, but to be honest the battle could easily have gone either way. The rules – Very Civile Actions – a free download from The Perfect Captain – have their faults, but all in all the game worked well, and above all it looked terrific!