This was our second foray into the world of Skype gaming. This time, I took charge of a brace of T-34s, while Gyles led a pair of German tank destroyers into battle. We started off at opposite ends of a 6×4 foot table, with fairly open terrain on it – a few woods, a small hamlet and a field and farm. 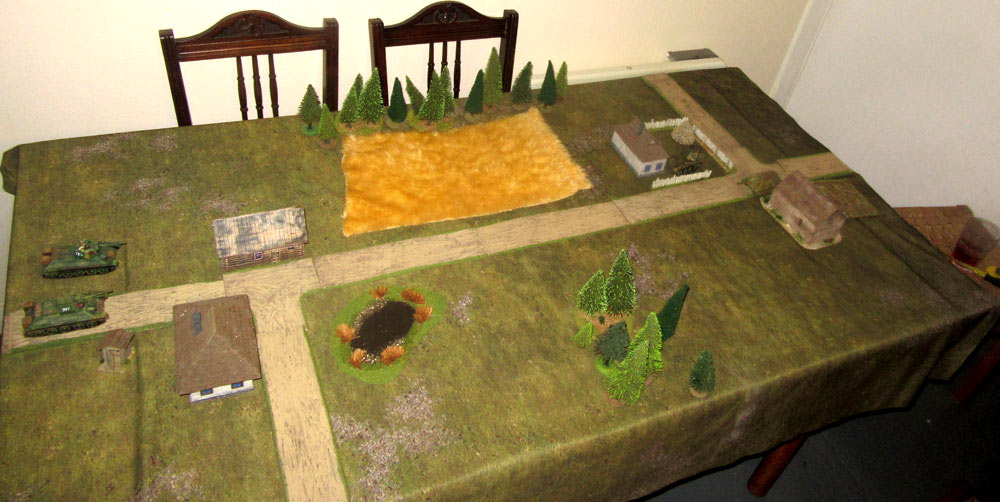 In What a Tanker!  you can command as many tanks as you like. Last time we had one AFV each, with fairly mediocre guns. This time we upgraded the number and power of the toys to produce a quicker game. It worked! 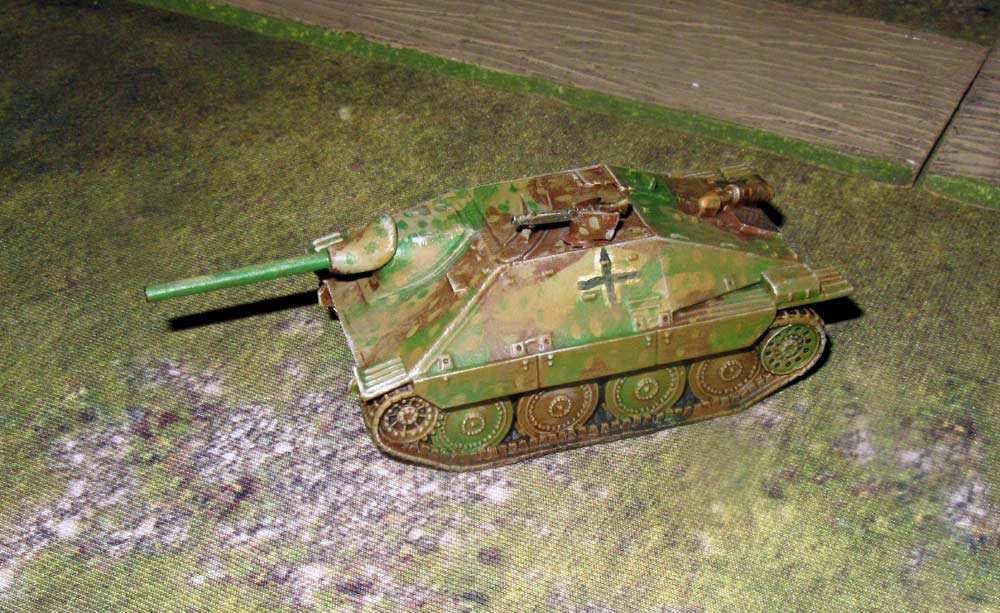 The Germans won the initiative, and Gyles stuck his Marder III at the side of a nearby farmhouse, giving it some cover. The Hetzer though, was on the road – a straight road – and could see my leading T-34/76 at the far end of the table. He had a clear shot – and he took it. 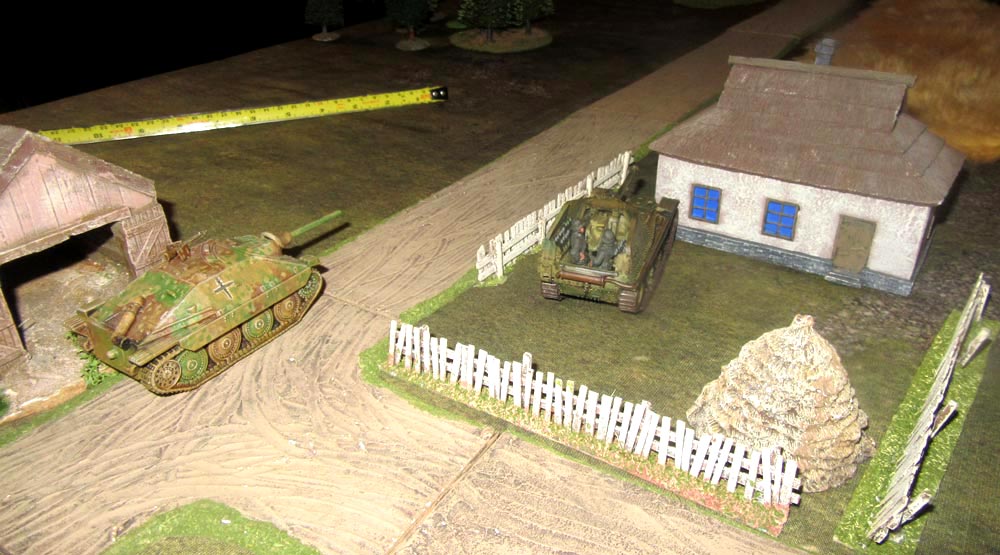 In What a Tanker! The Hetzer is a powerful little beast. Its 75mm gun earns it 7 strike dice, and after successfully acquiring, aiming and hitting the target Gyles needed 5s or 6s on a his seven D6s to hit me. He rolled five of them! 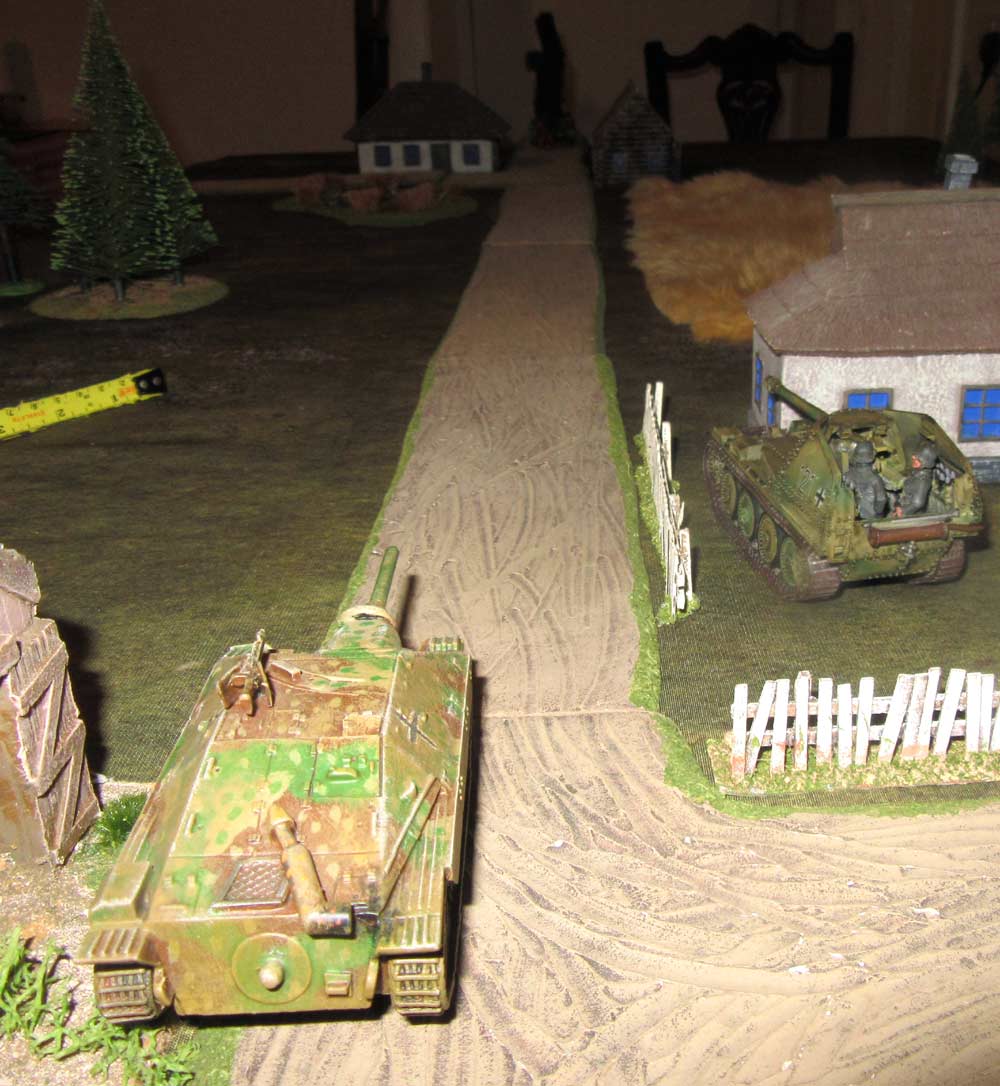 I had armour of 6, and could ward off the shots on a 5-6. My six dice though, only managed two, so Gyles’ hits exceeded my saves by three. That meant the T-34 was brewed up. First strike to the Fascist invaders! I rolled lousy dice for my remaining tank, and so it headed for the cover of one of the nearby buildings, while it waited for the right moment to fight back. 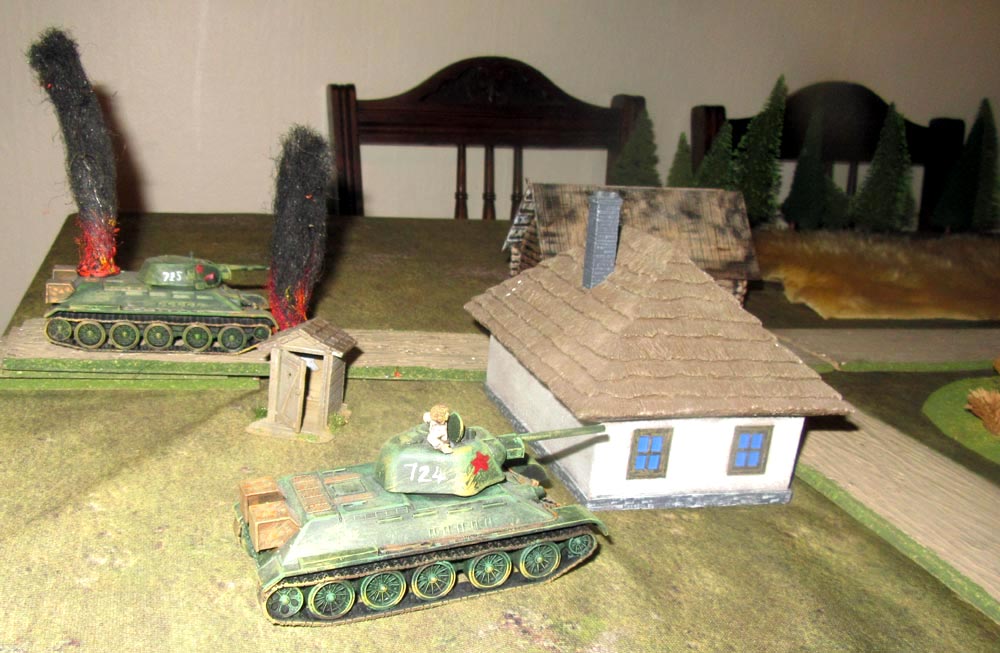 Meanwhile, the Marder moved up to the wood halfway down the table, while the Hetzer speeded off to the hamlet. That meant all that lay between my last T-34 and the enemy was a flimsily-looking house. 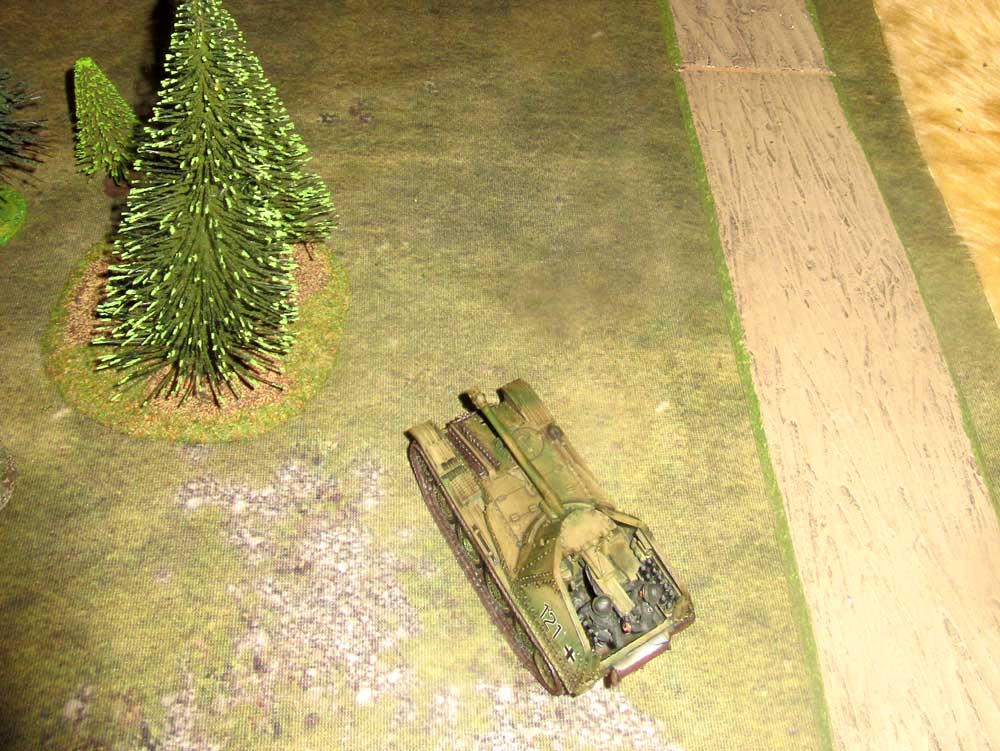 Inevitably, I poked my snout around the edge, to take pot-shots at the Marder halfway down the table. I never managed to hit her, but for now Gyles’ return fire was just as lousy. 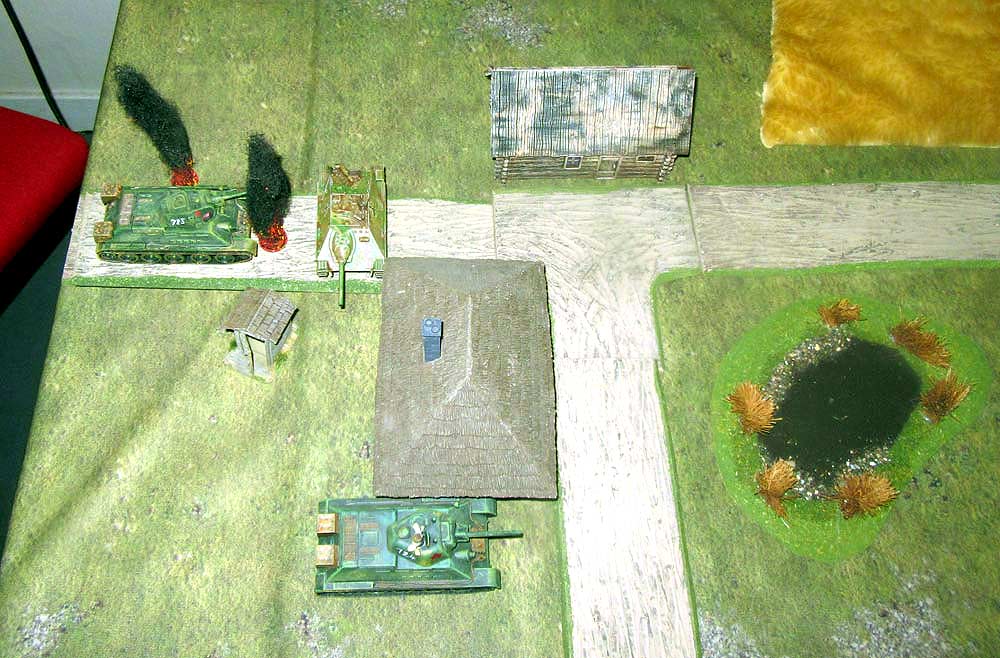 That’s when the Hetzer turned around the edge of the building and took a close-range shot at my tank’s port quarter. It missed thank goodness, but that prompted me to trundle forward, putting the building between me and the Hetzer. That of course left me fully exposed to the Marder. 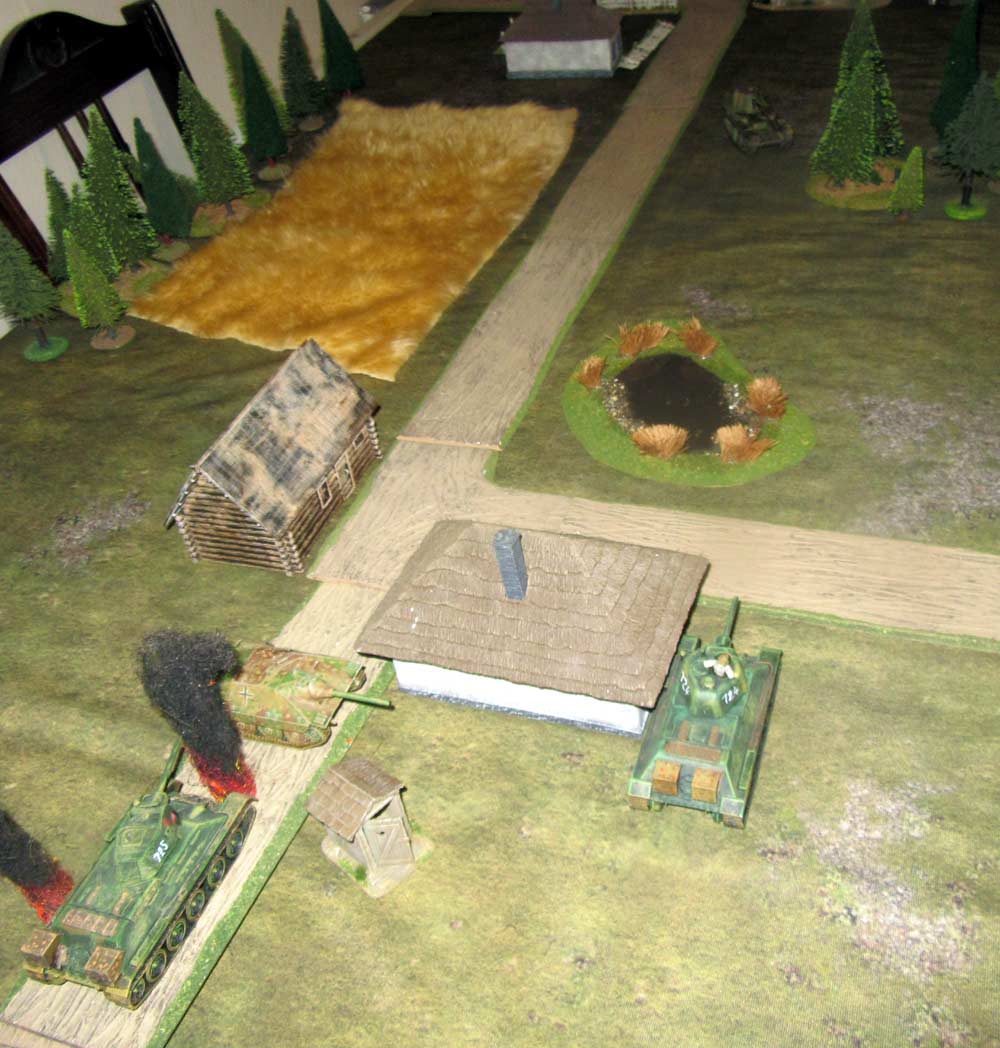 Gyles took his shot, needing 6+ on 2D6 to score a hit. He rolled a “7”. A palpable hit!  Like the Hetzer, the Marder also has 7 strike dice, and Gyles scored four hits. I had six saves, and got a measly one. So, it was another kill! So, with two burning T-34s on the tabletop this was a clear German victory – and a quick one. In our last game we played for an hour and twenty minutes, and didn’t score a kill. This time the game was over in less than 20 minutes! 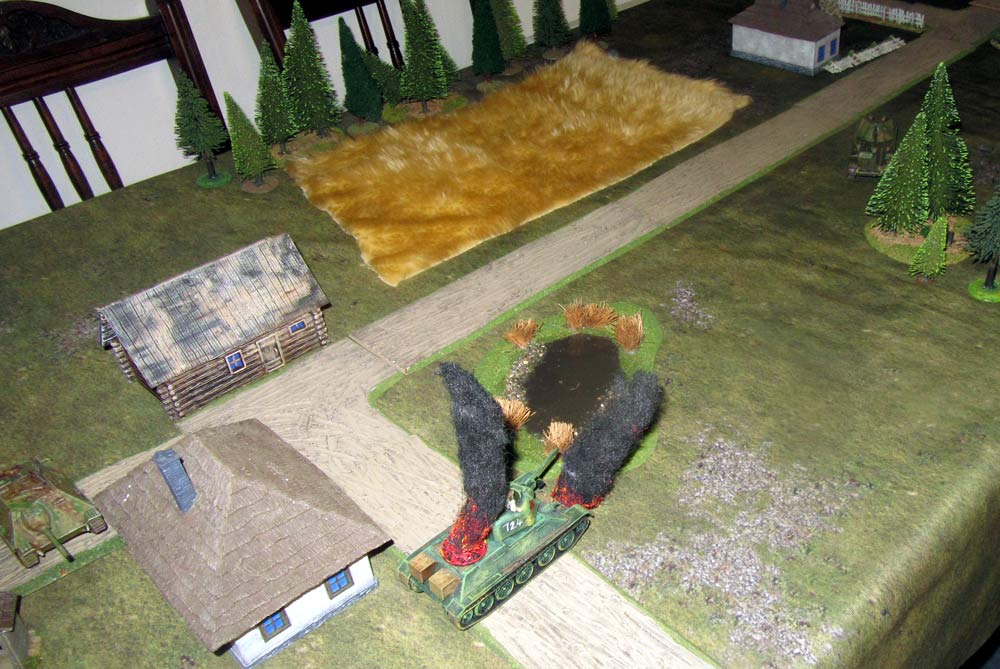 The whole Skype thing worked fairly well. I’d set my laptop up overlooking the table – a bit like the big overall picture uop above, only a little less sweeping. I then used my mobile phone to talk to Gyles, and to show him the table from other angles, such as the line of sight from an AFV, or a looking straight down view. I think we’re ironing out the teething troubles with this virtual gaming thing, and we’ll certainly give it another go.