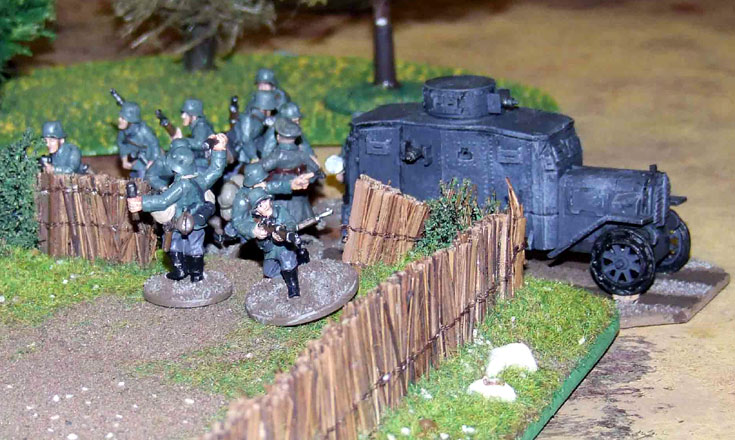 The Back of Beyond, Red Actions, 28mm

This week we played a little Back of Beyond game using Red Actions, the freebie rules set from The Perfect Captain. this was unusual, as we usually game the period using the simpler  Contemptible Little Armies set, with their Back of Beyond supplement.

It was a straightforward enough encounter – German-equipped Freikorps interventionists v the Red Guard, with both sides having a small mixed force of infantry, supported by an armoured car, a machine gun and a field piece, with the Bolsheviks also having a unit of cavalry. It seems the red Guard were personally commanded by Trotsky, assisted by an opera singer…

The Bolsheviks had some early success, but half-way through the game the German Erhardt armoured car saw off its Austin-Putilov counterpart, and a unit of Red Guard were routed by machine gun and rifle fire. The Red players never managed to regain the initiative, and the Germans were helped by some lucky die rolling by their Minenwerfer section.

As games go it wasn’t one of our best – a late start and a lack of familiarity with the rules meant that we never reached a proper conclusion – even though it was pretty clear that the Bolsheviks were on the ropes. Worse, the terrain wasn’t up to our normal standards, mainly due to lethargy, with the result that some nice figures are shown here against an altogether mediocre backdrop. My apologies, and we’ll put more effort into it next time! Otherwise the Commissar might get me…