This week we were off to sunny Spain, and a Chain of Command game involving more than one platoon a side, set in the Spanish Civil War. We usually abbreviate that to “Big Spanish CoC”. This one was an attack – defence game, set in the Guadalajara offensive or March 1937. Lindsay’s Italian CTV “Blackshirts” and Sean’s Spanish regulars of the Banda Nacional were pitted against a platoon of my International Brigade, and Gyles’ Anarchist militia from the CNT. We played it out on an 8×4 foot table. 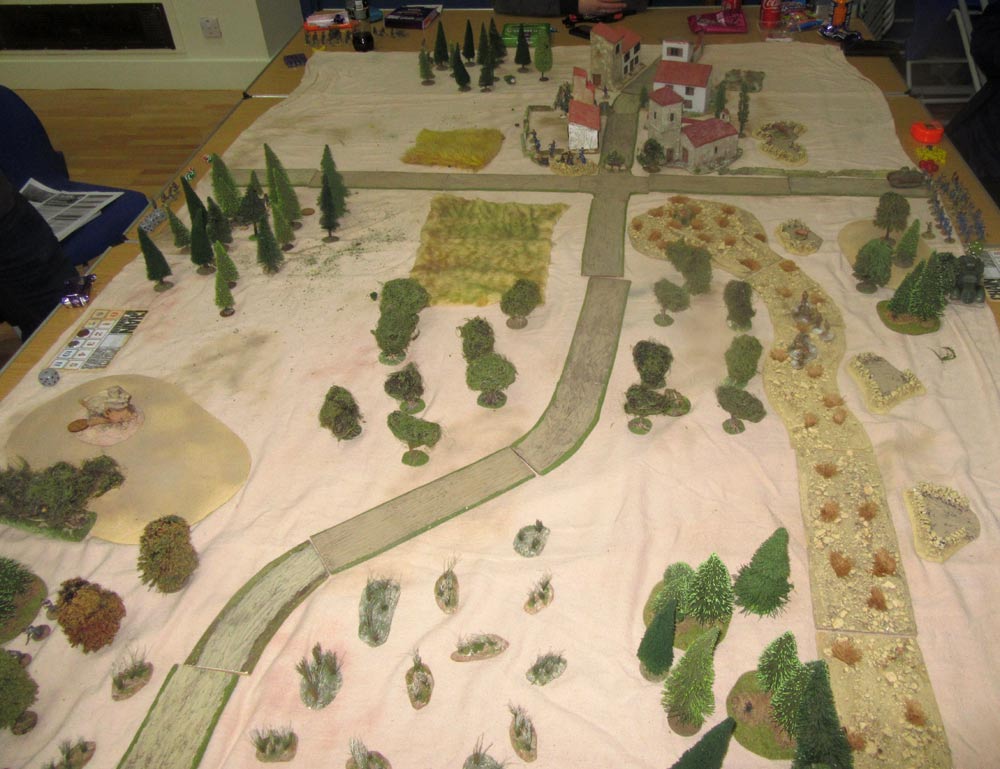 In this game, Lindsay had just finished painting up her Italians, and given the inexperience of the Blackshirts in the campaign then we rated them “raw”. That neatly countered Gyle’s anarchists, who were also “raw” militia. Sean’s nationalists and my Internationalists were both rated “regular”. Each side had an extra player too – Mally for the Republic and Shane for the rebels, who were given infantry and armour to play with. In this game, the objective was the village of Valdenoches on the road from Guadalajara to Torijo. 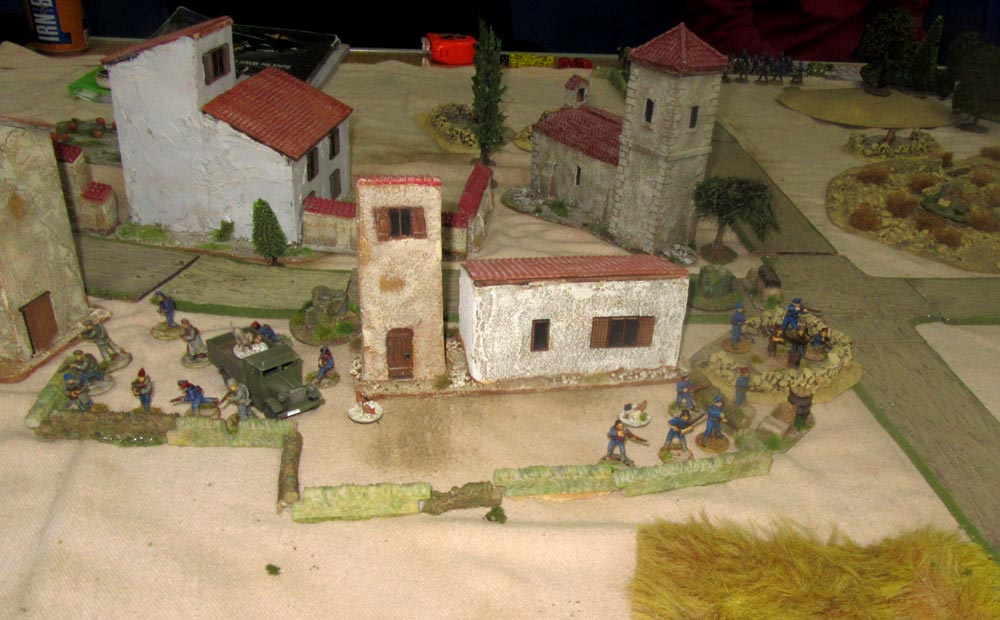 Valdenoches was held by the CNT, while my international brigade troops had their jump off points in olive groves and a druid-up gully to the south-east of the village. The Italians approached the town from the west, while the Nationalists came up the main road from the south. It took a couple of phases for the two sides to get within range – the attackers used as much cover as they could, the Italians advancing through woods to the north-west, and the Nationalists through woods and olive groves to the south. 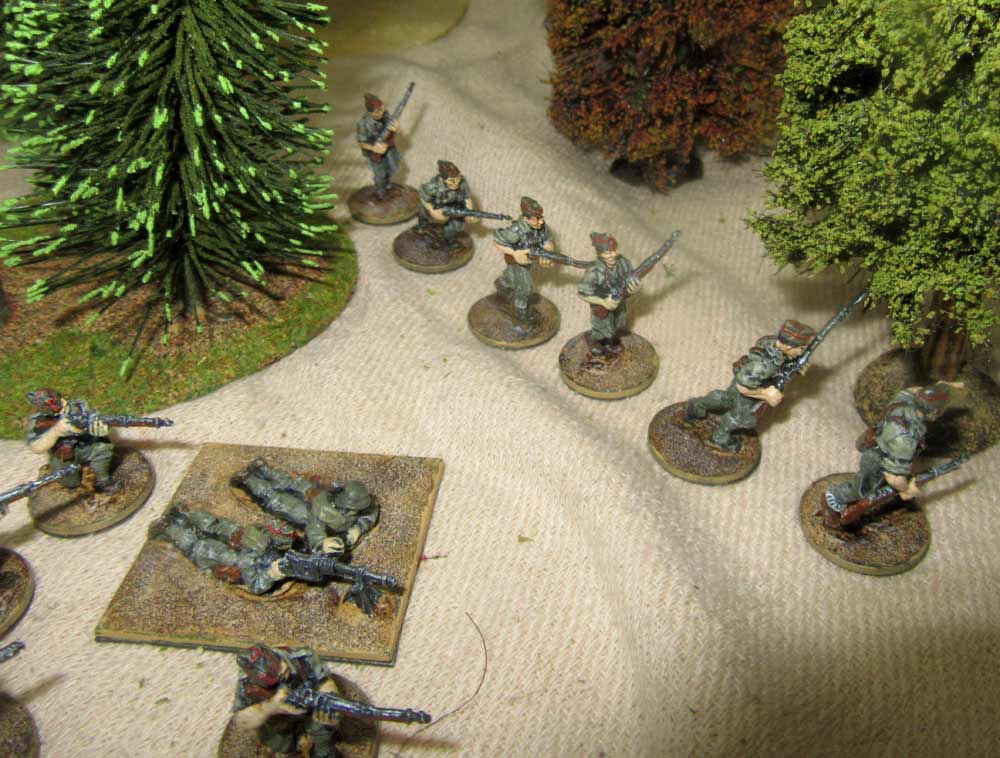 Eventually, Sean’s rebels came within sight of my light mortar section, deployed in an olive grove, with the tubes themselves in the dried up river bed behind it. They got two attacks in, killing three of Sean’s regulars before the Nationalists hid themselves deeper in the grove. To the south, Sean’s armour appeared- a captured T-26 in rebel colours. Then Lindsay’s off-table mortars opened up, but failing to do anything more spectacular, apart from killing a solitary Anarchist, and pinning down the defenders. 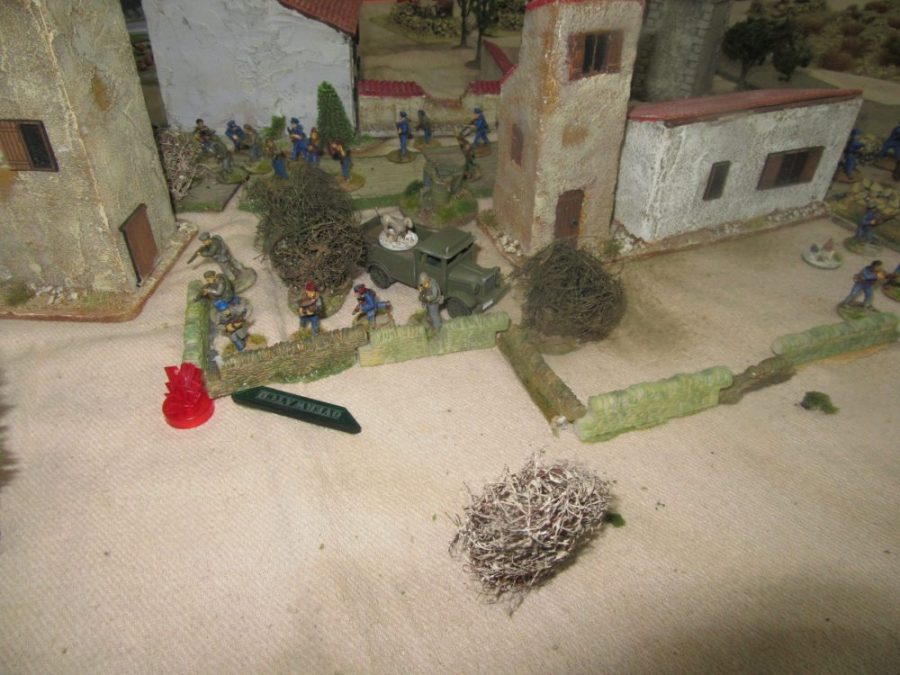 Next a tank duel began between the captured T-26 and Gyles’ anarchist FT-17 tank – one of the ones with a 37mm gun in it. Eventually Shane got a decent shot in, causing two hits, which immobilised the Republican tank, and forced the crew to bail out. Not to be outdone though, Mally brought up his Hispano-Suiza armoured car – the kind with the 45mm gun on it. So, another duel kicked off. 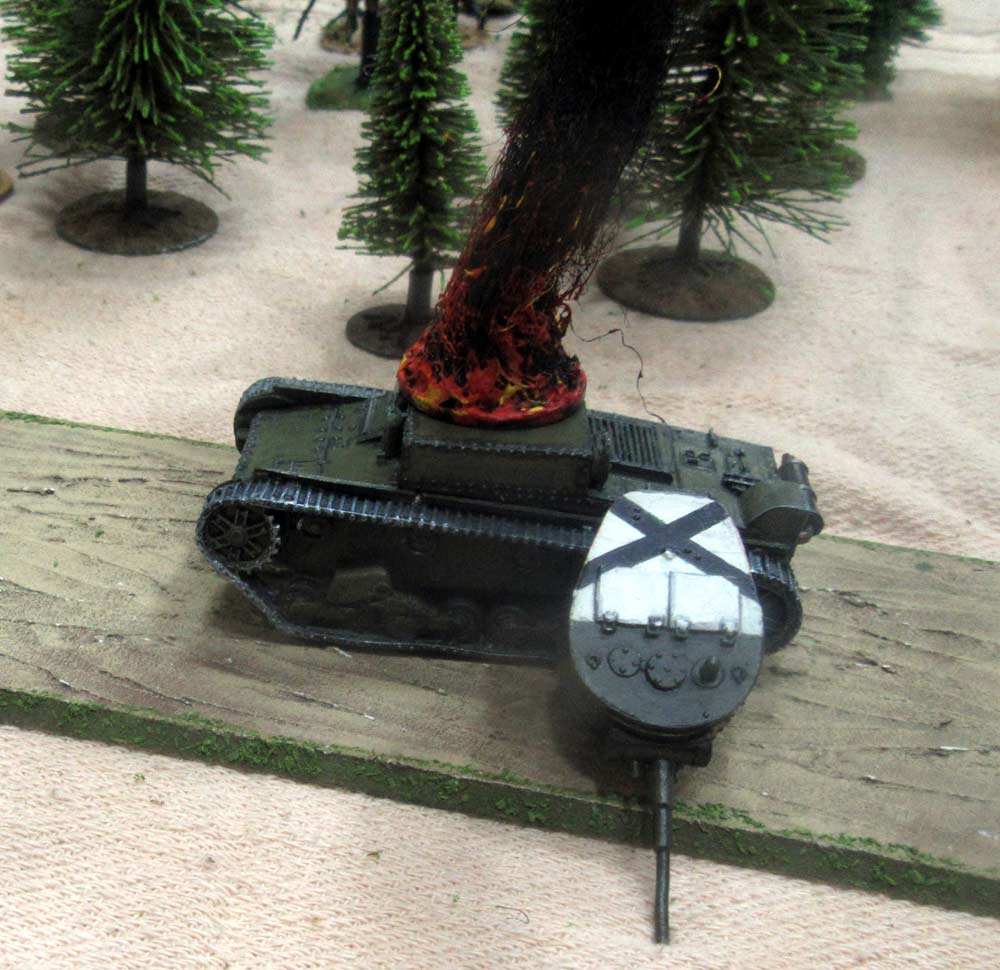 This time, it was Mally who rolled the good dice, getting three hits on the rebel tank, which Shane failed to save. So, it was brewed up – in fact it exploded, leaving the over-sized and over-powerful Republican armoured car dominating the roads leading into the village. 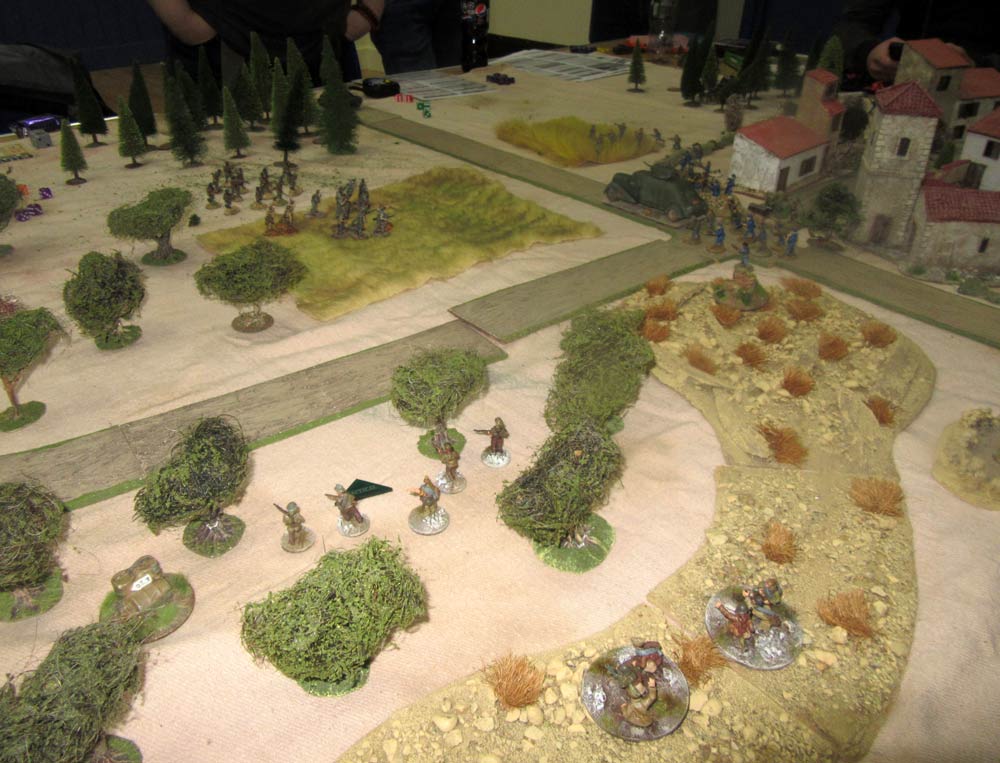 In Valdenoches itself, Gyles solved the mortar barrage problem by ending the turn, forcing Lindsay’s observer to call down the shoot again. Actually, he wasn’t doing a very good job – in three phases he managed to lose contact with the battery twice. Next the observer tried to target the Republican armoured car, but although successful, the mortar rounds didn’t manage to damage it. 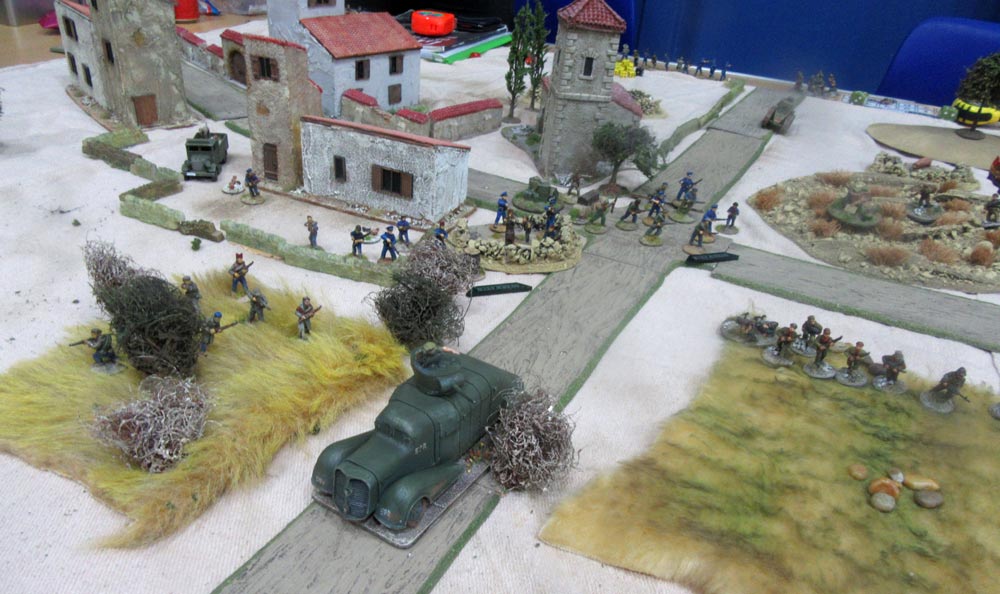 Lindsay’s Italians were creeping forward slowly, but the leading Nationalist section had almost reached the edge of the village. Sean was using a wheat field for cover. We decided it blocked line of sight as long as the guys in it didn’t run, but of course it didn’t stop bullets. So throwing caution to the wind, Gyles came out from the cover of his village, and advanced to meet the attackers. So too did Mally and I, as we crept as far west as the main road towards Guadalajara. So, it looked like the battle was reaching its climax. 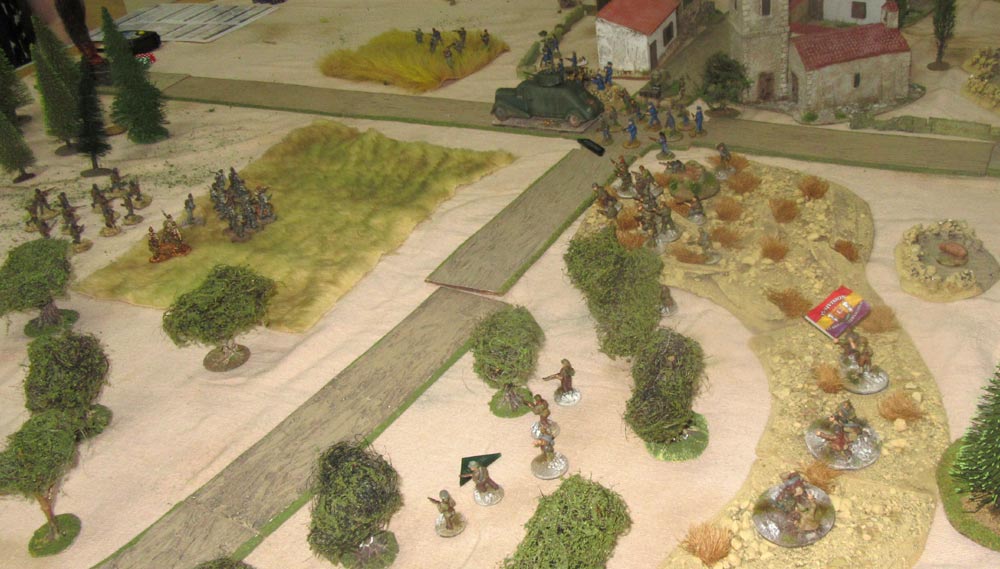 Sure, the Anarchists and the Italian blackshirts had been firing at each other for some time, but as both units were green then casualties were relatively light. The new mortar barrage also stopped Gyles’ anarchists from advancing closer to the Nationalists. 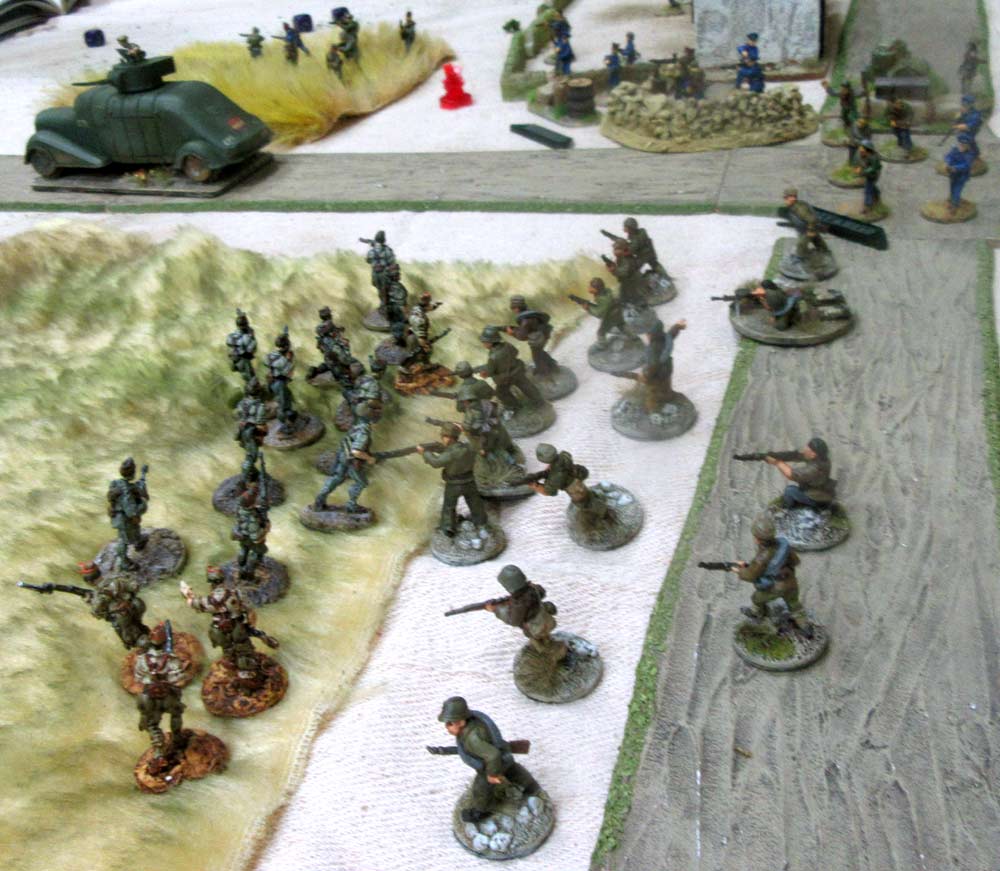 Thinking this was his moment, Sean decided to hurl his leading sectino of Nationalists into the fray, charging through the wheat to fall on Mally’s section of the International Brigade. As the defenders weren’t on “Overwatch” they didn’t get to fire as the attackers charged in. They were rated as “Aggressive” though, which meant they fought back with gusto. Also, Mally’s section was fresh, while Sean’s one had already taken casualties and hits from my light mortars. In the end, after a sharp fight, the assault was thrown back. 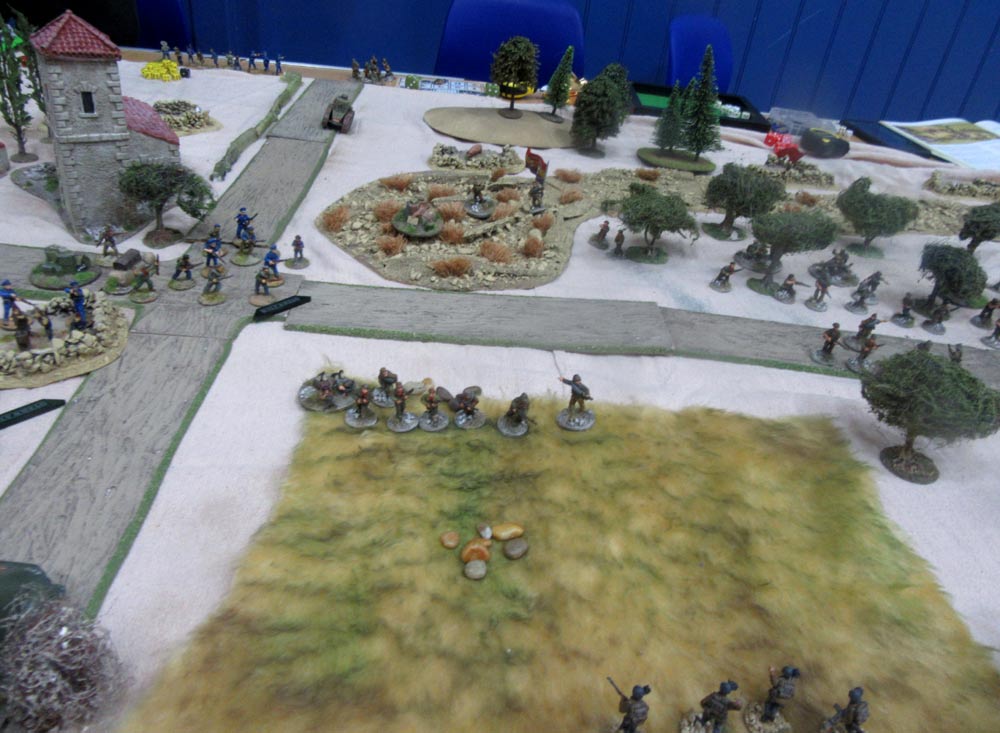 It was touch and go though – Sean suffered eight men dead, and Mally lost seven. Both had a pile of shock markers too. So, in the next round, Mally fired at the rebels, and forced the few survivors of Sean’s squad to break and run. By that time the morale of the Nationalists had fallen quite a bit, and so, as we were running out of time, we decided to end the game. it was clear that Valdenoches wasn’t going to fall any time soon. that, of course, is the trouble with “big CoC” – games are too sprawling to finish on a club night! Lindsay’s Italians hadn’t even got themselves fully out of the woods and in to the action. So, next time we’ll play a smaller game! 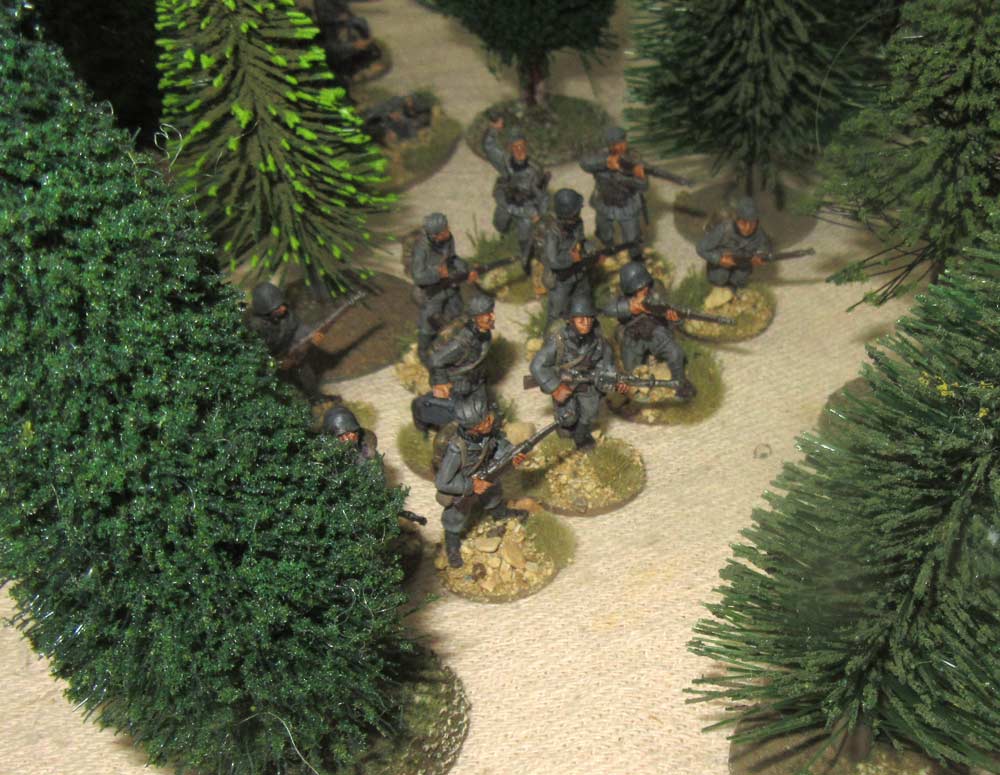