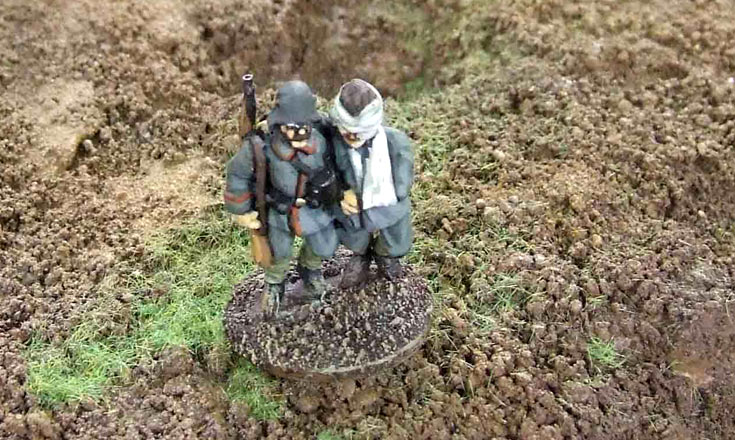 We thought we’d try out To the Last Man, a new set of rules by Chris Peers. Actually, they’re not really new, as they use the same combat system he’s used before, for other periods. This is simply a First World War version of it, and in truth it isn’t that dissimilar to Contemptible Little Armies, only more geared up for skirmish play rather than bigger battles. The figure scale is 1:1, so the basic unit is the infantry squad.

We set the game up for a trench assault, with the Germans attacking, and consequently outnumbering the French defenders about two to one. The “big push” involved four squads, supported by a machine gun and a couple of flamethrowers, plus a platoon headquarters. the French had a machine gun, an LMG, and two squads, plus their own platoon commander. We launched them all forward, two units “rushing” on the right flank, while the left and centre advanced at a more leisurely pace. The faster you go the more ground you cover, but the easier you are to hit.

Well, casualties began piling up, particularly on the two flanks. My left flank unit went to earth in no man’s land, their morale shaken by the heavy casualties. The same happened on the right, but somehow the advance was more successful, and the momentum picked up as the Germans approached the French-held trench line. The attackers reached the trench, and overwhelmed the defenders through sheer weight of numbers, and more than a little luck. The centre also reached the trench line, only to be chopped up by a French counter-attack. At that point my central section was down to half strength (just six men), and it broke. Similarly my attack on the left ground to a halt, and the assault there wasn’t going anywhere.

However, we’d reached the French trenches, and occupied about half of their front line. At that point the remaining French broke off the fight, pulling back to their second lines of defence. While the game ended in a minor German victory, it was a hard slogging match, and the assault was extremely costly – just as you’d expect. We took about 40% casualties, as did the French – although all of theirs came after their defences were breached.More than anything else this was a playtesting session – a change to try out the Chris Peers’ skirmish rules. Until now we’d tried our standard Contemptible Little Armies (also by Chris Peers), which work quite well, and the First World War version of Disposable Heroes, called Price of Glory. These were really a hybrid between the two other rules sets – a slightly more complex version of CLA, and a less comprehensive version of Price of Glory. By the end we couldn’t agree on which of the three sets we actually preferred. I rather liked Last Man Standing, while Dougie – my French opponent – wasn’t so keen on them. No doubt we’ll try them again, but the jury is out whether or not we’ll actually adopt them.

Tags: To the Last Man