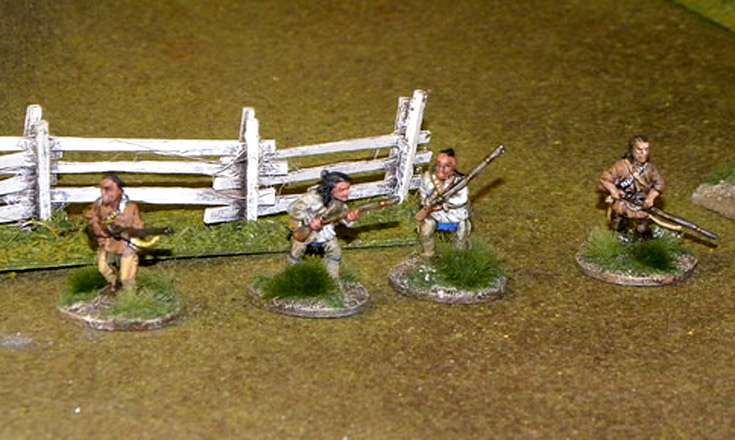 This week I went along to the Edinburgh club and brought my French & Indian toys with me. The game that followed was a multi-player skirmish, with the French attacking a peaceful farming community in Vandalia (my semi-fictitious English colony), and a British garrison marching to the rescue of the settlers. Each player (two French and two British) had an assortment of troops – Iroquois, Companie de la Marine, Coureurs de Bois and Canadian Militia on one side, and armed settlers backed up by four Mohicans on the other. The British reinforcements came on on the turn of a card – one that seemed to take a long time to appear.

The French players (Bart and Bill) entered the table on the northern side of the valley – or one side of the 7×5 table if you prefer. In the photo above that’s the long table edge closest to the church. While Bart’s flitted through the woods to attack the back of the church, Bill’s Marine unit deployed in the trees on the far side of the road, their muskets covering the front of the building. The object of the game was to kill as many settlers as possible – more than half and victory would go to the French. There were four groups of four civilians scattered around the table, and the French players soon worked out that two groups were close to their table edge. So, the church had to be attacked, as did a log cabin in the woods, in the north-west corner of the table.

The attack on the log cabin didn’t work out too well. The fearsome-looking Coureurs de Bois (French trappers) stormed the place, and tried to fight their way in through a door and a window. The place was defended by a teenage boy and three women – just how hard could it be? The answer, of course, was very hard indeed. One trapper was shot as he approached the house, and another killed by a bedpan wielding housewife as he tried to clamber through a window. The stunned trappers fell back to a white picket fence, and contented themselves with some ineffective musketry while they thought up another plan. Over by the church four male settlers opened up a fairly effective fire at the Marines, killing one of them and briefly forcing them back out of range.

Bart’s Indians had a better time of it. Although they lost one casualty as they charged from the trees, they reached the back door of the church and stormed inside. The fight that followed was sharp and bloody. Two Iroquois went down, but eventually the armed settlers were all killed, and the defenceless womenfolk and the preacher were hacked to pieces. That meant four civilians on the French scoreboard. While half of Bart’s Indians attacked the church, the rest moved forward into the eastern end of the valley. Four more civilians were hiding in a farmstead on the far side of a small creek, but that’s also where the British had placed their four Mohicans. While the massacre in the church was in full spate the firefight between the Mohicans and the Iroquois gathered pace.

Of the two British players (Campbell and Colin) one was running the settlers and civilians, while the other – Campbell – only had his Mohicans on the table. He spent most of the game waiting for his British reinforcements to appear. It was Colin who supervised the plucky defence of the log cabin, but eventually his luck ran out. A party of Iroquois arrived, and promptly showed the French trappers how it should be done. They stormed the cabin, and despite losing an Indian in the fight, all four settlers were finally killed. That brought the civilian tally to eight – almost there.

While this was going on more French militiamen arrived, on the western table edge, in the woods leading to the tavern. While the victorious war party and the luckless Coureurs de Bois advanced through a cornfield towards it, the militiamen began firing at the armed settlers defending the place. The settlers were led by the local magistrate, Judge Dread, who managed to hold the attackers at bay – for a while.

Over to the east the Mohicans were being picked one by one, until only a single figure remained. Finally the last of the Mohicans fell to an Iroquois bullet, and the four settlers in the farm were now defenceless. Then, in the very nick of time – the sound of bagpipes were heard. A unit of highlanders appeared up the road from the south, preceded by a unit of green-coated Rangers. Hurrah! The 42nd Highlanders and the Companie de la Marine began a firefight which the British won handsomely. By its end five Frenchmen were dead, and the rest had fallen back towards the church. However, the battle was really decided a few yards to the west, around the Vandalia Tavern.

Covered by the militia the Iroquois sneaked up to the side of the building, and set it on fire. At the same moment the Iroquois leader – Chief Dripping Beaver – issued a challenge to Judge Dread, who duly obliged. As his men and the remaining four settlers fled from the burning building the two leaders fought their own private duel. After two rounds of combat the Judge was cut down by the Indian with his tomahawk, just as he stuck his won dagger into the chief’s heart. Effectively both leaders killed each other! The battle ended there – or almost did. As the civilians fled to the safety of the advancing Highlanders two Iroquois took pot shots at them from around the corner of the tavern. A fleeing woman was shot down, and so the civilian tally was 9 out of 16 – just enough to give the French a victory.

Needless to say the game was terrific fun – everyone seemed to enjoy themselves, and the rules  – Muskets & Tomahawks – worked a treat.