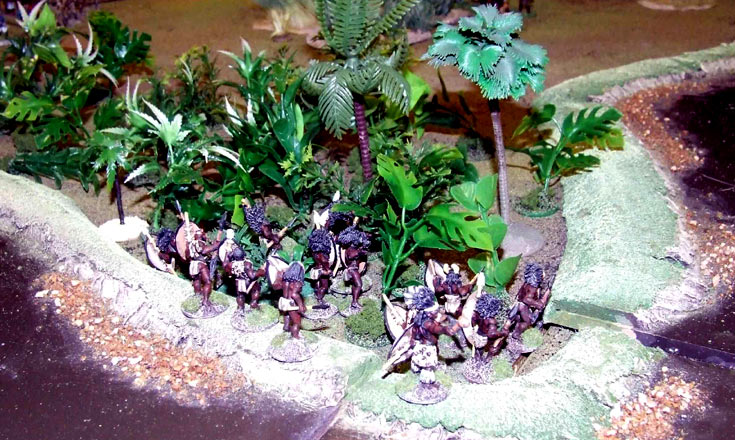 Misc., Darkest Africa, In the Heart of Africa, 28mm

I’ve said it before – you can’t expect a sensible game with a set of Chris Peers’ rules, but you can be sure it’ll be fun. This rare foray into “Darkest Africa was no exception. A Belgian expedition (led by Bill Gilchrist) had to cross the table, where they were due to rendezvous with their Somali allies (run by Colin Jack). The local tribes – the Ngoni on one side and the HeHe on the other – were out to stop them. The game began with the Ngoni player (Hugh Wilson) learning a crucial lesson about European firepower – it can be deadly! His warriors were slaughtered to a man, and his command was reduced to a witchdoctor, lurking in the elephant grass. That left the HeHe. their army was divided into two wings. the left horn (run by Mikowai Staszek) braved the crocodiles, forded the river (losing some warriors on the way), then hid in a patch of jungle, waiting for an opportunity to attack

The right-hand horn (run my me – Angus) saw off a charge by Somali horsemen, then went on to drive the Somalis from the He He village they’d occupied. From there the only was was forward, across the ford and into the remnants of the Somali tribesmen. Those HeHe warriors are good, and in two turns they’d chopped their way through the Somali opposition.The Belgian player had been looking pretty smug after his success against the Ngoni, but at this point everything started to unravel.

He split his force, to protect his baggage. The left-hand horn of the He He decided to charge the isolated Belgian unit. Simultaneously, Ngoni reinforcements appeared (led by Dougie Trail), who rolled up the last remaining unit of Somalis.

The HeHe took a lot of casualties, but once they reached stabbing spear range of the Belgian askari they came into their own, and the Belgian detachment was cut down to a man. Then the Ngoni witchdoctor made his move. He can force a morale check on native units, and in two turns he “spooked” the Belgian baggage porters, who fled off the table. The remaining Belgians formed up to fend off the HeHe and Ngoni who by now had chopped up the last of the Somalis.

The Belgian askaris caused a few casualties, but it wasn’t enough to halt the tribal wave. The game ended as the last of the Belgians were submerged by a wave of locals, wielding nasty stabbing spears. You don’t get much more decisive than that!

Its been a while since our last African outing, and for an occasional, rather silly game, this hits the mark. The rules are simple, fun, and have lots of period flavour. Like any colonial era game though, its all a balance between small, well-armed troops, and marauding hordes of poorly-armed but deadly natives. It isn’t exactly “PC”, but it is darned enjoyable, escapist fun!