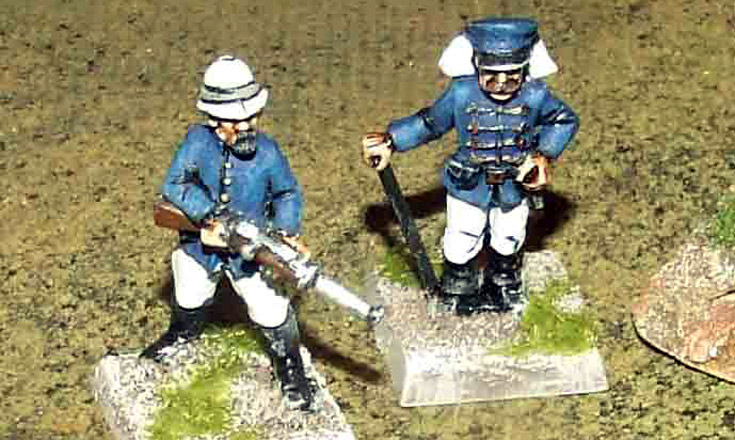 The Great War, In the Heart of Africa, 28mm

Our first game of 2012 was based around an exchange in Black Adder Goes Forth. When Capt. Blackadder asked half-wit Lt. George why the war began, George blamed “the vile Hun and his villainous empire building”. Blackadder replied; “George, the British Empire at present covers a quarter of the globe, while the German Empire consists of a small sausage factory in Tanganiki. I hardly think that we can be entirely absolved of blame on the imperialistic front!” Well, this game centred around the defence of this very sausage factory against a large and well-equipped Anglo-Belgian expeditionary force. Yes, it was all very silly, but this was set during the War in East Africa, a campaign that was bizarre to say the least.

To complicate things, both the Belgians (attacking on the right) and the British Empire troops (attacking on the left) had outflanking forces, which were crossing the Limpeepee River a little off the table, and so would turn the river line. Also, the Germans had to send half their force off table with the stash of sausage meat etc., and after seeing the bearers to safety the units might possibly be able to return to the table in order to help the defenders of the sausage factory.

At first the advance went well – or at least it did until the Belgians came within artillery and machine gun range. The German defenders had one light mountain gun and a machine gun at their disposal, and both weapons began picking on the Belgians. A thin screen of Ruga-Ruga African allies were sent off to the river to delay the oncoming British, while the bearers and their escorts made their way off the table.

The blood-letting really started when the Belgians began wading the river. Their first unit was pretty much annihilated before it reached the middle of the river, while the unit behind fared little better. A third Belgian unit – the outflankers – entered the table and charged the machine gun position, with predictable results. Amazingly the last few survivors of the unit managed to silence the Maxim gun with rifle fire, only to fall in a hail of bullets fired by the Schutrztruppen (German-trained askaris) holding out in the buildings.

The final Belgian unit did a little better by adopting the sensible tactic of going prone and not crossing the river. In fact, they got the better of the rifle exchange with the Schutztruppe on the far side of the Limpeepee, and helped the British as they lumbered forward with their own “big push”. So far the German NCO in charge of the machine gun team was the only “white” casualty…

Then it was the turn of the British. They drove off the Ruga-Ruga in fine style. and when the outflanking unit appeared they covered the river crossing, and everyone formed up for the great advance. An armoured car even turned up, and though it couldn’t cross the river bank it drove up and down the far side, firing at the big whitewashed target of the sausage factory. At this stage the German defenders were down to just a handful of sailors from the cruiser Königsberg and a half-strength company of Schutztruppen. Fortunately for the “vile Hun” the first of their baggage escort began to re-appear on the German table edge, and soon the British were coming under heavy rifle and machine gun fire from their left flank.

When it came, the “big push” was rather more like a “gentle shove”. The leading company of British regulars were broken with heavy casualties, thanks to some good shooting from the sailors. Despite their casualties the battered defending Schutztruppen unit didn’t seem to want to break, and held on until their comrades on the far side of the village-  the ones who mowed down the Belgians – were able to come to their rescue. By now it was becoming clear that the Allies weren’t going to take their objective. So, when the next British company took two morale hits and refused to advance, the British commander decided to call it a day. So, for the time being, the “sausage factory in Tanganiki” remained in German hands – bockwurst and frankfurters for all!

While we usually use In the Heart of East Africa, a variant of Chris Peers’ In the Heart of Africa rules, this time we went for the slightly simpler and even more bloody Contemptible Little Armies set, by the same writer. Even though we made it a little harder to hit people than usual, it still resulted in the usual Chris Peers bloodbath. As I said at the start, it was a silly game, but a hugely enjoyable one!