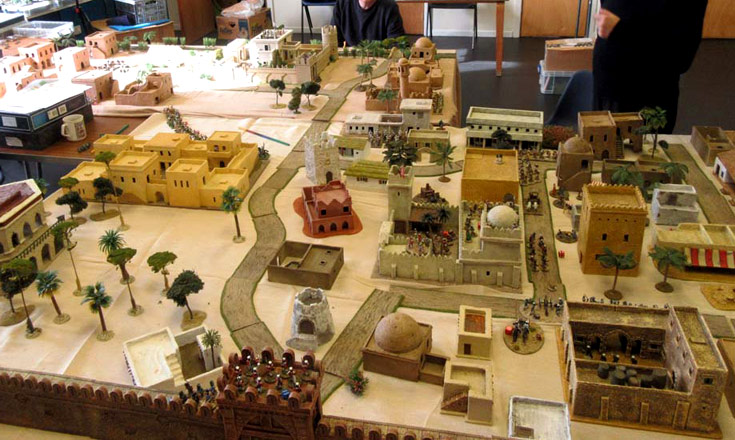 A weekend of Indian Mutiny wargaming isn’t complete without a beleaguered residency and a relief force struggling to reach it before the defences are overcome. That then, is exactly what this Sunday game was all about, played out during the latest League of Gentlemen Wargamers’ weekend up in Kirriemuir.

The town of Kirriepur had risen in revolt, and while the main British defences were centred on the residency (a superb model from Peter Nicholson’s collection), there were two other British pockets in the city, based around The Chummery (a large building that served as the Europeans’ club), and a residential area of bungalows, one of which was fortified. The Mutineers started in other parts of the city, while the local Nabob remained neutral – at least for the moment.

The table was taken up by this sprawling city, with the compound at one end and the city walls – looking a lot like those of Delhi – at the other end. That though, was only part of it. A second long table covered the route taken by the relief force. Along the way was a small British garrison at Dundii, a big mutineer stronghold at Forfara, and the palace of another neutral nabob at nearby Glamsi.

Just outside Kirriepur was Padanaram, a well-known thuggee stronghold, and another hotbed of mutineers. The job of the British was to join forces with the garrison, then press on up the road to relieve the beleaguered residency at Kirriepur.

On both tables the game began with the rival forces laying claim to their own base areas, a business that was slightly complicated by the presence of the two neutral nabobs. Would they declare for the British or for the mutineers? Until they chose sides, the other players gave them a healthily wide berth. On my table my mutineer stronghold of Forfara was very close to the Nabob of Glamsi’s palace, and so I had one eye on the approaching British and another on the Nabob’s private army.

Unfortunately any support I might have enjoyed from Dale’s mutineer’s at Padanaram was lost when Dale spent most of the game wandering up and down the Grand Trunk road, first bombarding the walls of Kirriepur with his obsolete large bombard, then wandering back towards Forfara and Glamsi, before being distracted by launching a band of badmash over the walls of Kirriepur, in an attempt to loot what they could. At least that’s what I thought they were planning – with Dale you can never quite tell!

Over in Kirriepur the British guarding the residency seemed strong enough to resist any threat for the moment, as the mutineers found it difficult to join forces. Instead they became embroiled in struggles with the two other British enclaves in the city, as both sides vied for control of the streets. Charles in The Chummery seized the walls and the main city gate, which of course meant that the mutineers would have problems reinforcing their factions in the city. The only external threat at the moment were the occasional shot from Dale’s bombard, and his threat to scale the walls (having found a stash of ladders).

Back on the road to Kirriepur Kevin’s British from the Dundii barracks had joined forces with Calum’s relief expedition, and together they advanced towards Glamsi. The Nabob wasn’t sure what side to team up with, but after a half-hearted advance against the British his infantry were charged by British cavalry, and so the die was cast. What followed was a prolonged struggle between Tom’s Nabob’s army and Kevin’s British, while Calum began an advance towards my stronghold at Forfara.  He launched a spirited cavalry charge, but after driving back some of my infantry he was countercharged by Tom’s fanatical guards, and swept from the field. the rest of the British cavalry unit fared badly too. After fighting some of my mutineer horsemen (below) to a standstill they found themselves shot to pieces by the defenders of Forfara.

Back in the city things were kicking off around the residency, with Colin and Bill’s mutineers circling the place, and overrunning the outer defences. the mutineers still didn’t have the strength to take the place though – all they could do was to get into a position where they could launch an all-out attack when reinforcements finally reached them. In fact, across Kirriepur the British were proving more resilient than anyone had anticipated.

That was the moment when the balance shifted. Dale had been making posturing attempts against the city walls, and while the bulk of his troops were now heading back to Padanaram and the fight against the relief column, a unit of badmash were busy trying to scale an undefended portion of the walls. Dale tried to do a deal with Chris, who was playing the part of the neutral nabob. Chris offered to help him over the walls and join forces, but Dale was untrustful and said as much. That was enough for Chris, who promptly declared for the British! That meant that for the first time the mutineers inside Kirriepur were not only outnumbered, but each faction was unable to support the other.

Back on The Grand Trunk Road Callum’s artillery had unlimbered and were busy bombarding the walls of Forfara. I had a cunning plan though. My battered cavalry unit had its morale bolstered by the mutineer commander, and then it was sent in a well-timed headlong charge against the battery. The guns didn’t get a chance to fire, and were duly overrun. After that Callum gave Forfara a wide berth, and the relief column snaked its way around the back of the hills and jungles between Dundii and Forfara, to support Kevin’s assault on Glamsi. By now the Nabob’s troops were in a bad way, despite the belated arrival of Dale’s reinforcements.

Back in the city the British did what they could to overpower the bands of mutineers, but while in some places the rebels were easily overcome, the detachments led by Colin and Bill proved more resilient, and saw off charges by Bengal Lancers, sneak attacks by the Nabob of Kirriepur’s private army, and patrols from Charles’ force based in The Chummery.

Things were now hotting up around Glamsi. The Nabob had lost his horsemen to a charge from British Volunteer Cavalry, but for a while a small unit of camel-mounted guns kept the Ferrengi at bay. Then though, the Nabob’s command elephant ( a gloriously camp pink affair, from Chris’ collection) found itself isolated by the British. That marked the beginning of the end for the independent state of Glamsi…

My own mutineers from Forfara sortied from their fort to lend what succour they could, as did Dale’s wandering mutineer force, but it was all too little, too late. The Nabob went down amid a flurry of British steel and lead – shot from the front by a unit of Highlanders, then charged from the rear by the Volunteer Horse.

By now there were British units everywhere, and while tom’s demoralised troops fled back to the walls of Glamsi, Kevin and Callum began marching their troops around the back of the palace, and so on towards Padanaram.  While we still blocked The Grand Trunk Road at Glamsi, the British cunningly avoided us by launching this flank march. There was nothing we mutineers could do to stop them, as they were out of reach of our force.

Back in Kirriepur Dale’s unit of ladder-carrying badmash were wiped out by Charles’ Highlanders, so ending the last serious threat to the residential bungalow area. By now the British were gaining a clear assendancy in that part of the city, as armed units of civilian vigilantes (below) scoured the streets for any last groups of mutineers who hadn’t fled the area.

In the picture below Chris’ palace fairly dominates a large swathe of the town – that’s it he’s moving a patrol out of. Everywhere between it and the gate was in British control, which allowed Chris and Charles to begin encroaching on the mutineer’s cordon around the city’s mosque. By then The Chummery was no longer threatened by Colin’s mutineers based in the town’s main marketplace, as they were busy preparing for a last-ditch assault on the walls of the residency.

So, that was the situation. Kirriepur was pretty much in British hands, although Colin and Bill still threatened the residency from two sides, and cut it off from the rest of the British-held city. On the Grand trunk Road the relief column was also making progress, and while Forfara and Glamsi still remained in mutineer hands, and a large mutineer army straddled the road in the ground between the two places, the British were simply bypassing it, and continuing their march on Kirriepur.

We were also running out of time. With the clock hands creeping closer to packing up time, Colin and Bill decided to throw caution to the wind and launched their last-ditch attempt to subdue the residency. Mutineers stormed the walls from three sides, and at one point they actually made it over the walls. However the defenders were too well entrenched, too numerous and too well-organised. In the end all of these unsupported attacks were repulsed – even the one shown below, launched from the canal bank against the weakest part of the defences, held by armed civilians. So the game came to an end, with the residency still holding out, and the British in the ascendancy.

Not surprisingly the game was declared a British victory. My hat gets tipped to Peter Nicholson for organising such a splendid mega-game, and to Kevin for producing rules that worked so smoothly. Essentially they were his American Civil War rules which had been tweaked for the occasion, but they did the job perfectly. The whole thing was a real wargaming joy – it looked good, the company was great and the experience was one to remember.