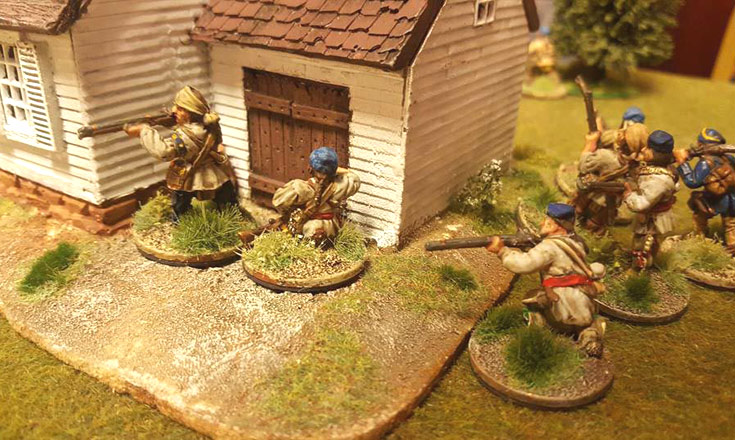 We hadn’t done played a French & Indian Wars game for a while, and so we decided to give it a go. As usual this was a multi-player affair, with three players a side – Dougie, Bart and I playing the British, and Peter, Campbell and German Michael the French and their Indian allies. this was a “Raid” scenario – to win the French attackers had to destroy all of the four buildings on the table. The British were there to stop them. We played the game on a 6×4 foot table, with the scattered North Valley hamlet in the centre of the table, with woods all around its periphery.

Peter and Michael entered the table on one short end with a horde of Huron Indians and a unit of Coureur de Bois, while Campbell led his militia on the other short edge. they though,m were backed up by a unit of Troupes de la Marine. For their part the British came on on the centre of the two long ends, guaranteeing they’d be in the middle of the scrap.

Dougie had three units of regulars (one highlanders, one line and one lights), while Bart had three – one of grenadiers, one of rangers and the other of Provincial troops. My unarmed female settlers headed for the safety of the church, while their menfolk formed themselves into two small units, to defend their families to the last.

Due to a lack of numbers we had to bring the Indians on in two waves – the first of four units, the second of three. So, the players were ready, the troops were deployed, the cards were shuffled, and the stage was set for our little scrap in Vandalia County’s North Valley.

Actually, things went badly for the French from the start. Campbell managed to set fire to one of the buildings, but then his Marines didn’t move for the next two turns, leaving his militia outgunned and outnumbered. In Muskets & Tomahawks, you activate when the card for your troop type is drawn. However, to spice things up we put an end of turn card in there. Once it gets drawn then all the cards are reshuffled, and you start again, whether you’ve moved or not. Campbell’s French regulars always seemed to be at the bottom of the pack!

Dougie and peter played a fairly aggressive game from the start. A unit of my armed settlers tried to hold of the advancing Indians with long-range musketry. As they were in the open and the Indians were hiding behind trees this didn’t work to well. The return fire all but wiped me out. Fortunately Dougie’s Highlanders came to their aid, led by Captain McKipper of the 42nd. As the Indians emerged from the trees the Highlanders raced round a building and charged into them. Both sides took casualties, but by the end of the scrap the Indians were broken, and the survivors fled back into the forest.

Seeing this, Michael decided to emulate the move by charging Bart’s grenadiers. Two units of Indians emerged from the forest -only to be met by the grenadier’s volley fire at close range. Bart had formed them into a firing line – in fact he formed his whole force into a big square – and he simply blazed away. What remained of Michael’s Indians broke and ran. Oh, all apart for one unit. Michael’s Indian leader figure promptly headed off the table, accompanied by his one remaining unit. Why? All would be revealed at the end.

Meanwhile, Campbell’s Militia de Quebec were in action. The one unit that set fire to the building then took up a firing position in the woods, where they were joined by their companions. Their fire began whittling away the Provincial unit, and eventually it forced a reaction test. Bart rolled a “1” and the colonials duly ran away. That removed  one face of Bart’s square. By now Campbell’s regulars – his Marines – were n the move again, and soon both the militia and the tardy Marines were sniping at the British grenadiers.

Back on the far side of the table McKipper had led his men into the forest in pursuit, only to run into the Indian second wave coming the other way. He and his men were duly cut down, and the woman accompanying the captain was taken prisoner. Why was she there? All would be revealed.

Back in the Grenadier’s firing line they were now taking fire from the second wave of Indians from one side and the Marines and French militia from the other. Eventually they retired into the edge of the trees, accompanied by the small unit of rangers. There Bart’s much depleted force hung out for the rest of the game. In the centre of the table my armed settlers had fought off an Indian attack on the church, and after that they weren’t threatened again.

Then though, another unit of second wave Indians under Campbell’s control had set fire to the inn. They were charged and driven off by the British light infantry, which is where we ended the game. The Indians were still lurking in the forest, sniping away, and the militia and French regulars ruled the roost in their patch of the table. however, the British now controlled two of the four buildings, which meant the French had failed to win put the valley to the torch. So, a British win… or so we thought…

We still had to take into account the sub plots. At the start of the game, everyone draws a chit with a sub plot written on it. If they achieve it, they can turn a win into a draw, or vice versa. Michael, not surprisingly, was to make sure he and his prize unit survived the game. He managed this by leading it off the battlefield! Campbell had the opposite problem – an awkward unit of militia he wanted to get rid of by getting them killed. I think he did it – I suspect it was the small unit of Indians that set fire to the Inn – and which was promptly chopped up by a much larger unit of British light infantry.

Dougie had to make sure his female charge survived. Nope – when McKipper was killed, she fell into the clutches of Chief Dripping Beaver. Bart didn’t get his – whatever it was, and I didn’t get mine, which was to  kill an enemy leader in hand-to-hand combat. I got killed to early on for that! I think Peter’s sub-plot was something involving close combat, which he achieved by sticking a tomahawk into the head of Captain McKipper.So, that meant that the French players had all achieved their sub plots, while none of the British players achieved theirs. that then, turned what was otherwise a British victory back into a hard-fought draw. All very silly – but also thoroughly entertaining!