We settled on a Napoleonic game this week, but it had to be a fairly small one, as we’re still playing on a 6×4 foot table in my kitchen parlour. The scenario was adapted from one in the late Stuart Asquith’s Scenarios for All Ages, but as his was geared up for a larger table, then we scaled everything back a bit, and dropped his special rules covering getting lost in the woods. We set it during the Spring 1813 campaign, south of Bautzen, with the French and Allies on one side and the Russians on the other. This was all about getting to the small village of Klein-Künitz before the other guys – and then holding it until the end of the game. This of course, wasn’t going to be straightforward, as terrain and the enemy presented both sides with a few challenges. 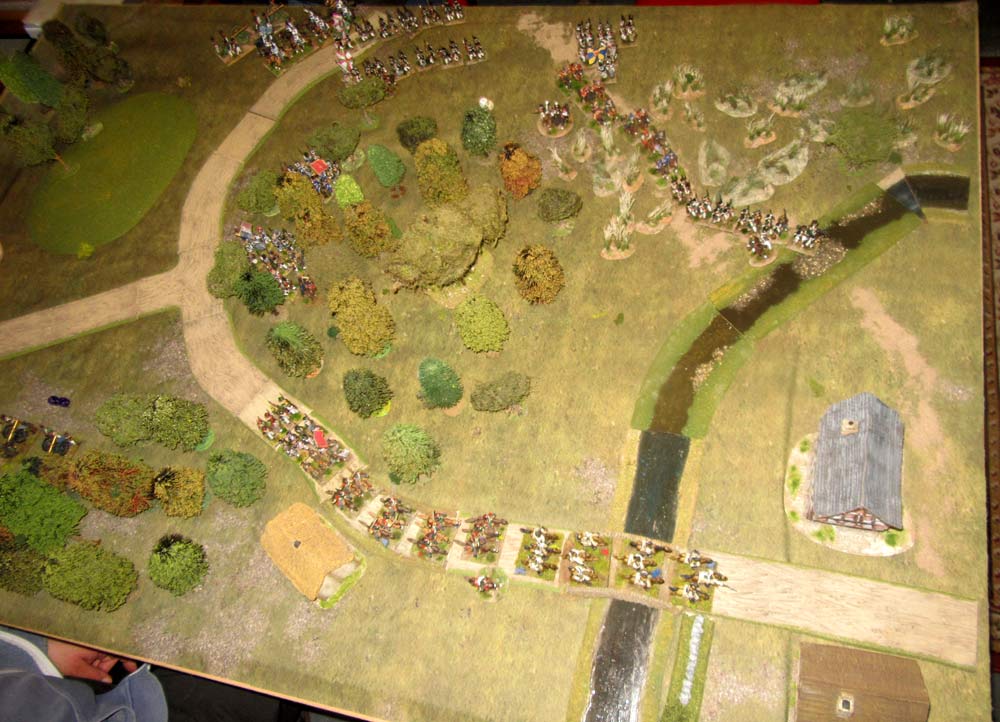 The forces were fairly balanced, with six tor seven units a side. The Allies had two regiments of Saxon horse, and four battalions of French infantry, backed up by a Saxon battery. The Russians had five battalions of infantry, a cavalry regiment and a gun battery, plus the ubiquitous sotnia of Cossacks. The pace of the game would be dictated by the terrain. A road ran to the village from the French short (western) table edge, but this was intersected by a road running up from the north. Also, the village lay beyond a river, which was crossed by a road bridge, and also by a ford to the north, reached by way of a track through marshy reed beds. The centre of the table though, was dominated by the Küntzwald, a large wood which was impassable to cavalry. 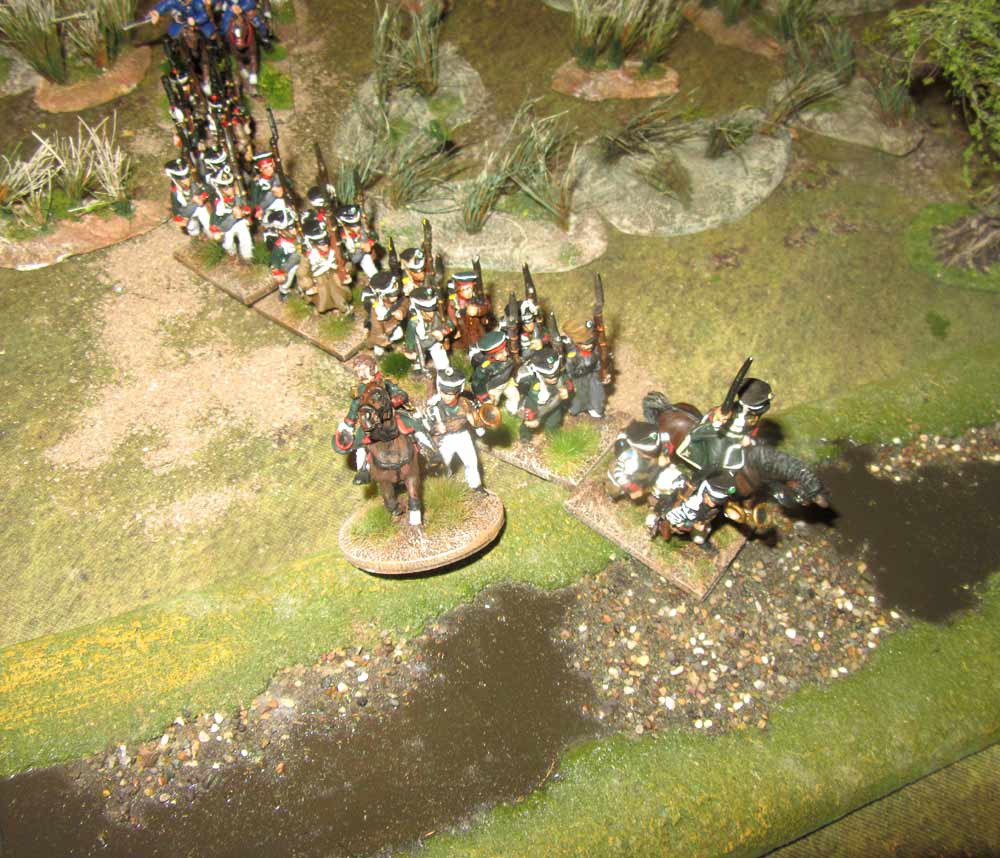 The French and Allies were played by Gyles and Lindsay, while Mally and I commanded the Russians. The Allies got to go first, and opted for a high-speed drive up the road up by the Saxon cavalry, while the French infantry and the guns covered the road curving up from the south. The Russians split their forces too, with me sending two battalions and the Cossacks up the trail through the reed beds towards the village, while Mally took on the French. So, both sides had opted for the same basic stratagem.

Surprisingly, both the leading Russian jaeger battalion and the Saxon cuirassier regiment crossed the river in front of the village at the same time. The Saxons tried to launch a charge, but as they were still in march column and the enemy were some distance away this didn’t work out. Still, it forced the jaegers into square, which stopped their race for the village. The next turn though, the cuirassiers were fired on by the square, and took a hit. Gyles pulled them back to rally. 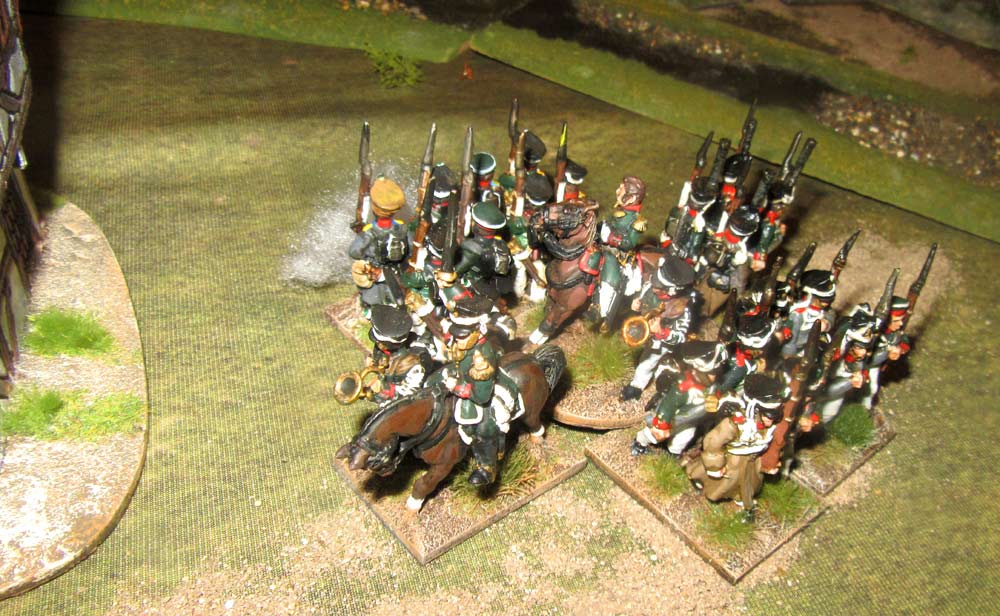 That was when my jaegers made their move. A brigadier was with them – the commander of the racing column – and he did a “follow me” order. That gave him three moves, which he used to come out of square and race for the cover of the nearest building. That meant the Russians had a foothold in Klein-Künitz. Then, disaster struck. The next unit in the column was the Sotnia of Cossacks. They tried to guard the ford, but they were spotted by the regiment of Saxon cheveaux-legers, who charged them. The Cossacks tried to fight rather than evade, and it ended badly. They were shaken – three hits, and forced to retire back along the winding path through the reed beds. The Saxon cavalry then took up position at the northern end of the path, blocking the Russian route to the village. 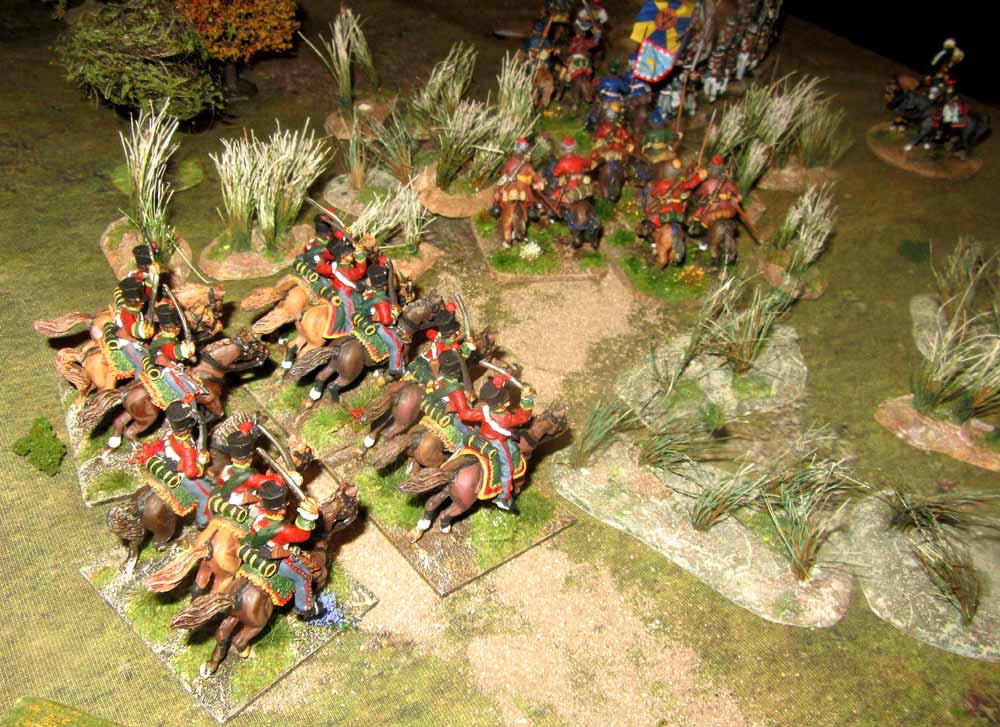 Over on the west, two of Lindsay’s infantry battalions deployed in the woods, to protect the Allied flank. The Russians responded by unlimbering their guns, and sending two battalions of their own to contest the Allied control of the Küntzwald. Meanwhile the Russian cavalry – a regiment of cuirassiers – headed around the back of the guns, and up onto a low hill which dominated that side of the battlefield. That though, brought them within line of sight of the Saxon guns, who began firing at them. 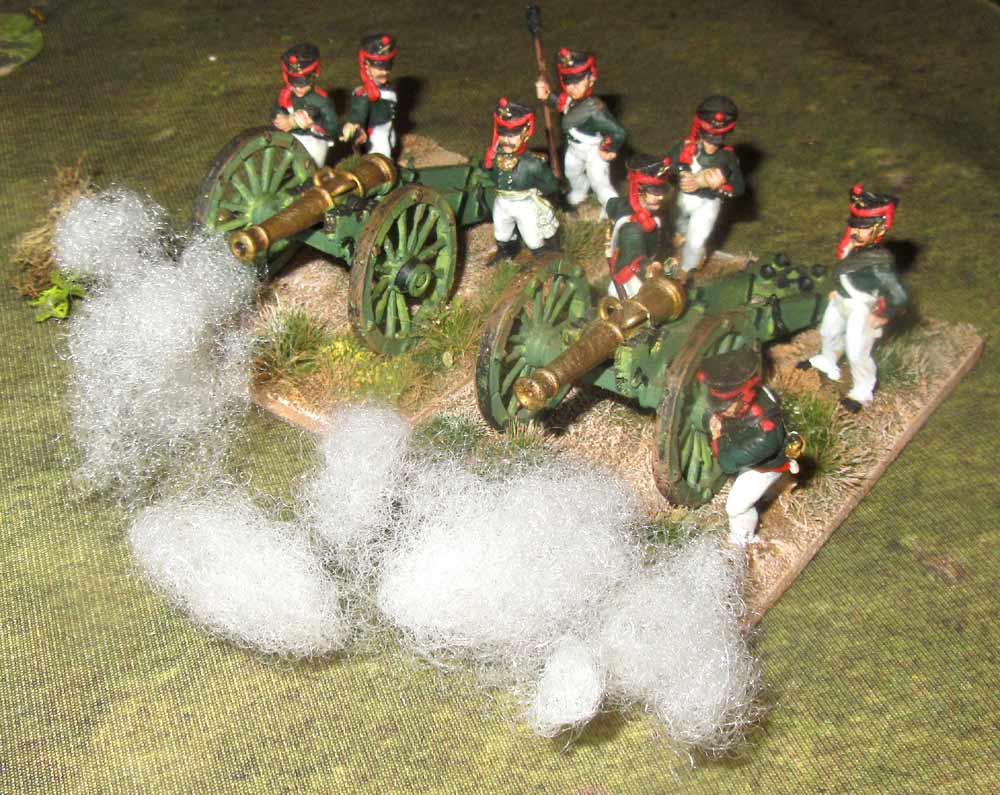 The infantry fight in the woods began fairly well for the French – the opening volley of one of the two infantry battalions there managed to score three hits on a Russian battalion, shaking it and stopping it in their tracks. However, the second French battalion had turned to face west, to support the Saxon guns and to fire on the Russian cuirassiers. So, at the edge of the Küntzwald the French battalion there was outnumbered two to one. 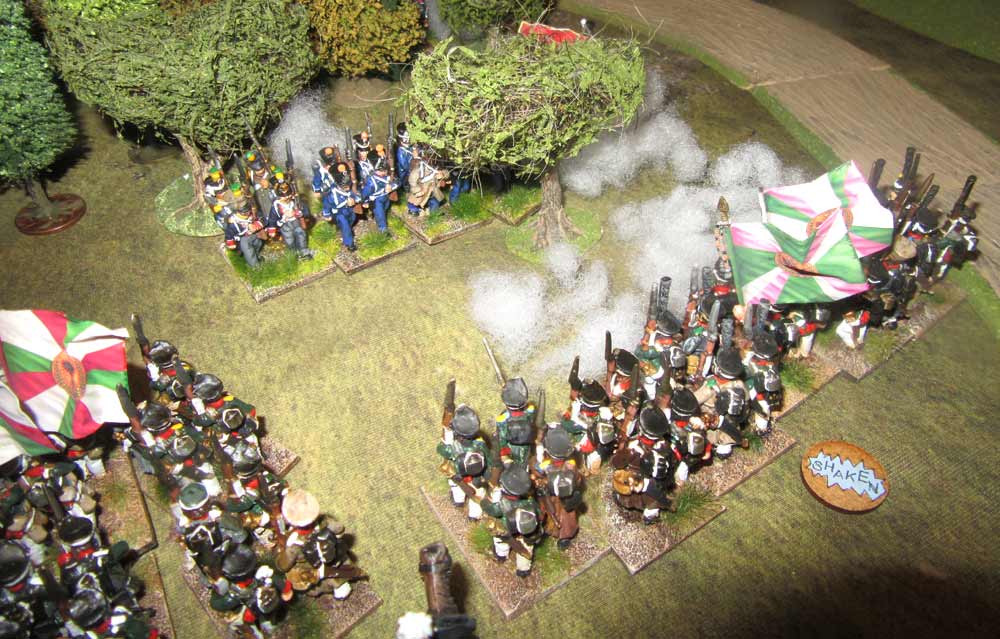 The second Russian battalion formed into an assault column and advanced into the woods, trying to flank the French defenders. Meanwhile the guns pounded away at the French battalions, chipping away at it, as did the other Russian battalion, which was still shaken, but firing in line. The French light battalion taking the punishment was eventually shaken too, having acquired three hits.

Over on the hill the Russian cuirassiers were now being fired on by infantry and artillery. So, Mally chose the only possible course for a true cavalryman – charge the guns! With a double move he got there, but still had to take the gun’s point-blank closing fire. This caused two hits, which together with one from the French infantry earned them a shaken marker. Still, it wasn’t enough to stop the charge. The result was fairly cut and dried. The guns were overrun, the gunners cut down, and the battered but victorious Russian cavalry rode on out of range of the infantry in the Küntzwald, to give them a chance to rally and reform. 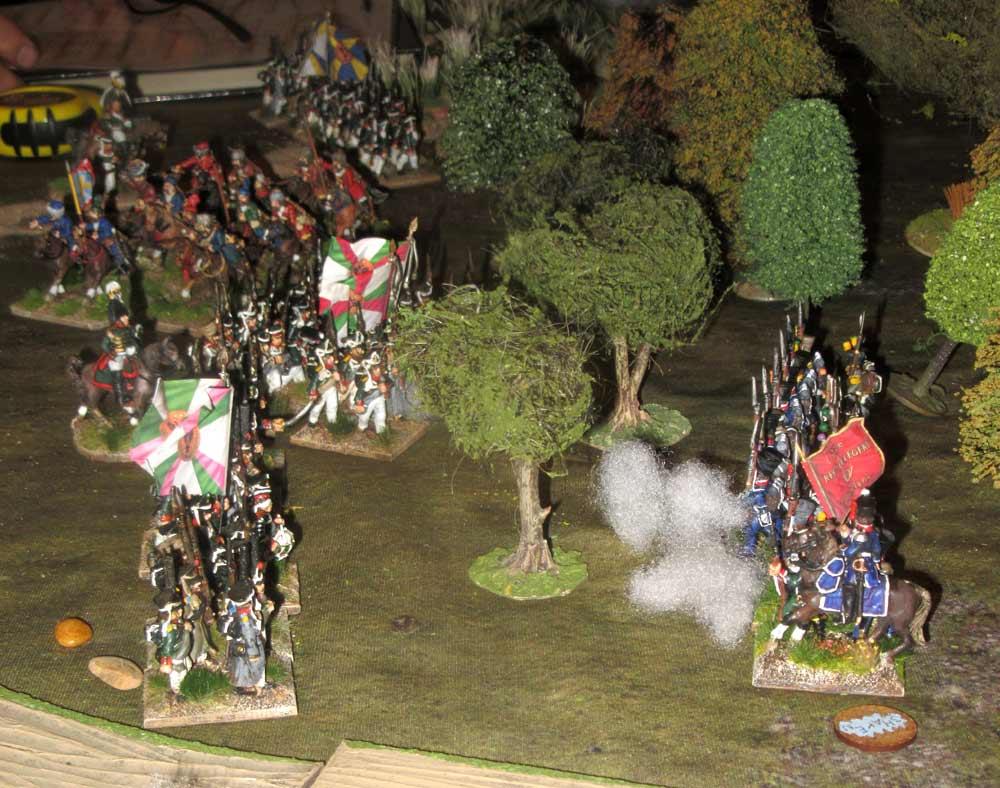 Back in the Küntzwald the French light infantry tried their best to hold off their attackers, first by stepping back a bit to avoid being outflanked, and then when the Russians charged them, they disordered the chargers with closing fire, and therefore lived to fight another day. Effectively, they’d occupied the attention of two Russians infantry battalions and a gun battery, and although badly battered, they were still in the fight. They were also now on their own too, as the second French battalion had moved off, taking up a blocking position astride the road leading to the village. The aim, of course, was to prevent the cuirassiers from using the road. 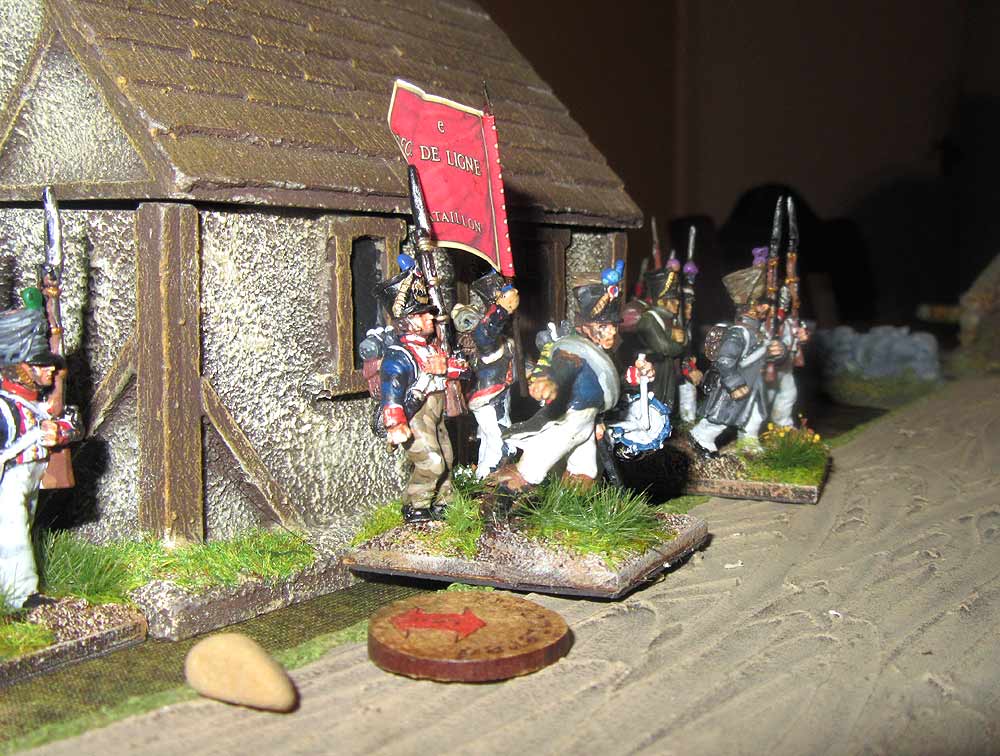 Over in Klein-Künitz a French infantry battalion had arrived, but was immediately disordered by fire coming from the Russian jaegers in the building. Lindsay wanted to charge the Russians, but being disordered she couldn’t. Instead she pulled back into the other building, where she could wait for help. Meanwhile Gyles had moved his Saxon cuirassiers past the Russian-occupied building, to screen the ford. Effectively that meant that the only way the Russians would reach Klein-Künitz was along the road to the west. 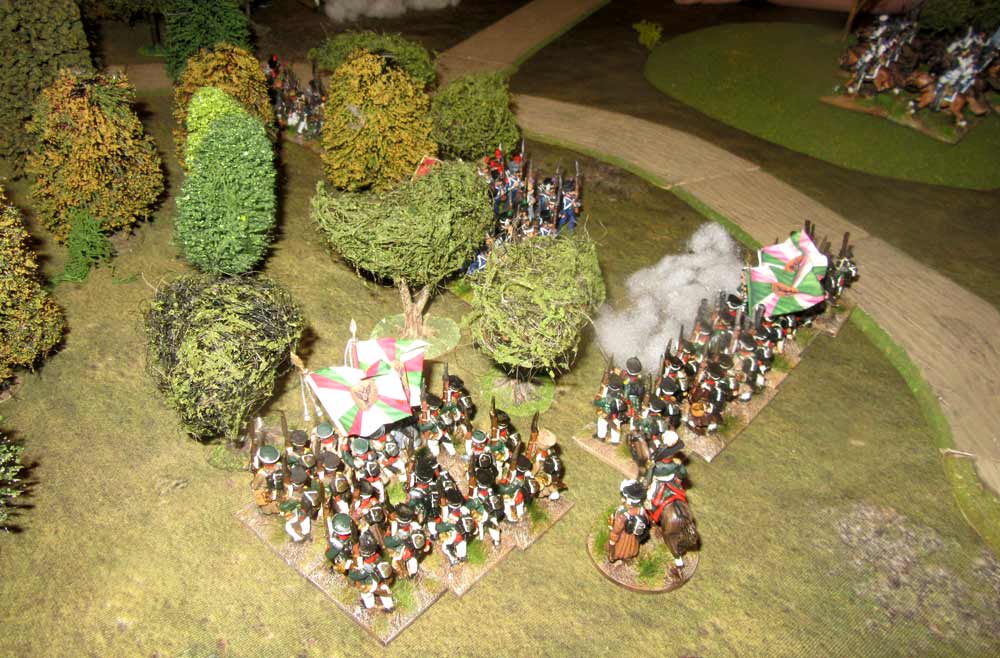 We were now running out of time – it was getting late, and people had to drive home. So, we called it a night. As both sides had units in the village the game was declared a draw. The Russians had done well in establishing themselves in Klein-Künitz and overrunning the Saxon guns. Although the Allies hadn’t destroyed any Russian units they also had troops in the village, and were denying the Russians access to it. Of course if the game had gone on things might have changed – the sole French battalion in the Küntzwald was on the ropes, and the Russians now had a mixed force gathered to drive eastwards up the Klein-Künitz road. Still, that would all take more time than we had, and all things considered a draw was a pretty fair result. It was also a very entertaining little game!