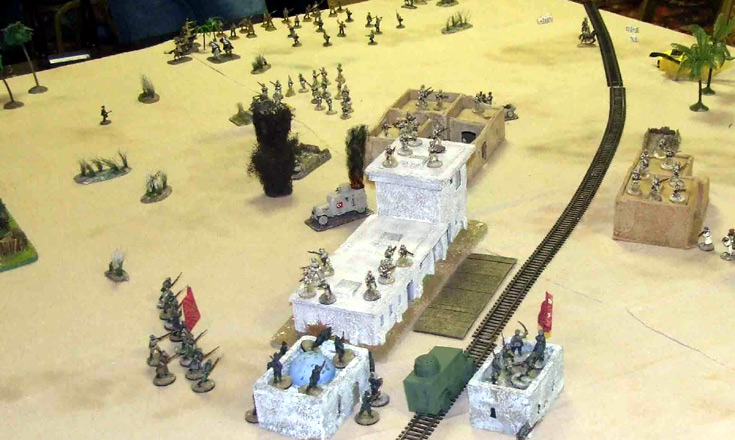 We hadn’t played a Back of Beyond game for almost a year, partly because the campaign organiser Colin Jack was wrapped up in his fictitious “A Very British Civil War”. In the “BoB” campaign the Turks landed on the eastern shores of the Caspian Sea, and had advanced as far as Merv, near Bokhara, where they were busy forming a Muslim League, involving all of their co-religionists in that little corner of Central Asia.

So far they had fought off the Reds, the Whites and even the British, so clearly they were due their come-uppance. The cunning Bolsheviks transported a large, well-armed raiding force across the Aral Sea, then marched them across the wastes of the Kyzyl Kum to fall upon the Turkish supply lines in the fertile valley of the Amu Darya River. Their plan was to cut the Turkmenistan railway at Nukus near Azhkebad, well to the rear of the main Turkish army. The town was defended by a Turkish brigade, backed up by allies in the pay of the Emir of Bokhara.

The Bolsheviks launched a surprisingly well-coordinated assault from the north, with the main infantry assault on the town supported by an armoured car, while the cavalry tried to sweep around the Turkish right flank, to the east of the town. The Bolsheviks ground their way forward, and the fighting soon became a bitterly-contested house-to-house affair, with both sides taking heavy casualties. The Emir of Bokhara’s  Guard backed by irregulars put up a brave show to the west of the town, but they seemed suspiciously content to hold their ground, and let the Turks and Reds fight it out between themselves.

Meanwhile the outnumbered Turkish cavalry were bested by their Bolshevik counterparts, but the cavalry sweep eventually fell foul of rifle and machine gun fire. The Bolsheviks did score a minor success though when they knocked out a Turkish armoured car, which left the Bolshevik one ruling the roost in the town. The other duel of technology was fought out in the air. Both sides had air support, and the two planes fought a duel in the skies over Nukus – one that eventually ended with the Red plane crashing and burning on the outskirts of the town. That left the Turkish Fokker free to strafe the Bolsheviks, and generally make a nuisance of itself.

With darkness closing it it was becoming clear that the assault was running out of steam. Reluctantly the Bolshevik commander decided to withdraw, with the armoured car making sure the Turks wouldn’t pursue. In fact they were too battered and bloodied to go anywhere.

Therefore, the Turks – or rather the Muslim League – still held the railway line, but the Bolsheviks showed a lot more spirit than they had in past games, so no doubt they’ll be back! As with all our Back of Beyond games the rules we used were the fast and bloody Contemptible Little Armies set by Chis Peers, and their Back of Beyond supplement. All these games are great fun, with lots of period flavour, and everyone thoroughly enjoyed themselves.