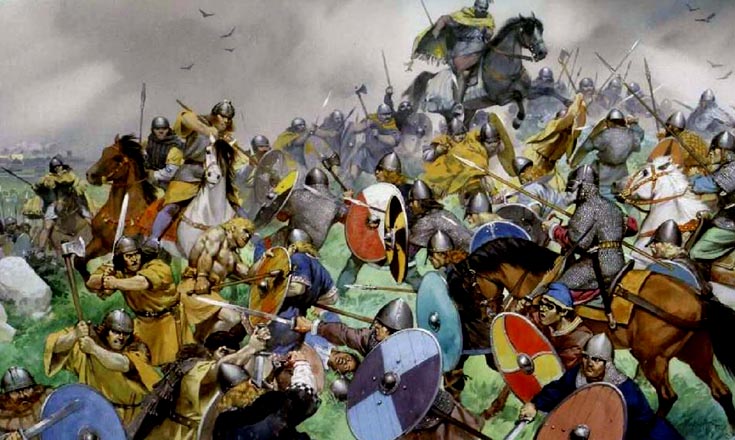 I wasn’t sure what to call this period. Ideas were “Medieval”, “Early Medieval”, “Late Viking” or “The Norse Age”, but not of these really fitted the bill. In the end I opted for the catch-all of “The Dark Ages”. I know it’s academically out of date, but for wargamers its got more resonance than any of these others.

You see, this army began life as a small Viking force, designed to be used with Saga – the Dark Age skirmish rules. We played a lot of Saga a few years ago, but then it rather fell into abeyance, and the figures languished at the back of my lead closet. I spend a lot of time up in Orkney – I come from the islands – and recently the guys in the Orkney club have been playing a lot of Saga. So, I decided to resurrect my army for my visits north. I also had a pair of Arthurian and Saxon warbands, which I’ve played a few games with, but ultimately got bored with, and then sold. That still leaves me with my Orkney Vikings though.

I already had enough figures for four army points – that means four units, and a total of a couple of  dozen figures or so. That wasn’t much, especially as two of the units were small ones – just four figures apiece. however, my “warlord” was based on a historic figure – Sigurd the Stout, Earl of Orkney. He was the one with the famous Raven Banner. As the legend goes (recounted in the Orkneyinga Saga), as long as the magical banner is being flown the earl will win his battle. the drawback was that the standard bearer would always get killed. In the end, at the Battle of Clontarf (1014), Sigurd ran out of willing standard bearers, and so picked it up himself. That, of course, was the end of him.

Recently, in the Edinburgh club, Saga gave way to Lion Rampant, and thanks to the influence of club member Dave Imrie people began building 14th century medieval armies. So, I bought some gallowglass figures and Highland archers from Dave’s company Claymore Castings, but I never did anything with them. Then, during a visit to Orkney, I had the idea of merging the two armies. After all, the Viking Age ran from the late 8th century until the late 11th century. By its end, the Earls of Orkney – Sigurd and his successors – had extended their influence southwards to incorporate Sudreyjar – the south Isles – now confusingly known as the Western Isles,  as well as large swathes of the Highlands and the North-East of Scotland. This “golden age” for Orkney lasted until well into the 12th century. This was the period covered in The Orkneyinga Saga – that page-turning account of the exploits of the Earls of Orkney. This golden age waned but lingered on until the late 13th century, when King Haakon of Norway’s defeat at the Battle of Largs (1263) brought it to an abrupt end.

So, my army would be a small Viking one, augmented by slightly later but still perfectly compatible figures, making it suitable for this whole period. With the addition of a few mounted knights and crossbowmen it can even be extended into a Scandinavian army of the 14th century. So, one army fits all. I’ve used it a few times, and it seems its main opponent seems to be Normans – either pure Normans, or their German Ottonian successors, or even Normans in the service of the King of Scots. I’m not sure where else this army can go – but I’m sure that with very little in the way of modification it’ll be perfect for a raiding force of the Post-Norse Earls of Orkney, who ruled the islands in the name of Norway until the mid 15th century.  So, Orkneyinga – one saga – and a multi-faceted army!