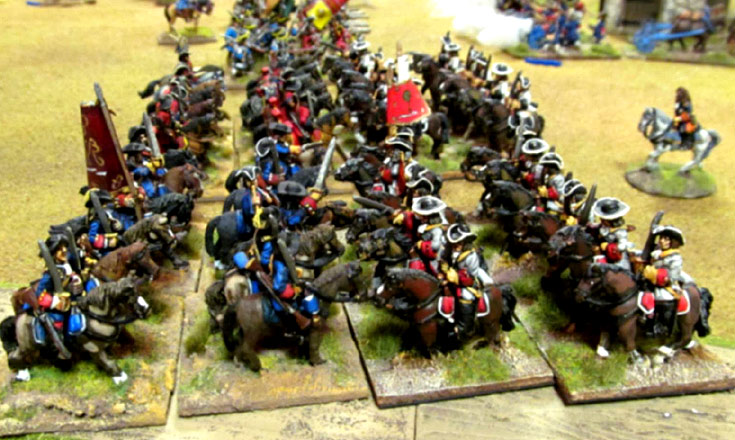 Misc., The War of the Grand Alliance, Pike & Shotte, 28mm

There actually is a place called Silly in Flanders, to the south-east of Brussels, near the town of Ath. Anyway, it seemed like a good name for this fictitious little battle. We played it to try out Warlord’s Pike & Shotte for the War of the Grand Alliance. I’ve already used the rules for the English Civil War, and they worked well. I was hoping that they’d also perform well for games set at the very end of the age of pikes.

In this game, fought out between the French and the Dutch, Chris Henry supplied the army of the Sun King, while I brought along the troops of King William I (“Good King Billy”). We hadn’t used these armies in a few years, and we’d recently both rebased them slightly, integrating our pike companies into our command bases. We both felt this looked a lot better than having the pikes kicking around in a separate base stuck behind the rest of the battalion. We both had similar-sized forces – 8 French and 9 Dutch foot battalions, and 4 regiments of horse, plus four guns.

To keep things simple we classed Chris’ Cuirassiers du Roi as line cavalry, and did the same for his dragoons. The French cavalry still have an qualitative edge over the Dutch horse, but we wanted to keep things simple. Also, to make it interesting, one of my three-battalion brigades of foot started the game off the table, and was still marching towards the battlefield when the French began their attack. That meant they had 8 battalions in the field, while the Dutch defenders had 6.

The musket range in Pike & Shotte is 18 inches, so both sides began shooting at each other at fairly long range. The French then halted and relied on firepower to soften up the Dutch line before they charged home. This worked both ways – over on the French left, in front of the village of Silly, a battalion of Wild Geese found itself fired on by a Danish regiment and a Scottish one – both in Dutch pay. Eventually the Irishmen of Dillon’s regiment failed their break test and fled the field. That was when things started to go wrong. The French cavalry on their right wing edged forward, through the hamlet of Gilbecq, and charged their Dutch counterparts.

Amazingly the Dutch forced the French Cuirassiers du Roi to retire, while the French dragoons did the same to the Dutch Hesse-Homburg horse. In the next round both sides charged again, and this time my luck failed – both Dutch units were chopped up by the French, and the survivors fled the field. As if this wasn’t enough the French then dragoons then lined up on the flank of a Dutch gun battery, ready to charge it the following turn.

By that time the Dutch reinforcements had appeared, and began marching down the table edge to shore up the flagging Dutch left wing. Meanwhile the French infantry began closing in, stopping again at close range to renew the firefight. One Swiss battalion in Dutch service broke under the pressure, forcing the brigadier to commit his only reserve to shore up the line. That was when the French dragoons charged home into the gun battery. Surprisingly the gunners stood their ground – at least for a turn. This bought enough time for the unengaged gun in the two gun battery to limber up and escape. The rest of the battery went down in a welter of dust and hooves. One last piece of good fortune for my Dutch came when a second French unit – or rather another Irish one – failed its “break test” and fled. By then though, my outnumbered and thinly stretched line was in poor shape, with many of the units “shaken”, “disordered” or both. All that was left was for the French infantry to charge home, and victory would be theirs.

Instead, Chris got sneaky. Taking the advice of the umpire Bill Gilchrist he attached his cavalry brigadier to the Cuirassiers du Roi, and made a “Follow Me” move. He charged round the back of the Dutch line to smack into the head of my column of reinforcements. They were still in march column, as I’d just failed the command roll I needed to form them up into line. The result was inevitable. The Dutch battalion retired, allowing the French to make an exploitation move. They then repeated the performance with the battalion behind them. At that crucial juncture Bill had to leave, so Chris and I decided to call it a day. The game was shaping up to be a spectacular French victory, and by the end of it I’d have been lucky to escape with very much of my army. Despite being handed a good kicking I enjoyed the game, and as Chris said it was a rare combination – a game that looked good, and was great fun to play. Pike & Shotte gets a big thumbs up.