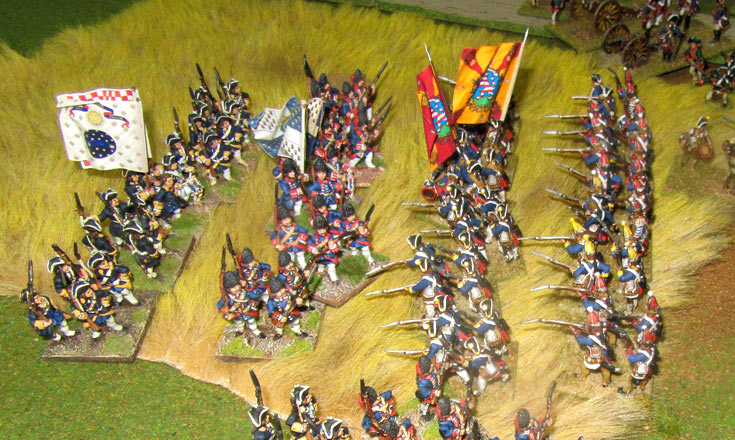 I missed last Thursday’s club night game due to a book launch (not one of mine though), and I’ll miss the next two Thursdays as I’ll be in Florida. So, I grabbed the chance to fit in a Sunday game at the club. Michael Schneider brought along his Hessians, and we augmented them with some Hanovarian and Prussian cavalry, and a British foot battalion. I turned up with my French, and we deployed for a simple battle, with no frilly bits like objectives, rivers or towns to complicate things. As this was primarily a rules test, I wanted things to be as straightforward as possible.

So, Michael set up on one long side of a fairly open 8×6 foot table, and I set up facing him. We both had 10 infantry battalions, in three brigades, each with an attached artillery battery. We both had two brigades of cavalry, too, the French with three regiments, and the Hanovarians with two apiece. Both sides also had a unit of light infantry skirmishers. So, apart from a slight edge in French cavalry, and the Hanovarians having one larger gun battery, we were fairly evenly-matched. Campbell commanded the French, Michael the Hessians, while I umpired, and tinkered with the rules.

Now, I’m busy revamping my Die Kriegskunst rules, and one of the changes was in the way orders and command works. We shamelessly looted the ADC system from General d’Armee, but then modified it to better suit the period, and our needs. So, for every brigade in your army (we both had five), you get a Staff Order. That represents an order to do something specific, like moving a bit further, launching a charge, bolstering your artillery fire, recovering casualties or adding a little to your melee score.

You allocate these points in the command phase, and then see if your brigades are actually in command. If not, and you spent the staff points, you could get a re-roll. Otherwise your brigade stays put, awaiting fresh orders that never arrived. The aim, of course, is to allow commanders to “rev up” their units at their schwerpunkt – the critical part of the battlefield. It replaces the old order system in Die Kriegskust 1, which was quite fiddly, and slow to administer. This is quicker, simpler, and forces the commanders to think more clearly about what they really want to do.

In our game, both sides began by opening up with their guns, and advancing their battle lines towards each other. On the right, Campbell sent his skirmishers across the wooded hill on the right side of the battlefield, and advanced his cavalry brigade in a big deep column. He also sent a four battalion infantry brigade up in support, which meant that this was the side of the field where things were going to happen first. On the left he advanced to form a solid line, but held back slightly. By contrast Michael started using Staff points to move his cavalry from his left flank to reinforce those on the right.

That would give him a local superiority, but it also stripped the Hessian left flank of any cavalry support. The fighting proper began with a general exchange of musketry on the French right and Hessian left, and an exchange of artillery fire. I’d temporarily dropped the “bounce through” rule, to see how much it slowed things down, and I immediately regretted it, as both Campbell and Michael stacked their infantry battalions up one behind the other. Still, the musketry system worked well, with both sides using up their first fire bonuses (a +1), and kept on trading volleys. In DKK 2 everyone fires on the “standard battalion” line, unless they the units were especially large or small, and we didn’t have any of those apart from the skirmishers, who have their own firing system anyway, just like in the old rules.

Then, Campbell launched a couple of what seemed fairly rash charges. Both targets were infantry battalions, in good order. It seemed suicidal, and in one case the attackers were stopped dead by infantry fire. In the other the closing fire was risible, and so not only did the infantry attackers charge home, but a unit of French hussars joined in the attack too. In the first case the attacking French grenadiers halted and returned fire, but in the other the Hessian defenders were ridden down and lifted off the table. First blood to the French!

Over on the wooded hill, those French skirmishers-  the Chasseurs de Fisher – had emerged from the woods on the hill, and began firing into the flank of the large Hessian artillery battery in the hilltop clearing beyond. The artillery became disordered (again thanks to a bad die roll), and that meant that next turn the skirmishers could charge in. this they did, capturing the guns in the process. Right in front of therm was a British line battalion, and as it was part of a brigade that had lost half its units (the guns and the Hessian battalion) it Faltered. That made it vulnerable, and Campbell gleefully followed up with a French cavalry charge, which swept the British battalion – the 21st Foot – from the field. So, on their right flank the French seemed on a roll.

Things were hotting up on the other side of the table too. The French finally advanced their left-flank cavalry brigade, and launched a charge. The Hanovarian horse counter-charged, and both sides hurt each other, and had to retire behind their lines to reform, but it was the French who  got the worst of the scrap. It would take Campbell a couple of turns to redress his units, and meanwhile the other Allied cavalry brigade (all British and Prussian horsemen) had come up behind their Hanovarian pals. So, things were starting to look less than rosy for the French on their left.

Just before the clash Bart arrived, and so it was he that fought the French cavalry to a standstill. I duly started to help Campbell out, but messed up almost immediately. I launched my third un-engaged French cavalry unit at a unit of disordered Hanoverian horse, and caught them at the halt. What promised to be an easy victory though, was thwarted by some extreme die rolling. Bart not only held his ground, but sent my cavalrymen fleeing from the field. My brigade duly faltered (more than half its three cavalry were retiring or routing), and so the unit was lifted off the table. That meant we now had a hole in our line, and had two battered cavalry regiments to face off against four Allied ones.

In the centre the two sides had kept on exchanging fire, and bringing their guns forward in support. Although heated, this firefight never really decided much, apart from being an enjoyable way to tie down the enemy centre. You see, both Campbell and Michael were making their play on their right flanks, and those stratagems were starting to bear fruit. On both sides of the table, the defenders were in poor shape on their left flank. In fact, in the case of the Hessians, the left had pretty much been swept away.

That though, was pretty much where we stopped it. By now both sides had lost two units – two Allied infantry battalions and two French cavalry regiments (as one of Campbell’s failed its test and routed from the field. The Allies also lost their gun battery. All in all though, we decided the game was a draw, which seemed to suit everyone. Apart from German Michael though, who spent the whole day whining. We should now call him “Rhine Whine”! We could have played it to a conclusion, but being a Sunday people had to get home to dinner, or to walk the dog or whatever.  So, we called it a day, even though both sides had a good shot at winning if we played it through.The main thing though was that we confirmed the game mechanics worked really well, particularly the new Staff order system, and the firing. “Rhine Whine” will disagree though as he only really likes Black Powder. We still  want to tinker a fair bit with charges and melee,  but things are really taking shape. In the Spring, we’ll start opening up the playtesting to others, and then we’ll really test things out. Until then, the tinkering continues!