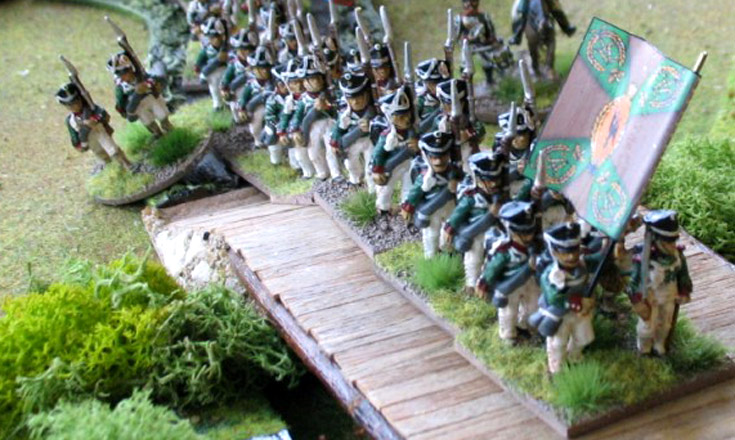 With Angus down in London, this review – and game – is brought to you by Bill Gilchrist; This weeks game was the Battle of Perekrjostok, a purely fictional action set somewhere on the northern flank of the Grand Armée during its invasion of Russia in 1812. It was played out using the ever-reliable Black Powder rules, and it was a game with a twist at the end – but more of that later. It was played on a 14 x 6 foot table, and was a multi-player affair, with three players a side, plus an umpire. While I based the rival forces on the troops I had available, I was also following a cunning plan. Essentially though, the forces were roughly equal, but the French had three extra brigades of infantry, while the Russians had two more brigades of cavalry than their opponents.

The French objective was to defend a road junction, with a Bavarian brigade and a supporting brigade of cavalry on the table at the start, while six more infantry brigades were marching to the sound of the guns. The Russians started with one infantry brigade on the table, another plus a cavalry brigade coming on during the first turn, and another two infantry and two cavalry brigades following on behind them. The Bavarians were divided between two strong points – the village of Geminski on their right and the Piredovichi Convent on their  left. The cavalry covered the gap in the middle (and the road junction) until the reinforcements arrived. Also on the French left flank was another hamlet or farm called Geminski. In Black Powder its notoriously difficult to winkle defenders out of buildings, so clearly these strongpoints would play a key part in the game.

It took time for the  Russians to cross the  stream which ran across their path, and then deploy into attack columns. Two battalions attacked the Bavarian light infantry holding the convent while another two battalions tried to work their way around its flank. This first assault on the convent was beaten back, but the supporting Bavarian units were beaten back, clearing the way for another all-out attack using the Russian Jaeger brigade which had just arrived on the battlefield. By then though, the French “foreign” brigade had arrived to support the defenders, and the leading Irish battalion held off the Russians, buying time for the rest of their brigade to deploy, and break up the Russian attack. This time two Russian battalions broke, so things were starting to look dicey for the Russians. Reinforcing failure, they threw in a third attack , supported by a brigade of Opolcheniye militia, which took on the “foreign” brigade. While the militia did well at first they were eventually pushed back, then broken, as was the brigade attacking the convent. By the end of the game the Russians had lost eight of their original twelve battalions, and the convent was still in Bavarian hands.

Elsewhere on the battlefield another Russian force launched an attack on Geminski. The Russian commanders threw an infantry brigade supported by their Cossacks French right flank. They were held by the Bavarians, aided by a French light cavalry brigade. The horse held up the Russian advance by forcing the infantry into square and then broke one of the Cossack units. Despite using their massed guns the Bavarians were still holding out when the game ended, and reinforcements were moving up to help them. In other words it was another Russian dead end.

That left the centre – and the road junction. A brigade of French chasseurs-a-cheval took on a slow-moving brigade of Russian hussars (which took four turns to advance onto the table), and while the Russians broke one of the two French regiments in the first clash, the Russian brigade soon got into difficulties, and both hussar regiments were broken. The Russians brought up their reserve cavalry – a brigade of cuirassiers – and it finally broke the remaining chasseur-a-cheval regiment. To make matters worse for the French, the Guard had just arrived on the table, and were deploying behind the chasseurs when they broke. The Russian cuirassiers did a “sweeping advance” which crashed into the Chasseurs  a Pied behind them.

Against all expectations the French grognards were swept away. A disaster was only averted by a French line brigade moving up in reserve, which sealed the gap in the line. The cuirassiers pulled back to reform, and the moment of danger passed. By then though it was clear that the Russians were getting nowhere. They’d lost twice as many units as the French, and had become bogged down in isolated fights for the strongpoints, and were nowhere near the road junction. They’d also run out of units in the centre and right. So, victory was duly awarded to the French.

Note from Angus: Now, about that twist at the end. It was only when the game drew to a close that the wily umpire (Bill Gilchrist) announced that the battle everyone had just been fighting was actually a refight of Quatre Bras. The Russians were playing the part of the French, the French were the British and the Allies (the Bavarians being the Dutch-Belgians), and Piredovichi and Geminski were actually the farms or hamlets of Piraumont and Gemioncourt respectively. Apparently, “Perekrjostok”  is Russian for crossroads – which is exactly what Quatre Bras meant too!