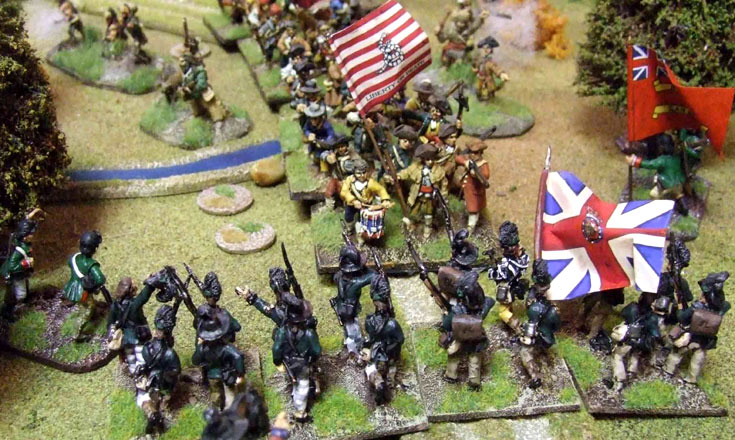 We played this game mainly because we had a lot of Woodland Indians which rarely get used on the tabletop. This historic battle involved the ambush of a small American column, composed mainly of militia, supported by a few Indians and Scouts. The attacking force was made up mostly of Iroquois, Seneca and Cayuga tribesmen, supported by a few Loyalist Rangers and a Loyalist Regiment. The Patriot column also contained a few wagons, and a light gun. Dave Imrie and Jack Glanville commanded the Loyalists, why Dave O’Brien and I took charge of the hapless rebels.

Well, the Americans began the game plodding down the wagon trail, scanning the trees lining the road for signs of an ambush. The firing took them by surprise, and both casualties and disruption points began to mount up. The American brigadier failed every attempt to change his column’s orders from “march” to “engage”, so the head of the column ran straight into the King’s New York Regiment, who poured a volley into the mass of Americans, then followed up with a bayonet charge. These Loyalists (represented by my British Legion infantry for the sake of he game) managed to rout the leading patriot militia battalion, which in turn forced the guys behind to retreat.

Just when it seemed things couldn’t get any worse Jack Glanville’s Indians captured the baggage wagons, and spent two turns ransacking them. This effectively split the American column in two. Dave O’Brien, commanding the rearguard did a great job shaking his militia out into line, and organising something akin to a defensive line. However, it was all up for my vanguard, which was soon skedaddling down the road, pursued by a mob of Loyalists and Indians.

By the end of the evening we decided to draw a veil over the whole sorry affair. My commander – Brigadier General Hirkemer – was doing his best to rally units and remove disruption points, but it was clear his men could manage little apart from saving their own skins.

In the real battle the Americans did rather better, helped by a spot of luck. When things were at their blackest a rumour spread through the Indians that the Americans at Fort Stanwix (a few miles away) had sallied and were looting their camp. They promptly debunked and ran back to protect their possessions, leaving the outnumbered Loyalists with no option but to quit the field.

The rules we used were British Grenadier, which was interesting as two of the four players had been weaned on Loose Files and American Scramble, an excellent little rules system by Andy Callan. In fact British Grenadier used many of the mechanisms of the older set. On the whole it all worked quite well, although we were hampered a little by having to look up rules, or to consult the extensive list of special rules for the scenario. We’ll certainly use British Grenadier again, but we also might run a game with the Andy Callan set, just to see how they work.